The famously sporty president's impact extends through college teams and Olympics to this day.

On October 27, 1858, a small, sickly child was born to a businessman and his socialite wife in downtown New York City. Despite the wealth and prominence of his parents, the heights this young and weak child would reach could hardly be imagined. But young Theodore Roosevelt had a long, prosperous, strenuous life ahead.

Though his parents’ wealth afforded him the best care around, Roosevelt suffered as a child due to his poor health. His frequent asthma attacks almost suffocated him to death. That would be enough to scare anyone into a subdued life, but not Roosevelt. He was determined to overcome his condition and live life to the fullest.

Looking for presidential insights? Sign up for The Archive's newsletter, and get American history delivered straight to your inbox.

First, he exercised regularly to build stamina. Then, he picked up boxing to build strength. Roosevelt soon found that pushing his body to its limits actually helped to quell his asthma. Roosevelt’s physical training came to a halt in 1878 when his father suddenly passed away. After recovering from the loss, he trained twice as hard as before. The young man who was once bullied for his small stature now excelled in boxing, running, wrestling, tennis, and weightlifting. His dedication in sports was paralleled by his enthusiasm in school, where he pursued law.

Roosevelt’s long and successful political career began when he was a student at Harvard in 1876. He would learn how to integrate his many physical activities with his many intellectual duties long before becoming president, and he continued to encourage the American people to pick up sports and incorporate exercise into their daily lives once in office. In fact, President Roosevelt played a big part in shaping American sports culture.

He had a vision of what college athletics should look like–rugged and competitive without being dangerous. The way Americans today view college sports, especially football, is largely due to Roosevelt’s own ideas. His legacy in sports culture is still largely recognized, as exemplified by the NCAA’s highest honor being the Theodore Roosevelt Award. He’s also to credit for securing the first ever Olympics to be held in the United States in 1904.

Under Roosevelt, sports and physical competitions became a part of the national identity. The latest Roosevelt biography, The Strenuous Life by Ryan Swanson, is named after the famous speech he gave in 1899 when he was still governor of New York. In the speech, he emphasized the importance of hardship in order for Americans to appreciate the value of life. Roosevelt wanted every American to train their bodies and minds to be agile and strong, believing that the strength of a nation is determined by the strength of its individual citizens.

Swanson shows how Roosevelt’s deep affinity for the sporting lifestyle permeated every aspect of his life and career–something previously untouched by presidential biographers. Swanson draws a direct line from Roosevelt’s life and presidency to ours today, showing how the 26th president shaped how we regard fitness and athletics in America.

Read on for an excerpt from The Strenuous Life. 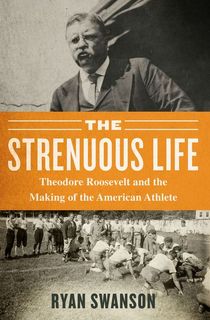 The three words, “the Strenuous Life” gave a name and a pleasantly malleable tagline to the athletic revolution underway in the United States. The phrase was perfect; it had just the right balance of ambiguity, transferability, and panache. It was suitably militaristic. It suggested a choice between a promising but difficult path and one of relative ease. One might compare it to Nike’s trademarked “Just Do It.” And as became the case with Phil Knight’s sneaker slogan, Roosevelt’s words ceased to be his own once he shared them. Original intentions morphed with a multitude of other causes, some of which were downright parasitic. Above all other claimants, however, the advocates for a more robust sports and athletic paradigm in the United States won control of “the Strenuous Life.”

Roosevelt had first unveiled the phrase at Chicago’s Hamilton Club. More than six hundred guests crowded the venue to hear Roosevelt give the “The Strenuous Life” speech on an unseasonably cold April 10, 1899. The speech marked Roosevelt’s arrival as a player on the national political scene. “Seldom, if ever, in Chicago has a more enthusiastic body of men met around the banquet table than the one which met tonight under the auspices of the Hamilton Club,” reported the Associated Press. When Roosevelt took the lectern, the room exploded in applause. “The hall was a mass of waving handkerchiefs and napkins, and the cheers that greeted him as he rose prevented the speaker for many minutes from beginning his speech.” The din continued even as Roosevelt motioned for quiet.

Related: 10 Books About the Kennedys

The crowd, finally done with its long, noisy thank-you to their Rough Riding hero, settled in. Roosevelt took over. He spoke, in his distinctively nasally tenor, always gesturing and pointing and jabbing the air for emphasis, for thirty minutes.

The speech centered on foreign policy and on the future of the Monroe Doctrine. It tested out the tenets of the Roosevelt Corollary, which would be unveiled several years later. Would the United States police the Western Hemisphere? Would the turn-of-the-century generation meet its challenges? “If we are really a great people, we must strive in good faith to play a great part in the world.” Roosevelt urged the United States to build up its military. The Army and Navy needed to be expanded and modernized. “Our army has never been built up as it should be built up. I shall not discuss with an audience like this the puerile suggestion that a nation of seventy million of freemen is in danger of losing its liberties from an existence of 100,000 men,” Roosevelt said.

The speech drew sharp and unfair distinctions. Some Americans, Roosevelt reasoned, would live bold, aggressive lives. Others would “shrink from danger.” The speech contained parenting advice. “You will teach your sons that though they may have leisure, it is not to be spent in idleness…” Roosevelt conceived of the nation as an entity that drew its strength and ultimate direction from its smallest cogs—the individual citizens. “A healthy state can exist only when the men and women who make it up lead clean, vigorous, healthy lives, when the children are so trained that they shall endeavor, not to shirk difficulties, but to overcome them…”

Roosevelt’s idea of the Strenuous Life advocated for strict, patriarchal gender barriers. While men fought, whether in boxing rings or on the battlefield, women remained anchored to the home. “The woman must be the house-wife,” Roosevelt concluded simply, “the helpmate of the homemaker, the wise and fearless mother of many healthy children.” Still, women could fail and disappoint the nation just as readily as men. They could fail to have and raise athletic, physically strong children. “When men fear work or fear righteous war, when women fear motherhood…they are fit subjects for the scorn of all men and women who are themselves strong and brave and high-minded.”

Part of the speech’s appeal, and part of the success of Roosevelt’s emerging persona, came from the clarity. Winners and losers; the strong and the weak; the diligent and the shirkers. The sides were easy to identify, and few missed the message on which path should be selected.

Want more presidential insights? Sign up for The Archive's newsletter, and get American history delivered straight to your inbox.

Roosevelt’s storehouse of varied knowledge shone through the longer he spoke. Civil War tales juxtaposed references to French philosopher Alphonse Daudet. Roosevelt tramped unabashedly between disciplines: history, politics, literature, philosophy, science, educational theory—he owned them all. The core of the speech, even though “the Strenuous Life” would become mostly widely applied to Roosevelt’s athletic ideas, was a specific call to military action in the Philippines. The military victories of the past two years, including Roosevelt’s own in Cuba, demanded US follow-through. “The army and the navy are the sword and the shield which this nation must carry if she is to do her duty among the nations of the earth…” The former Spanish colonies needed order and guidance, whether they wanted it or not. Roosevelt embraced a new order, a new version of imperialism. “Until order and stable liberty are secured, we must remain in the island to insure them,” Roosevelt challenged, referencing Cuba particularly.

Related: That Time A Badger Lived In The White House

Roosevelt shamed his audience toward taking action to solve problems (“If we are too weak, too selfish, or too foolish to solve them, some bolder and abler people must undertake the solution”); he also tried his most inspirational material. Wrapping up the speech, Roosevelt dug once more into his crisis-or-conquest toolbox. “The twentieth century looms before us big with the fate of many nations. If we stand idly by, if we seek merely swollen, slothful ease and ignoble peace, if we shrink from the hard contests, then the bolder and stronger peoples will pass us by.”

But Roosevelt did not see that happening.

Roosevelt approached his presidency the same way he did physical competition. The message he passed on to Americans was the same mantra he had been telling himself his whole life–be the biggest, be the best. Even though Roosevelt’s ongoing medical issues threatened to set back his sports activities, he persevered through them. He was confident that if he could overcome his problems, certainly everyone else could do the same in their own lives. The Strenuous Life is a fascinating new perspective on the 26th president, his beliefs, and how they still impact America’s sporting culture today.

This post is sponsored by Diversion Books. Thank you for supporting our partners, who make it possible for The Archive to continue publishing the history stories you love.