It was one of the most dangerous missions ever undertaken.

Promoted by Open Road Media | By The Archive Staff

Military history is filled with accounts of covert operations conducted behind enemy lines. Few, however, are as extraordinary as the clandestine Allied mission profiled in Damien Lewis' Ghost Patrol: The Ultra-Secret Unit That Posed As Nazi Stormtroopers.

The narrative centers on the September 1942 raid of Axis-held North Africa and General Rommel's key port city stronghold of Tobruk, Libya. Codenamed Operation Caravan, it was part of the spectacular, multi-pronged attack called Operation Agreement. Embedded within this already incredible narrative was a special mission steeped in secrecy carried out by an elite force.

They were known by a number of names during the war—Italian forces dubbed them 'pattuglia fantasma', the Ghost Patrol. Part Special Air Services and part Special Operations Executive, they were most commonly referred to as the Special Interrogation Group, or SIG. Together, the men of this unit executed one of the greatest deceptions of World War II: outfitted as Nazi soldiers, they infiltrated German lines and helped spirit the raiders behind them to their target of Tobruk.

Powerfully written and expertly researched, SAS Ghost Patrol is a breathtaking chapter of WWII history from award-winning author Damien Lewis. The following excerpt opens at the Hatiet Etla basecamp on that fateful September morning, as the men of Ghost Patrol set out on the mission they've trained for: the clandestine raid of Tobruk. 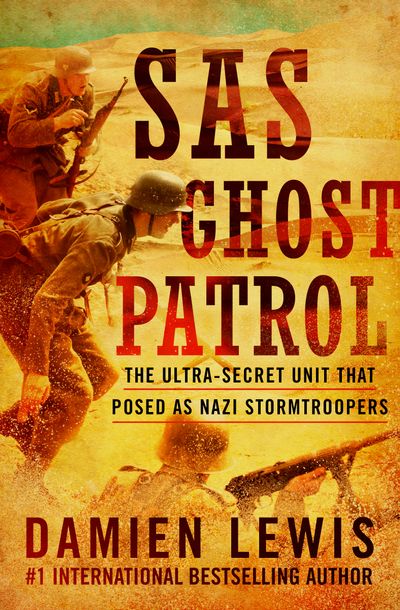 At first light on 13 September 1942 the forces gathered at Hatiet Etla roused themselves for action. On one level this day was no different from so many that had gone before. The sun rose, a golden orb that scorched its way into the cloudless blue sky. Figures wrapped in blankets traipsed in from their sleeping positions, mess tins clutched in hand.

It was a day like any other … except. The tea ration was overgenerous. There were lashings of hot, sweet chai—as much as any man could drink. It put the heart into these desert warriors but underscored the truth: today was different. One way or the other the next twenty-four hours would prove decisive.

A growing tension thrummed back and forth across the warming air. A brisk purposefulness took over, as breakfast kit was packed away and the trucks loaded with gear. Captain Lloyd Owen’s men were already waiting in their Chevys as the commandos stowed the last of their kit. Lieutenant Colonel John Edward Haselden flitted from figure to figure, dispensing a few final pleasantries and encouraging words.

Only the medic, Captain John Gibson, was nowhere to be seen. In fact, he was ensconced with Major Campbell in the sick tent, trying to convince him of the obvious—that there was no way he could lead the Commando on the coming raid. The major was so weak and pain-racked that he could barely shake his head in protest, yet shake it he did. Nothing that the medic might say would hold Campbell back from the fight, not as long as he still had life in his veins.

Gibson gave up: there was no telling the stubborn Scot.

The SIG operators made one last vital check to ensure that several sets of British battledress had been safely hidden in the rear of one of the trucks. These were in case of emergency: if they were ever in danger of being captured they would endeavour to change into those uniforms, to emerge dressed as proper British soldiers.

The spare trucks were being left at Hatiet Etla. From each Lloyd Owen removed the distributor cap, and then—making sure that the entire force was watching—he buried it by the front outside wheel of the vehicle from which it had been taken. If things went awry at Tobruk and the men had to break out into the desert, at least they would know how to get the trucks moving again. Assuming, of course, they could make it back to Hatiet Etla.

The spare food, water, fuel and other kit was piled aboard those trucks: it was more than enough to get a force of men back to Kufra. With a last look around the camp Lloyd Owen climbed into the lead vehicle, Haselden jumped in beside him, and the Long Range Desert Group commander signaled that they should move out.

Six Chevys crawled up the slope leading north out of their place of hiding. Four army trucks followed. One would be abandoned at the dividing of the ways, serving as a rallying point, should Haselden’s force run into any unforeseen disaster.

Related: 9 Essential World War II Books That Examine Every Angle of the Conflict

As the trucks edged out of Hatiet Etla the commandos felt more cramped than they’d ever been so far on this journey. It was unusually silent aboard the vehicles. Ahead of them lay a few hours’ drive, before the final parting of the ways, after which they would take the plunge towards the Tobruk perimeter.

The terrain was open scrubby bush. The concentration of burned and twisted war debris was even greater here, and many of the scorched and blackened vehicles were similar to their own. They moved slowly, so as not to raise a dust cloud that might attract enemy aircraft, but if one did come searching all they would need to do was halt, and with luck they would blend in with the abandoned vehicles.

Mid-morning the LRDG column pulled into a shallow depression. Lloyd Owen had made good progress and it was time for a feed and a kip. The temperature rose and the hours seemed to drag. Figures dozed fitfully, their minds on what was to come. By four that afternoon the camp was on the move, the men restless and febrile. Tea was brewed. A final meal was eaten.

Want more World War II books? Sign up for The Archive's newsletter, and get history books straight to your inbox.

When the two units mounted their vehicles once more, Haselden was no longer riding in Lloyd Owen’s Chevy. Instead, he’d joined Captain Buck in the cab of the leading truck. The parting of the ways had begun.

Vehicles lurched and bumped over the hot, uneven ground. The sun was high in the sky, the heat merciless. But only a few hours of daylight remained, and with sunset they would be heading into Tobruk. The LRDG steered the convoy with ever-greater caution. Eyes scanned the horizon for the first signs of the enemy.

Then they saw it: a lone aircraft dipping low over the horizon. Right ahead of them there had to be an aerodrome, doubtless the one at El Adem, set on the southern outskirts of Tobruk. Once they’d destroyed the enemy’s radio station, Lloyd Owen’s men were slated to raid that airport, taking out the Stuka dive-bombers stationed there.

A second aircraft came in to land. It seemed closer now.

A while later Haselden pointed ahead. ‘The LRDG have stopped.’ Everyone knew what that had to mean.

The lead truck closed in on the six stationary Chevys. Every head was turned in their direction. There was something about the expressions on those weather-beaten, bearded faces. What was it? the men of the Commando wondered. And then they had it: the desert raiders were watching their approach with looks they couldn’t quite hide, ones of disquiet and unease.

The four trucks came to a halt. The men of the Commando could guess how the LRDG warriors were feeling. They weren’t happy to be leaving the commandos to face the cauldron of Tobruk without them.

Bill Barlow jumped down from the rearmost vehicle. ‘Everyone off. Into your positions on the other wagons’.

A chill wind blew, presaging the coming darkness. The commandos moved quickly, working warmth into stiff and cramped limbs. Weapons, ammo and blankets were passed down. They moved ahead, taking up their prearranged places on the trucks in front.

The rear vehicle was driven into some bushes and the distributor arm removed, before being buried next to the front offside wheel. The truck had thrown its fan belt in the last few miles, one of the few mechanical failures they had suffered across thousands of miles of desert. But it should still be good for a last-gasp escape, if the commandos had need of it, and all made a mental note of its location.

From the vantage point of the three remaining trucks, the commandos could see now why Lloyd Owen’s patrol had come to a halt. They were parked just short of a low ridge, known as Ed Duda, and from there they were in sight of the main coastal road. Three or four miles ahead they could see clouds of dust rising in the distance, and tiny specks moving on the highway.

That was it: the road into Tobruk.

And those were enemy vehicles.

Lloyd Owen walked back from his Chevy. Figures converged: Haselden, a stooped Campbell, David Russell, Buck and Langton. They stood together in the chill wind, shivering slightly. For a few moments they talked through the final arrangements—mostly radio communications between the two units—but all knew they were simply trying to put off the moment of parting.

Then Haselden said, ‘Well, goodbye, David. Best of luck, and thanks for everything.’

He held out his hand. His eyes were twinkling almost with amusement, or maybe the bedevilment of the hour. There was not the slightest hint of doubt or fear in his gaze any more. The two figures shook hands, as the men of the Commando and the LRDG prepared to go their separate ways.

There were handshakes all round. What more was there to say? With that the figures turned and in silence returned to their vehicles. Haselden climbed into the rear of the lead truck, so he could be close to his men: a commander with his raiding party.

Lieutenant Tommy Langton clambered into the third truck, pulling on his greatcoat and German forage cap. He slid through the opening in the cab roof and trained his German rifle on the figures in the rear. Mostly, they appeared suitably cowed. But one of them, an irrepressibly cheerful fellow, was singing away to himself softly. Langton strained to catch the words.

‘If you go down to Tobruk tonight, you’re sure of a big surprise …’

Langton told the man to cut it out. He needed them looking and sounding as much like down-cast, dispirited POWs as possible. He could sense their inner strength and fortitude and that their spirits remained high, and if he could detect that, so too could a genuine German guard.

‘Hogan, dishevel your hair a bit!’ he commanded. ‘And Lofty, take that grin off your face. You’re a prisoner of war, you know! Blackman, I can see the butt of your tommy gun. Cover it up, won’t you!’

As he readied for the off, trying to muster an appropriate level of hatred for the English Schweinhunde that he had under guard, Langton saw one of the commandos—a man called Riley—give him a slow wink, which completely nullified the feelings of antagonism and enmity that he was trying to muster.

The quiet was shattered by the roar of engines firing into life. Gears were engaged, accelerators depressed, and the trucks lurched into motion. The convoy crawled past the waiting LRDG vehicles, crested the ridge ahead of them and was gone.

Lloyd Owen’s men watched until the last wisp of dust was caught by the wind. A quiet, brooding foreboding gripped them. They feared for those eighty brave souls who had just passed them by. Some surely would never see another dawn.