Voices from the World of Jane Austen will transport you to the turn of the nineteenth century.

Jane Austen, although best known today for her romances, was an author primarily interested in showing off her biting wit through clever social commentary. She was born in 1775 to a large, close-knit family that lived in England’s Hampshire county. The family often passed the time by reading and staging plays, and Austen showed an interest in these storytelling activities at a young age. She started writing around the age of eleven, producing a large amount of poems, plays, and stories in her youth that she later collected into three notebooks, now known as the Juvenilia. Though writing, especially for profit, was hardly considered an acceptable activity for women at the time, Austen’s family was supportive of her endeavors.

Austen published her first novel, Sense and Sensibility, in 1811, followed by Pride and Prejudice  in 1813. Though the books were well received, Austen had published them anonymously and so lived a life of relative inconspicuousness. Mansfield Park and Emma were also published in her lifetime, with her final two books being published posthumously, after her untimely death in 1817 at the age of 41.

Austen’s novels focus on the British landed gentry. The landed gentry, although wealthy and comfortable, were not nobles–and Austen’s work rarely included any nobility. Pride and Prejudice’s Lady Catherine is one of few.

Austen herself was born to a historically well-respected family whose wealth was rapidly shrinking. As a result, Austen experienced financial instability for much of her life, a theme that she wove into her novels. Her novels can best be described as a mix of romance, humor, and drama, with incisive commentary about the absurdities and hypocrisies of a society obsessed with social standing.

For the modern reader, a full, deepened appreciation of Austen’s witty criticism requires some background knowledge of the world in which she lived. Voices from the World of Jane Austen delivers a comprehensive explanation of Austen’s life and the way society operated in the turn of the nineteenth century. The book draws on letters written between Austen and her family members, as well as previously unpublished material from The Jane Austen Society and the British Library.

Read on for an excerpt from Voices from the World of Jane Austen, then download the book. 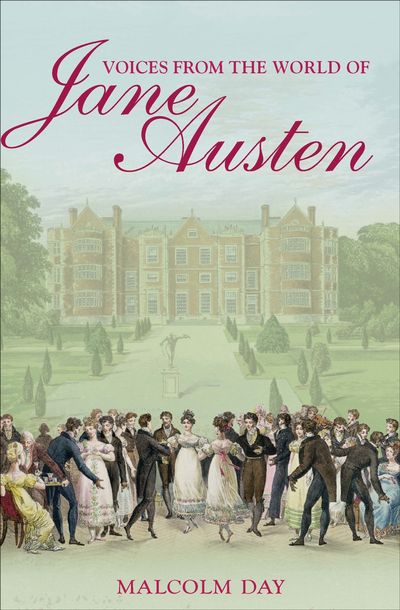 The turmoil caused by love was an evergreen source of entertainment for the Austens and their friends. Indeed Jane found herself to be the subject of attention on one occasion. Shortly after her 20th birthday, during the New Year social whirl of 1796, an excited Jane reported to Cassandra on an evening spent at Deane House in a neighbouring village:

We had an exceeding good ball last night … I danced twice with Warren, and once with Mr Charles Watkins, and, to my inexpressible astonishment, I entirely escaped John Lyford. I was forced to fight hard for it, however. We had a very good supper, and the greenhouse was illuminated in a very elegant manner … I wish Charles [their brother] had been at Manydown, because he would have given you some description of my friend, and I think you must be impatient to hear something about him.

Related: 20 Influential Women in History You Need to Know About

The friend in question was an Irishman, Tom Lefroy, a bright, handsome 20-year-old studying law at Trinity College, Dublin. He was spending a holiday with his uncle and aunt-in-law at the rectory of Ashe, a village near Jane’s family home at Steventon. Jane had a close relationship with Cassandra, who was just two years her elder and was then engaged to be married. Jane must have felt even better able than usual to confide in her sister about romantic feelings, knowing she was in love herself:

You scold me so much in the nice long letter which I have this moment received from you, that I am almost afraid to tell you how my Irish friend and I behaved. Imagine to yourself everything most profligate and shocking in the way of dancing and sitting down together. I can expose myself, however, only once more, because he leaves the country soon after next Friday, on which day we are to have a dance at Ashe after all. He is a very gentlemanlike, good-looking, pleasant young man, I assure you. But as to our having ever met, except at the three last balls, I cannot say much; for he is so excessively laughed at about me at Ashe, that he is ashamed of coming to Steventon, and ran away when we called on Mrs Lefroy a few days ago.

Tom Lefroy, normally shy and quiet, was teased about the fling he was having with Jane, though he was so taken by her charm that he felt compelled to pay her a visit the following morning. If the heart strings hadn’t been fluttering before, they certainly were now. In a few days’ time the promised dance at the Ashe ball would be upon them and Jane was in high spirits:

Our party to Ashe to-morrow night will consist of Edward Cooper, James [Jane’s brother] (for a Ball is nothing without him), Buller, who is now staying with us, & I—I look forward with great impatience to it, as I rather expect to receive an offer from my friend in the course of the evening. I shall refuse him, however, unless he promises to give away his white Coat …

With affected nonchalance Jane endeavoured to protect her pride in case she received no such ‘offer’ of marriage by stating in advance how little this dashing Irishman meant to her. He had turned up at her house in a white overcoat, which Jane playfully dismissed as vulgar, but the signs are clear that she was hopeful. Furthermore, the same jocular tone continued when she said she wished to dispense with all other suitors:

Tell Mary [her friend Mary Lloyd] that I make over Mr Heartley & all his Estate to her for her sole use and Benefit in future, & not only him, but all my other Admirers into the bargain wherever she can find them, even the kiss which C. Powlett wanted to give me, as I mean to confine myself in future to Mr Tom Lefroy, for whom I do not care sixpence …

Friday.—At length the Day is come on which I am to flirt my last with Tom Lefroy, & when you receive this it will be over—My tears flow as I write, at the melancholy idea.

Despite the characteristic tone of jovial optimism, it seems her inner feelings betrayed a measure of realism, if not despair, at the notion that all would come to nought. After this letter there is a silence about what happened next. Presumably Tom Lefroy did not propose. The next we hear about him is two years later when he was staying again at Ashe, without seeing Jane. His aunt-in-law Mrs Lefroy came to Steventon and Jane was able to catch up on the news, as she wrote in a letter to Cassandra:

I was enough alone to hear all that was interesting … of her nephew she said nothing … She did not once mention the name of [Tom] to me, and I was too proud to make any enquiries; but on my father’s afterwards asking where he was, I learnt that he was gone back to London in his way to Ireland, where he is called to the Bar and means to practise.

However, behind the scenes Mr and Mrs Lefroy, as acting hosts to their nephew and therefore responsible for him in the absence of his parents, were alarmed at the proceedings unfolding before their eyes. Underneath the playful ribbing dealt out to Tom, his guardians were anxious about the possibility that this penniless youth might, in a rush of blood, propose to a girl who herself had no dowry to speak of.

When his parents discovered what had been going on, they severely reprimanded their son for leading Jane on when he was in no position to propose marriage, having no prospect of an income for some time to come. Tom was packed off to London to live under the roof of his great-uncle while studying law at Lincoln’s Inn. In time he did become a successful barrister, his long career culminating in the position of Lord Chief Justice of Ireland. He married happily but never forgot Jane, for whom he admitted he had had a ‘boyish love’.

This excerpt is from a section of Voices from the World of Jane Austen titled “Marriage, Wealth, and Breeding”. The topic of marriage is a major component of Austen’s novels, with the tension between marriages of love and those of convenience forming the backdrop for most of the conflicts. This passage shows that as much as Austen satirized love and marriage, she was not immune to the passions and drama that afflicted her own characters.

Voices from the World of Jane Austen is an absorbing read that will give you a true understanding of the complexities of the author’s time period. To learn more about Jane Austen’s world, download the book today.