James Baldwin, Ernest Hemingway, and other writers were investigated for everything from sympathy towards the Cuban Revolution to Communist Party ties.

In the height of J. Edgar Hoover’s FBI, men and women armed with a pen were sending shockwaves down the government agency’s spine. Accused of spreading ideals that supported communism and anti-war efforts—among other “dangerous thoughts” of the time—the FBI started surveying certain authors they considered to be a threat.

Included in this list were literary giants like James Baldwin, Ernest Hemingway, Ray Bradbury, Susan Sontag, and more. Some, like Baldwin, knew they were being surveyed—while others had no idea. MuckRock obtained the files through a Freedom of Information Act request, giving the public access to the pages and pages of surveillance the FBI did on these authors. The new book, Writers Under Surveillance: The FBI Files, collects the files of 16 authors—spanning from writers in the early 1900s to those still active today. The following four writers were targeted by the Bureau for everything from potentially writing an exposé to visiting enemy territory during a war.

Writers Under Surveillance: The FBI Files 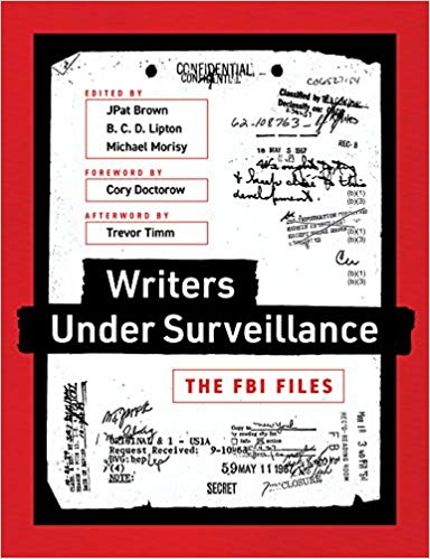 Baldwin was a novelist and playwright, known for his social criticism. His first novel, Go Tell It on the Mountain (1953), is one of his most popular stories, as is Giovanni’s Room (1956)—which was met with much controversy at the time of its publication due to its explicit sexual content involving two men.

In a 1964 interview with Playbill, following his Broadway run of Blues for Mister Charlie, Baldwin mentioned that he was planning to write a book on the FBI. The thought of a potential exposé terrified the Bureau, spurring their own investigation into the author. Accused of being a communist, the FBI went on to collect thousands of pages on Baldwin before dropping the case a decade later.

Arguably best known for his science fiction story Fahrenheit 451, Ray Bradbury started being surveyed by the FBI when they suspected him of being a communist sympathizer. Though you’d think his commentary on censorship in Fahrenheit 451 would draw interest from the FBI, Bradbury wasn’t on the Bureau’s radar until 1956—three years after the publication of his popular book—when he was named as a literary figure possibly involved in the Cultural Congress of Havana in Cuba.

Though the FBI could not find proof of his membership to the Communist Party, they scrutinized his writing—looking for hidden messages. Using a comment Bradbury once made about the ridiculousness of making members of the Screen Writers Guild swear they were not members of the Communist Party, informant Martin Berkley twisted Bradbury's words and actions to make it seem like the author used his own science fiction stories to instill fear in Americans.

Susan Sontag was a writer and social critic, flagged by the FBI for her anti-Vietnam War efforts. Her file begins in 1968 after she was arrested for “disorderly conduct” following a protest. Even more, the FBI was tipped off that Sontag travelled to Northern Vietnam after receiving an invitation from their government, which was a violation of her passport at the time. Though they initially lacked evidence, the trip was essentially confirmed when an Esquire feature was published—depicting her trip to Hanoi and her conversation with Prime Minister Pham Van Dong.

The investigation stretched on for two years after that, until a final report—dated in March 1972—stated that Sontag was more of a nuisance than a credible threat, and speaking to her might cause embarrassment for the Bureau since she was writer.

In contrast to the other writers on this list, Hemingway actually acted as an FBI informant while living in Cuba. Moving to the island after finishing For Whom the Bell Tolls, published in 1940, Hemingway began working for the American Embassy in Havana after forming a relationship with Ambassador Spruille Braden. He recruited barmen, waiters, and others for the low-budget program, which was unimpressive to the Bureau. At one point, Hemingway referred to a government official as a member of the Gestapo, and also constantly showed his contempt for the Bureau. Even J. Edgar Hoover stated that it would be the last time they would use someone like Hemingway as an informant.

Despite his connection to Cuba, it seems that the FBI did not think that Hemingway had “communist leanings.” After his ties with the Embassy were cut off in April of 1943, Hemingway was still doing work for the Navy, before going on to publish The Old Man and the Sea and win the Nobel Prize in Literature.

Want to learn about more writers who were under surveillance? Download the book now.

Writers Under Surveillance: The FBI Files

This post is sponsored by MIT Press. Thank you for supporting our partners, who make it possible for The Archive to continue publishing the history stories you love.