A Mother's Love Became Her Most Valuable Weapon

New York's first and only legislative divorce was granted to Eunice Chapman in 1818, along with custody of her children.

In 1814, a young woman named Eunice Chapman returned to an empty home in upstate New York. Her three children, along with their father, were nowhere to be found. Chapman quickly learned that her husband, James Chapman, had absconded with the children to a Shaker enclave in Enfield, New Hampshire.

In early 19th century America, Chapman would normally have to accept with the fact that she would more than likely never see her children again. Married women during this time had extremely limited rights, and their children were considered the property of their fathers. However, the love and concern this mother had for her children would push her to change the law and history forever.

Not long after this ostentatious display, lawmakers in Albany began heatedly debating the status of Chapman's marriage and the fate of her children. Rather than allow her husband to take her children away from her and into a religion she despised, Chapman fiercely fought with politicians to gain the right to have custody. The country’s most cherished virtues, from freedom of religion to the sanctity of marriage would be up for debate, but most importantly, the concept of motherhood would take center stage.

The Great Divorce chronicles the five-year battle Chapman undertook with lawmakers, her husband, and the country. The story not only follows Chapman's fight, but also highlights the importance of motherhood and how many ideas surrounding the vocation changed thanks to her battle. Chapman's divorce would not only be the first in New York State history–it would also be the first to prioritize a mother's custody of her children.

As written by Ilyon Woo, Chapman's ordeal is pieced together by letters, newspapers, and Shaker diaries that recorded the time. This moving story is sure to be a relatable read for any mother who has fought tooth and nail for her children, or any child who has realized the depth of their mother's love.

Read an excerpt from The Great Divorce, then download the book. 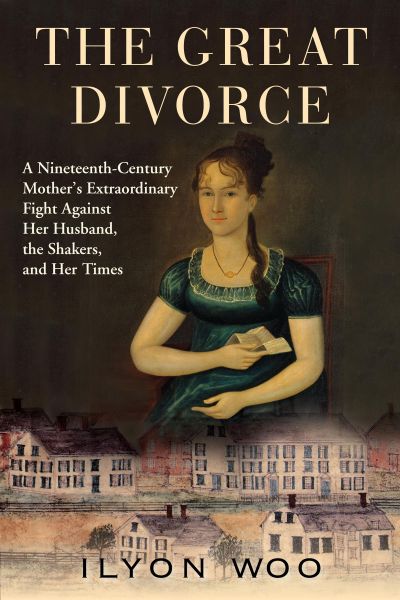 Five years after the children first disappeared, it had come to this: a hundred strangers circling the Shaker village, torches lit. It was an unseasonably cold night for May, with snow on the ground for reasons no one could explain. The intruders crouched along the trim white fences, hovered by the low stone walls, and rode their horses around the village’s periphery, marring the strange spring snow. It was said that five hundred more might come by morning.

Leading the mob was the mother of the missing children, Eunice Chapman, a woman so small that she might have been mistaken for a child herself, her eyes scanning the darkened village. Somewhere here—in one of the closed workshops or barns, or perhaps in the looming, four-story dwelling where the Shakers spent their nights—was her former husband, James, and with him, the children he had stolen from her: Julia, Susan, and George.

Related: 20 Influential Women in History You Need to Know About

The Shakers were saints, James had declared, but to her, these so-called Believers were as far from holy as they could be: They were responsible for separating her from her family, and for hiding her children. Now, after a long search and years of legal warfare, she was closer than she had ever been to bringing her children home. She would do whatever was required. As she had warned the Shakers two days before, “I will scare you yet and make you tremble."

But James was equally resolute. He had once declared that he would sooner kill himself than give up his children, and days earlier had announced that he would rather send his children floating down the river than see them reunited with their mother. By law, children rightfully belonged to their father, and James Chapman had no intention of surrendering his kin.

There had never been much love between the Chapmans, not even when they were courting more than 15 years earlier. Yet even when the gulf between them had been widest—when the two would sleep on separate floors of their home or James would sleep with other women, when Eunice would threaten James and he would spit into her face—they had never imagined that they would come to blows like this, with hundreds gathered on either side of them, and with everything between them distorted by the glare of torchlight.”

The story leading to this standoff begins with America in a time of revolution. The United States was at war with the British during the so-called “Second American Revolution,” or the War of 1812. The government was nearly bankrupt and a spirit of speculation was running high, propelling the country toward its first financial crash, the Panic of 1819. Gleaming new steamboats dotted the nation’s harbors, and freshly paved roads led the way out West, testament to the transportation revolution then under way.

Even legal tradition was coming unmoored as Americans, newly released from the constraints of British rule, sought to define justice in their own terms. And all across the country, religious revivalism raged, stoked by the hopes and anxieties of a people who yearned for something definitive, if not in this life, then in the hereafter.

It was during this period of unrest and discovery that Eunice Hawley Chapman—a woman born two years into the War for Independence, on November 22, 1778—began a revolution of her own, one that eventually made her known across the country. It started when her husband, a troubled merchant named James Chapman, sought to join the Shakers near Albany, New York, and resolved to take his children with him.

Today, the Shakers are remembered mainly for their handiwork—oval boxes, straight-back chairs, and spare, modern-looking furniture that has sold for hundreds of thousands of dollars apiece. Other products of Shaker culture are also familiar, if not always recognized as Shaker, such as the song “Simple Gift,” popularized in Aaron Copland’s Appalachian Spring. In contrast, the people behind these objects have largely been forgotten. As Shaker Sister Mildred Barker once remarked, she “almost expect[ed] to be remembered as a chair or a table.”

In the second decade of the nineteenth century, however, the Shakers were a vibrant order, several thousand strong and growing, with sixteen communities stretching across eight states—from Maine to Indiana and down to Kentucky. And they were hardly the exemplars of American culture they are now. Even then, the Shakers were known for their excellent wares, but they also aroused deep controversy on account of their radical religious beliefs.

Brought to America by the charismatic English visionary Ann Lee, the Shakers believed in the continuing revelation of Christ—that one’s relationship with God was determined not by books or creeds but by the present experience of the divine. They believed in perfectibility, that as Believers they could overcome sin, and that together they could create a heaven on earth. What made the Shakers radicals, however, was not merely their religious “enthusiasm,” or their belief that salvation could be guaranteed, but the extreme mandates of their faith. All Shakers were required to renounce their sexuality, property, and family as the first step toward being liberated from earthly sin.

When James Chapman decided to bring his children into this unorthodox society, there was little that his wife could do to oppose him. In the 1810s, children were the exclusive property of their father—heirs, as well as sources of social security. Decades would pass before mothers had any rights to their children, let alone custodial preference in the eyes of the law. Wives, too, belonged to the husband and had few legal rights. Given James’s decision, Eunice's only real options were to join the Shakers to be with her children or give up her family and prepare to live alone.

But Eunice Chapman was an uncommon woman. Famously seductive, willful, and canny, she learned through difficult experience what was expected of her as a woman and how to exploit those expectations. She turned feminine weakness into a source of political strength, using every strategy available to her—including some forbidden ones—in her quest for her children.

From 1814 to 1819, this determined mother—a “modern enchantress,” as she was called by some, or an “ornament to her sex,” as she was known to others—waged a war against her husband, the Shakers, and the law and culture of her times. Rather than stay out of the public sphere, as women were supposed to do, she fought her way through courtrooms, wooing politicians and drawing the attention of such luminaries as Thomas Jefferson and Martin Van Buren. She whipped up a mob, staged a kidnapping of her own, and—perhaps most skillfully—penned thrilling tales of Shaker bondage that sensationalized her story. Throughout, she succeeded in making her case about much more than herself, convincing the leaders of her state and the public beyond that freedom of religion, the sanctity of marriage, feminine virtue, and even democracy were at stake. This, in the end, enabled her to achieve a landmark legal victory that granted her unprecedented rights as a wife and mother and put her more than a century ahead of her time.

This thrilling book uncovers an undertold story that changed America's views of motherhood and womanhood. James Chapman, once an abusive and alcoholic husband, found sanctity in the Shaker community. His wife, Eunice, at first thrilled by his newfound abstinence, soon became disenchanted with the Shakers. Rather than relinquish her husband and children to a faith she abhorred, she chose to take her fight to the legal system. With one side representing motherhood and love, and the other religion and privilege, both Eunice and her husband weaponized their ideals in the fight for their children. To learn more about this fascinating piece of American and women history, download the book today.

American Historywomen in historyBook Recommendationbook excerpt
Published on 07 May 2019