Ulysses S. Grant: The Man Who Secured the Union’s Victory in the Civil War

Ulysses S. Grant graduated from West Point in 1843 with every intention of resigning his commission at the end of his four-year term. But three years later, his conviction faltered, as the Mexican-American War showcased his prowess as a daring and intelligent soldier. His leadership positions and studies under great military strategists further convinced him that his place was, in fact, in the army.

When the Civil War began in 1861, Grant was offered a captainship—though he turned it down, hoping for a higher-ranking position. He quickly achieved his goal, becoming a military aide to Governor Richard Yanks, and then shot up through the ranks. Not long after, he was the commander of the District of Southeastern Missouri, and his fearlessness in battle caught the attention of none other than President Abraham Lincoln.

During the first year of the war, Grant focused on gaining access to the Mississippi River. Though the Confederate Army held Columbus, Kentucky—which inhibited the Union’s movements downriver—Grant concocted a plan that would enable them to keep advancing south. Per Grant’s orders, his army circumvented the city, pushed on toward the Cumberland River, and clinched the first major Union victory: the surrender of the Confederate-held Fort Donelson. Grant’s success only grew from there, earning him a promotion to Major General and the nickname “Unconditional Surrender Grant.”

But while Grant and his troops prepared for their next substantial battle, the Confederates attacked, catching them by surprise. The conflict—now called the Battle of Shiloh—was the deadliest in American history at the time. The number of casualties not only stirred nationwide controversy, but it also marred Grant’s reputation as a hero.

Despite the heavy losses and blow to his status, Grant continued pushing on. In 1863, Lincoln handed him the reigns of the new Division of the Mississippi, which included the armies of the Ohio, the Tennessee, and the Cumberland. A succession of impressive victories earned him a promotion to the prestigious rank of Lieutenant General, whereupon he commanded all of the Union’s armies and answered directly Lincoln.

The year 1865 brought Grant’s most significant victory—the surrender of the Confederates’ formidable general, Robert E. Lee—and the end of the Civil War. During the next four years of peace, he continued his post as commander of the army, overseeing the Reconstruction and addressing any military threats. His legacy reached even greater heights when, in 1869, he became the 18th President of the United States.

Grant Moves South is the story of Grant’s rise within the army and the development of his brilliant military strategies. Drawn from military communications, eyewitness accounts, and even Grant’s own writings, author Bruce Catton paints a multi-faceted portrait of a great American hero. The following excerpt takes you to the fateful morning of April 6, 1862, as Grant prepares for the notoriously bloody Battle of Shiloh. 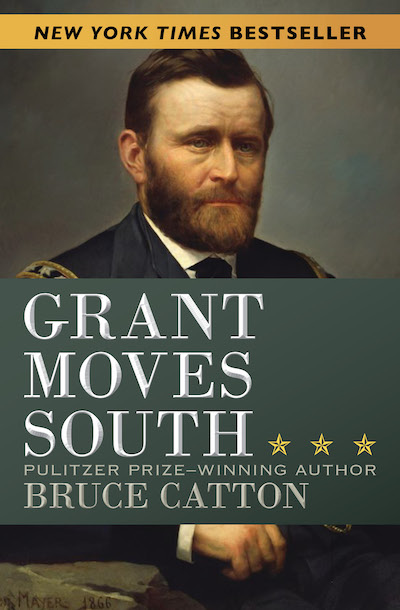