Get Inside The Mueller Report With Alan Dershowitz's Legal Insight

The long-awaited report is here.

Nearly two years ago, James Comey was dismissed from his position as the director of the Federal Bureau of Investigation by President Donald Trump. The ensuing firestorm, with which any U.S. citizen is familiar, led to the appointment of Robert Mueller as special counsel to report on any illicit connections between the Trump administration and the Russian government.

Want more political insight? Sign up for The Archive's newsletter to get fascinating history stories and enthralling book deals.

The special counsel’s investigation, popularly known as the Mueller Report, has been eagerly awaited by commentators on both sides of the aisle. When a redacted version was released to the public on April 18, legal experts (armchair and otherwise) rushed to give judgement. Among those experts was Alan Dershowitz, perhaps most notably known for his work on the O.J. Simpson murder trial.

Related: The Best History Book Deals of the Month

Read on for an excerpt of The Mueller Report with foreword by Alan Dershowitz, then download the book. 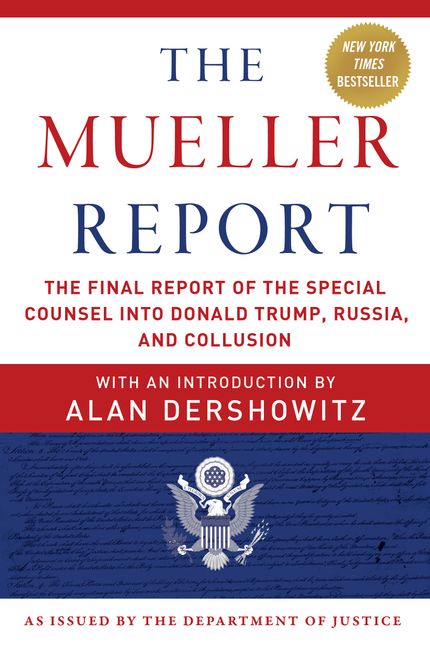 The strangest part of the report—unprecedented to my knowledge—is the dual and dueling presentations regarding obstruction of justice. One group within the Mueller team apparently concluded that President Trump did not obstruct justice. A second group apparently concluded, based on essentially the same evidence, that the president did obstruct justice. Robert Mueller himself has apparently concluded that he won’t conclude or side with either group, leaving it up to the attorney general and ultimately the American people to decide which group gets the better of the argument. Only law professors will be happy with this non-resolution, because we can assign both analyses to our students and have them debate the issues. But the administration of justice is not a classroom or a moot courtroom. I am willing, however, to play law professor—a role I played for fifty years—and grade both sides of the arguments that form the basis of the report on obstruction of justice.

To understand my grades, it’s important to understand an important principle of criminal law that is being widely misunderstood by commentators: Every crime, including obstruction of justice, requires both an actus reus (a criminal act) and a mens rea (an unlawful—and in the case of obstruction, a corrupt—intent). Before a prosecutor gets to the intent, he or she must first establish an illegal act.

The ancient principle of nulla poena sine lege stands for the proposition that no one can be punished for doing an act that is not prohibited by law. This principle has been characterized as “one of the most widely held value judgements in the history of human thought.” Under that rule, prosecutors don’t get to charge people with crimes based only on their state of mind—thought crimes. There must first be proof of an illegal act.

Applying that principle to obstruction of justice in general, and to President Trump’s firing of James Comey in particular, leads to the question of whether a president exercising his constitutional authority to fire a member of the executive branch can ever constitute the actus reus of a crime, without regard to the mens rea. In other words, if the president was authorized to fire Comey—and he clearly was—does his motive or intention in doing so matter?

That question was presented to the special prosecutor in the investigation of President George H. W. Bush. President Bush exercised his constitutional authority to pardon former secretary of defense Casper Weinberger and others who were about to stand trial for their roles in the Iran-Contra scandal. Special Counsel Lawrence Walsh condemned their pardons as part of the “cover-up” and “deception and obstruction.” But he did not charge Bush with obstruction of justice, presumably because he believed that the act of pardoning cannot be a criminal act, regardless of the intent, because the act of pardoning is authorized by the Constitution.

The same is true of the act of firing Comey, which the president had the authority to do, as Comey himself has acknowledged. But here, Mueller’s report concludes that the firing of Comey presented a close question. That is because the report interpreted constitutional law incorrectly.

The report cites a handful of lower-court cases, all wrongly decided in my view, for the proposition that “an improper motive can render an actor’s conduct criminal even when the conduct would otherwise be lawful and within the actor’s authority.” (Disclaimer: I litigated one of those cases.) This wrongheaded conclusion contradicts hundreds of years of precedents requiring that the act itself must be unlawful—the concept of actus rea discussed above—and that an improper motive cannot convert a lawful act into a crime. Even if that were not true for an ordinary citizen, it is certainly true for the president of the United States, who has constitutional authority under Article II.

It would damage our system of checks and balances and separation of powers if prosecutors or Congress could turn a president’s improper motives into a crime. Presidents are motived by a range of factors: reelection, financial gain after leaving office, potential book contracts, paid speaking engagements, a desire to do favors for friends, a wish to hurt enemies. The list goes on and on. More importantly, who should have the power to probe a president’s motives if the act itself is lawful? Going back to President George H.W. Bush, his pardoning of Casper Weinberger and others was clearly improperly motivated. The special prosecutor so concluded. And yet, nobody tried to turn the “improper motive” into a crime because the act of pardoning itself was constitutionally protected.

The Mueller Report correctly concludes that there are no Supreme Court decisions or even Department of Justice positions that directly resolve the issue of whether “the president’s exercises of his constitutional authority to terminate an FBI director and to close investigations” can constitutionally constitute an obstruction of justice. The report also acknowledges the principle that “general statutes must be read as not applying to the president if they do not expressly apply where application would arguably limit the president’s constitutional role.” And it correctly concludes that “the obstruction statutes do not disqualify the president from acting in a case simply because he has a personal interest in it or because his own conduct may be at issue.” As the Department of Justice has made clear, “a claim of conflict of interest standing alone cannot deprive the president of the ability to fulfill his constitutional function.”

Those three principles should end the matter. In the absence of a contrary precedent, the general obstruction of justice statute should not be deemed applicable to the commission of an act by a president authorized by the constitution, even if it was self-serving. This conclusion applies not only to the firing of Comey, but to all actions taken by President Trump pursuant to constitutional authority under Article II.

Does this mean that a president can never be charged with obstruction of justice? Of course not. President Nixon could properly have been charged with obstruction of justice because he went well beyond his constitutional authority by telling his subordinates to lie to the FBI, by destroying evidence, and by authorizing the payment of hush money to potential witnesses in a criminal case. The Mueller Report seems to agree, saying that “Congress can permissibly criminalize certain obstructive conduct by the president, such as suborning perjury, intimidating witnesses, or fabricating evidence. . . .” But that is not what President Trump has been accused of by the Mueller Report. What he is accused of—especially in firing Comey—is far more analogous to the pardoning decision made by President Bush. The Bush case demonstrates that if a president only engaged in conduct authorized by Article II—such as pardoning or firing—then he cannot be charged under the general obstruction of justice statute. That is the better view of the law. That is the view taken by Attorney General Barr and, in my opinion, the view that all civil libertarians should support. But that is not the view taken by the Mueller Report.

It is shocking that the Mueller Report never discusses the difference between the Nixon and Bush cases. That difference is central to a proper application of the obstruction of justice statute to presidential decisions. It draws a clear line between presidential acts that are within the authority of Article II, such as pardoning and firing, and presidential acts that fall outside Article II authority, such as bribing witnesses, suborning perjury, or destroying evidence.

Want more political insight? Sign up for The Archive's newsletter to get fascinating history stories and enthralling book deals.

So, my grade for the Mueller Report’s legal analysis of obstruction of justice is a C+ (with grade inflation). My grade for factual analysis is a B+. My overall grade is a B-.

Now it remains to be seen how this flawed report will be used and misused for partisan purposes. Already, some are calling it a “road map” for impeachment or further partisan congressional investigations. That is precisely why it is so dangerous to civil liberties and the rule of law to release reports by special counsel detailing noncriminal wrongdoing by subjects of a one-sided investigation who were not charged.

The response to the Mueller Report by the Trump legal team will soon be released and may lend some balance. So, read them side by side and decide for yourself.

A personal word before I end this introduction. I have been commenting on TV, in books, and in op-eds from day one of this investigation. As a liberal Democrat who voted for Hillary Clinton in 2016 and for Democrats in the 2018 midterms, and as a civil libertarian who cares deeply about the fair application of the rule of law to all, I have tried to apply neutral, nonpartisan principles to my analysis of the legal and civil liberties issues surrounding this investigation. My predictions—most importantly that Mueller would find no crimes but that his report would be extremely critical of the president and his associates—have proved true, whereas the predictions of many other commentators and pundits have proved false. This is not because I’m any smarter than others, but because I have refused to substitute partisan wishful thinking for neutral analysis of the law and facts. We are moving toward a dangerous world in which neutrality is condemned and hyper-partisanship is praised. I hope this introduction passes what I call “the shoe on the other foot test,” meaning that readers believe that I would have written essentially the same introduction if a special counsel had published a similar report about a President Hillary Clinton. I leave it to readers of the Mueller Report to decide whether it passes the shoe on the other foot test.

This post is sponsored by Skyhorse Publishing. Thank you for supporting our partners, who make it possible for The Archive to celebrate the history you love.