Despite widespread adulation of Germanicus, many mysteries about the capable leader remain.

In the long line of Caesars, there are many notable figures. Some are more memorable than others, and each contributed to Rome's culture and its lasting memory. The Roman Empire of antiquity was never an entirely stable entity. During the Julio-Claudian dynasty, matters weren't altogether peachy. The period was marked with subversion, acts of assassination, and other political turmoil. Fraught with unrest from numerous sides, the nation's borders also faced militaristic upheaval.

Germanicus Caesar (15 BC-19 BCE), a soldier with potential and the connections to climb through the ranks, appeared on the scene. As he hewed down his opponents among the Pannonian, Dalmatian, and Germanic tribes across Europe, he carved out a name for himself.

The son of the Roman general Nero Claudius Drusus, Germanicus was practically destined to follow in his father's military-minded footsteps. As the adopted son of Emperor Tiberius, he found his way into politics for a time. He acquired the position of consul, a role which involved military ability as much as it did the running of the government.

As per the layout of Roman law, he was one of a pair of consuls co-equal in liberty and political influence. And as such, Germanicus would have been obliged to have a hand both in the arena of legalities and in the field of battle.

Rather on the youthful end as far as consuls were concerned, Germanicus served his term in 12 BCE, in the era of Emperor Augustus's reign. Under Augustus, many sociopolitical, economic, and architectural aspects of Rome underwent a good deal of change. Following his stint as a consul, Germanicus was tasked by Augustus to lead eight legions on the Rhine River.

Related: This Was the Average Day For An Ancient Roman Soldier

Germanicus married Agrippina the Elder, the granddaughter of Augustus—at the emperor’s direction. Agrippina mothered nine children during their marriage. Many of those children were born in army camps while Germanicus was in active service. Agrippina always accompanied her husband from Rome to the various camps.

One of their most infamous children was born within this army community—Gaius Caesar Germanicus. As a child, Gaius was known to dress up in a soldier's attire like his father. Because of this, he got dubbed Caligula, meaning “Little Boots.” Caligula was destined to become the future emperor of Rome, and one of the most notorious at that. Ironically, his own military career did not nearly live up to the accomplishments of his father. Caligula's so-called Victory over the Sea, for instance, adds weight to the idea that he wasn't mentally unstable. He would make a name for himself, but not in an honorable way.

In 14 BCE, Emperor Augustus died, leaving Tiberius as his immediate successor. On receiving word of the former's demise, the men under Germanicus started an uprising. Some of the more western legions viewed him with esteem, saying they would follow Germanicus over Tiberius if given the chance. But Germanicus turned down their proposal. Meanwhile, he had to make a move to appease the collective body of legions.

Germanicus tried several ploys in an attempt to persuade the legionaries to reunite themselves to the Emperor's cause. One idea he put to the test was the forging of a document from Tiberius himself meeting the criteria raised by the soldiers. This included payment. With the promise of this settlement, Germanicus regained rapport with his men. But the solution was short-lived.

Once envoys from Rome appeared on the scene, the legions found out that the previous message from Tiberius had been nothing but a ruse. Indignant from this news, the soldiers stormed right into Germanicus’s dwelling, while Agrippina and Caligula watched. They resorted to threatening Agrippina and the boy. At this, Germanicus passionately implored his soldiers to let his spouse and child leave untouched.

The plea that ensued touched its listeners and won over the hearts of the irritated legionaries. Germanicus was able to worm his way out of a massive rebellion through the use of his rhetoric and reason. His political mindset was far from wasted in the army. A personality such as Germanicus’s is that of a natural leader, an individual who can accumulate great power under his control. Nevertheless, his activities—like those of so many of the ancient Romans—were often two-faced.

After the mutiny had been suppressed, the notion of executing rabble-rousers was raised and brought before Germanicus. In this matter, he gave no order, nor did he influence those under his command in what they should do with the instigators.

Germanicus was as sharp a planner as he was vigorous a fighter. Following the Rhine rebellion incident, he got his men back on the move. The Roman legions successfully routed the Germanic Marsi tribe. Germanicus then achieved another victory over the Chatti tribe which his armies annihilated. The same year, he met with Arminius, the chief of the German Cherusci tribe, the man known to have defeated three legions and to have killed General Publius Quintilius Varus.

Their negotiations were largely unfruitful. Then, in 16 A.D., Germanicus won two major victories against Arminius through risky maneuvers. Rome declared Germany a defeated nation and claimed it as a province of the Empire. Germanicus returned to Rome in 17 A.D. where he was acclaimed for his victories. The next year, he was designated as consul once again. On this occasion, his co-consul was Emperor Tiberius himself. This move signified that Germanicus was meant to be the heir to the Empire.

His career was cut short when, while on a mission at Antioch, he died on October 10, 19 A.D. under peculiar circumstances. Substantial works such as Lindsay Powell's Germanicus: The Magnificent Life and Mysterious Death of Rome's Most Popular General have taken an in-depth look into this event. 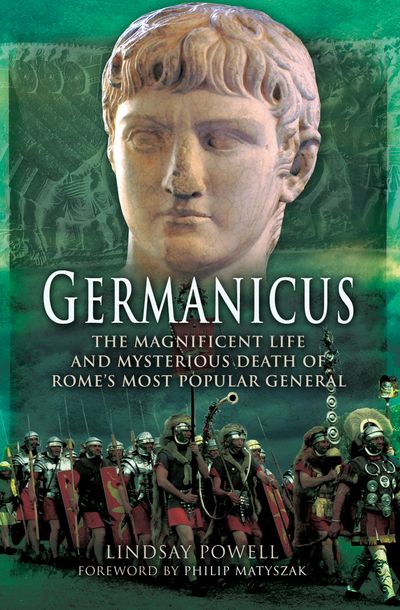 Bruising and foaming saliva were among the suspicious markings found on the body. Those who were close to Germanicus suspected that he had been poisoned and that Tiberius was behind it. Reasons that could have contributed to this hypothetical assassination included Germanicus’s popularity and his recent repealing of imperial regulations on Egyptian grain costs.

The death of Germanicus has been compared to that of the Greek Alexander the Great. Both had been renowned military figures. Like Germanicus, the death of Alexander was steeped in controversy as to whether a valid illness or some sort of poison was responsible. Both leaders were said to have died around the same age as well.

Though he never had the chance to ascend to the position of Emperor, Germanicus left a legacy behind in both his memory and his bloodline. Unfortunately, his descendants were not known for being admired. Caligula became labeled as a madman and was eventually assassinated by the Praetorian Guard.

Germanicus’s daughter Agrippina the Younger went on to become the mother of Emperor Nero. He too met with an ignominious end, committing suicide and bringing a close to the Julio-Claudian dynasty.