American History Myths Are Unraveled in This Charming Read

Debunking far-fetched tales that we've believed in for far too long.

As we continue on through the Information Age, a world of knowledge lives just one click away. But how can you be so sure the knowledge you're accessing is correct? Misinformation is more widespread than you think. Beyond sloppily edited Wikipedia pages and poorly researched blogs, enduring half-truths are also unknowingly passed down, even in places like classrooms and museums. As these tall tales are circulated throughout the years, their embellishments take them further and further from the truth.

In collaboration with The Colonial Williamsburg Foundation, author Mary Miley Theobald has gathered a collection of some of the most frequently repeated myths in American history. Theobald sets the record straight once and for all on these fascinating tidbits that you may have heard before.

Related: The Myth About Carrots and Good Eyesight Came From WWII Propaganda

These 63 myths cover it all, from the beauty practices of women to the construction of early homes to battle legends. For a delightful sneak peek at some of history's most interesting misunderstandings, take a look at the excerpt below.

Read on for an excerpt of Death by Petticoat, then download the book! 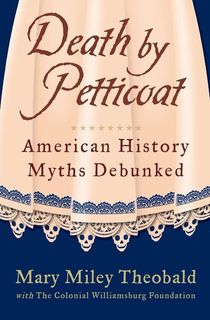 The Dutch bought Manhattan from the Indians for $24 worth of worthless beads.

Only one original piece of evidence tells us anything about the purchase of Manhattan: a letter written in 1626 by merchant Pieter Schagen to the West India Company (the owners of New Netherland, now New York) saying that the settlers “have bought the island of Manhattes from the savages for a value of 60 guilders.” That’s all we know for certain. It doesn’t say which settlers purchased the island, or from whom they purchased it, although it was probably the local Lenape tribe. Typically, the trade goods Indians most desired were things like axes, iron kettles, copper, and wool fabric. No reason beads couldn’t have been included, but nothing tells us exactly what the mix was. North American Indians were notoriously shrewd traders and would not have been fooled by worthless trinkets.

A little more is known about the purchase of Staten Island. That sale was also made for sixty guilders’ worth of goods, and this time we know the Indians got cloth, axes, hoes, awls, kettles, Jew’s harps, and beads. The Manhattan mix was probably similar.

North American Indians and Europeans had very different ideas about land ownership. The Indians regarded land as something you could use but not own or sell, like air or water. Some historians have suggested that the Indians may have thought they were sharing, not selling.

No, but they did something just as bad. For nearly three hundred years, some upper-class European women used a lead-based makeup to lighten their skin.

Related: The History of the Corset, a Garment Fraught with Misconceptions

Unlike the late twentieth century when everyone wanted a “healthy” tan, in earlier centuries people thought pale was prettier. Pale skin was a status symbol. It showed that the person didn’t have to work outside in the fields like a peasant. But there is no evidence that supports the rumor that women ate arsenic to lighten their skin. In fact, arsenic actually darkens the skin, so anyone trying this would have abandoned the effort quickly. Or died.

Starting in the early 1500s, some wealthy European women (think Queen Elizabeth I) used a skin lightener called ceruse. Made with white lead, ceruse was also used in making paint. This caused damage, perhaps death, if the woman applied it often enough. It was still available in France in the middle 1700s. American women of that period also valued pale skin, but they did not typically wear makeup of any kind. There is no evidence that American women applied ceruse to their faces.

It was against the law to teach African-Americans, enslaved or free, to read.

Sometimes true, sometimes not, depending upon where and when.

During the colonial period in Virginia, no laws prohibited teaching slaves to read. In fact, Samuel Davies, a Presbyterian minister, worked hard to bring books and education to Virginia slaves in the mid-1700s. A teacher named Mrs. Wager taught black children—most enslaved, some free—at the Bray School in Williamsburg from 1760 until her death in 1774. Unlike the all-white, all-male College of William and Mary down the street, Mrs. Wager taught boys and girls.

In colonial South Carolina, teaching a slave to write was not illegal until 1740, the year after the Stono Slave Rebellion. Georgia passed a similar law in 1755. Slaves who knew how to read and write could more easily communicate plans for uprisings. But in most colonies, north and south, a slave’s education was left up to the owner.

In the 1800s, most southern states passed laws against teaching African-Americans, slave or free. For example, in 1831, Virginia passed a harsh law that limited the activities of the enslaved population and put education out of reach for most. In 1833, Alabama tried to cover all bases with a law fining anyone who taught a slave or free person of color to spell, read, or write. Before the Civil War, about 10 percent of African-Americans could read; immediately after, the percentage jumped to 30 percent as former slaves rushed to learn.

So, generally speaking, teaching African-Americans was usually legal in southern colonies and states until about 1830. After that, it was usually illegal.