[CLOSED] Discover an Untold Story of the Holocaust

20 winners will receive a copy of 999: The Extraordinary Young Women of the First Jewish Transport to Auschwitz.

NOTE: This giveaway is now closed.

Auschwitz, the largest of the Holocaust's concentration camps, is perhaps one of the most infamous sites in human history. Opened in 1940 as a "reprieve" for overpopulated local prisons, Auschwitz was meant to serve only as a concentration camp—not the grisly extermination center it would soon become. Growing rapidly from one camp (Auschwitz I) to a peak of 40 concentration and extermination camps over the course of World War II, the camp was the destination for 1.3 million political prisoners, Jews, Roma, LGBT people, and other populations considered undesirable by the Nazi state. For approximately 1.1 million of those prisoners, Auschwitz was their final destination.

For the first two years of its existence, Auschwitz remained a prison for primarily Soviet POWs. But in 1942, the first Jewish transport to Auschwitz took place. In 999, Heather Dune Macadam tells the story of the 999 young women who were the first Jewish people transported to the notorious death camp. These Slovakian Jews were not a part of the resistance. They didn't even know they were being sent to a death camp: Instead, they thought that they were reporting for duty for factory work in the midst of WWII.

Filled with detailed research and the memories and testimonies of the few women in this transport who survived Auschwitz, this book sheds new light on one of the most ignominious moments in human history. 999 is necessary reading for any WWII buff—and we're thrilled to be giving away 20 copies to readers of The Archive.

Enter your email address for your chance to win one of 20 copies of 999: The Extraordinary Young Women of the First Jewish Transport to Auschwitz.

By submitting your email address you agree to receive emails from The Archive and Kensington Books. 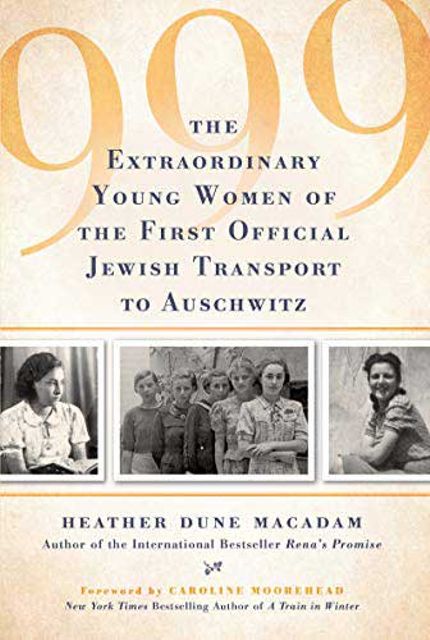 On March 25, 1942, nearly a thousand young, unmarried Jewish women boarded a train in Poprad, Slovakia. Filled with a sense of adventure and national pride, they left their parents' homes wearing their best clothes and confidently waving good-bye. Believing they were going to work in a factory for a few months, they were eager to report for government service. Instead, the young women--many of them teenagers--were sent to Auschwitz. Their government paid 500 Reich Marks (about $200) apiece for the Nazis to take them as slave labor. Of those 999 innocent deportees, only a few would survive.

The facts of the first official Jewish transport to Auschwitz are little known, yet profoundly relevant today. These were not resistance fighters or prisoners of war. There were no men among them. Sent to almost certain death, the young women were powerless and insignificant not only because they were Jewish--but also because they were female. Now acclaimed author Heather Dune Macadam reveals their poignant stories, drawing on extensive interviews with survivors, and consulting with historians, witnesses, and relatives of those first deportees to create an important addition to Holocaust literature and women's history.

Note: The sweepstakes is open to all legal residents of the 50 United States and Washington, DC who are 18 years of age and older by November 8, 2019.