After The Last Dance: Delve into the Definitive MJ Bio

One of sports’ greatest writers took on the G.O.A.T. in Playing for Keeps.

With no baseball season, NBA playoffs cancelled, and no word on when sporting stadiums will reopen, it’s no wonder sports fans have been obsessed with The Last Dance. The ESPN documentary about Michael Jordan’s iconic career has been appointment television every Sunday night for five weeks—but with its final episode airing May 17th, sports fanatics will have to turn to new sources of entertainment.

And there’s plenty more to find within the world of Michael Jordan.

In 2012, Pulitzer Prize winner David Halberstam published his definitive take on MJ. Not only does Playing for Keeps illuminate the personality and drive behind basketball’s biggest superstar, it also shows just how the NBA transformed to allow such superstars to emerge.

Read on for a taste of Halberstam’s insights, then download Playing for Keeps. 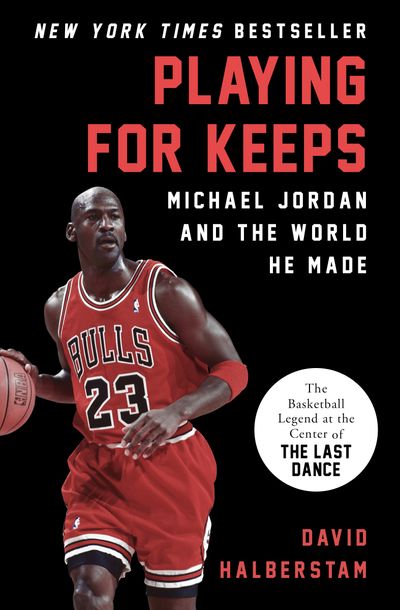 That there had been even one Michael Jordan seemed in retrospect something of a genetic fluke, and the idea that anyone would arrive in so short a span of time and do what he did both on and off the court seemed highly unlikely. For beyond the surpassing quality of his athletic skills, there were other qualities at work as well. He was dazzlingly good-looking, with a smile that seemed to bestow pleasure and comfort on all its recipients, and he inevitably became well aware of the benefits that derived from being that successful in his sport, and that good-looking as well—the uses of both fame and beauty. He was tall, but not too tall—six foot six—with a body that seemed eerily flawless, with wide shoulders, a slim waist, and only 4 percent body fat. (The average professional athlete is closer to 7 or 8 percent fat, and the average American male is somewhere between 15 and 20 percent.) He cared about clothes and wore them extraordinarily well; he was quite possibly the best dressed American male since Cary Grant, though the range of clothes he could look good in was vastly wider. He looked better in sweats, one member of the team that shot his Nike commercials noted, than most movie stars did in black tie. “Make me look good,” Jordan would admonish Jim Riswold, the Portland advertising man who was in charge of the Nike commercials, before each shoot. Riswold once told him, “Michael, I could shoot you pushing little ladies into onrushing cars in the middle of downtown traffic or throwing puppies into boiling water and you’d still look good.”

Related: How Muhammad Ali Became The Greatest: The Rise of a Legend

In the past, America’s ideal of beauty had always been an essentially white one; American males had looked longingly in the mirror hoping to see Cary Grant or Gregory Peck or Robert Redford. Jordan, shaved head and all, had given America nothing less than a new definition of beauty for a new age.

What America and the rest of the world saw now was nothing less than a kind of New World seigneur, a young man whose manner seemed nothing less than princely. He was most assuredly not to the manner born—his paternal grandfather had been a tobacco sharecropper in North Carolina. His parents were simple and hardworking people, the first in their families to enjoy full rights of American citizenship, and they produced a young man who carried himself with remarkable natural grace. Because of the loving way he had been raised and because of the endless series of triumphs he had scored over the years, his personal comfort zone was dauntingly high: he had an inner confidence that was simply unshakable.

His manner with all kinds of people in even the briefest of meetings was usually graceful, particularly for someone subjected to so many pressures, and those upon whom he smiled seemed the grander for it. He had charm, was very much aware of it, and used it skillfully and naturally, rationing it out in just the proper doses, holding it back when it served his purpose. He was easy to like, and people seemed to vie to be liked by him. Veteran sportswriter Mark Heisler once noted in a magazine article that he had never wanted an athlete to like him so much as he did Michael Jordan. A vast variety of magazine editors longed to print articles about him because, as with Princess Diana of England, his photo on their covers greatly increased newsstand sales. All kinds of powerful, rich men competed to be his friend, to drop his name casually, and, of course, to play golf with him.

Because of all this, he had become a great salesman as well as a great basketball player. He sold the game of basketball to millions of people in different lands who had never seen it played before and to millions of others who had never seen it played like this before. He sold Nike sneakers if you wanted to jump high, Big Macs if you were hungry, first Coke and then Gatorade if you were thirsty, Wheaties if you needed an all-American cereal, and Hanes underwear if you needed shorts. He sold sunglasses, men’s cologne, and hot dogs. Mostly he sold himself, and it was, year by year, as championship title was added to championship title, as one last-minute heroic replaced the previous one, an easy sell. There was already a statue commemorating his career outside Chicago’s United Center, where he played, a building he hated but which had been built in no small part to accommodate the greater number of fans who would pay large sums of money to come and watch him. The statue showed him as Jump Man—Michael rising to dunk—but compared to the man it commemorated, it seemed oddly crude and heavy, art not so much imitating life as diminishing it.