We sat down for an interview with the author of The History of the Third Reich in 100 Objects.

Roger Moorhouse is one of the most prominent living historians of Germany during the World War II era—thanks no doubt to his knack for unearthing new details and bringing to light new perspectives about a heavily researched time.

Today marks the release of the paperback of Moorhouse's acclaimed book, The Third Reich in 100 Objects. To mark the occasion, we chatted with Moorhouse via email about the surprises held by these objects, even for a historian of the Third Reich, the value of object history, and how societies are revealed by the items they hold dear.

Dive into the history of Nazi Germany. 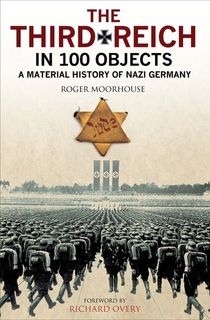 How did you come to write a history of objects?

The format of “A History in 100 Objects” had been used before, of course, so I shamelessly borrowed it to apply to my own subject: the history of Nazi Germany. I had honestly imagined that this would be quite an easy and quick book to write, but the more I got into it, the more I realized that it was actually rather profound. And the result, I think, is fascinating. The approach—through the objects—allows the reader to take a thoroughly new perspective on a relatively well-known subject. It’s a great book!

How do you think objects are uniquely positioned to elucidate the culture and history behind their making?

It’s a good question. We generally don’t examine modern history through that material lens – through the objects that the history left behind. But, of course, we do it routinely in prehistory and archaeology, mainly because the material history is all we have. So, by applying this approach to modern history we arrive at something rather fascinating, namely a material history of a modern subject.

I think in this respect, the approach allows us to go to places and examine themes that don’t usually get much attention in the history of Nazi Germany, such as social history, the status of children, the role of women and so on. Of course, all the usual stuff – tanks, weapons and technology – are all there too! But I think this approach allows us to be broader and more comprehensive in our analysis. It allows us to ask questions that popular history doesn’t usually ask.

You’re obviously an expert in Germany in the WWII era—was there an object that revealed something new and particularly insightful to even such a seasoned historian as yourself?

Not really a single item, but rather a combination of items, and it is those that reflect the social history of the Third Reich. This is an aspect that I’ve been fascinated with for many years, ever since reading Richard Grunberger’s brilliant book on it a long time ago, and it is a part of the history that I don’t think gets enough attention.

Related: The Courageous Acts of Resistance That Led to the Warsaw Ghetto Uprising

When we study Nazi Germany, we focus our attention primarily (and rightly) on the genocide against the Jews, but I think we ignore the social history at our peril because it helps us to explain how this all happened; how the German people came to support Hitler, how they were seduced, and how they came to be complicit in the horrors of the Holocaust.

So, for me, that aspect – the social history – is very instructive and enlightening, and it is represented in the book by a number of items – from the toy figures that German children played with, to the collection tins for the Winter Relief programme, and the mementos from a cruise on the Nazi liner “Wilhelm Gustloff” – which demonstrate how the German people were led astray by Nazism.

Was there an object you felt strongly about that didn’t make the cut?

Not really. I started with a wish list, which combined items that I already wanted to include as well as concepts that I wanted to illustrate through a suitable item. Then I worked it all out from there, and there weren’t many difficult decisions to make, to be honest, remarkably the book fell into place quite easily. Of course there are some items that are difficult to illustrate with an item, but therein lies the challenge. All in all, it was a very enjoyable book to write.

What unassuming object do you think a future historian may use to illuminate the current period?

Ha! Good question! Well, for today—in the midst of the Coronavirus crisis—it would have to be the humble face mask I suppose, which seems to be so symbolic of this curious episode that we are all living through.

More generally, I think the 21st century this far has been one of division and polarization, fueled in part by the deafening white noise of social media, so it is an age that I personally regard as the “Age of Hysteria”. Consequently, I think an item that would adequately illustrate that hysterical aspect of our lives would probably be the exclamation mark…. !

All photos courtesy of Greenhill Books