The Renaissance painter was a virtuosic man whose wisdom was not limited by subject matter.

Leonardo da Vinci’s 568th birthday is on April 15th, and we’re celebrating by taking a look at all of his incredible contributions. The Renaissance painter is considered one of the most talented artists of all time, though just over a dozen of his paintings have survived the test of time. Though he’s best known for the Mona Lisa or The Last Supper, da Vinci was far more than just a remarkable painter. He also made a name for himself through sculpting, drawing, and inventing, as well as in the fields of architecture, science, math, literature, music, and cartography.

Related: The Archive Recommends: 10 History Books Our Readers Love the Most

Da Vinci was a self-taught man who grew to become our very definition of the term “Renaissance Man”. He had a vast array of interests, which he excelled in to attain incredible feats. Among these broad skills was a knack for technological ingenuity. Da Vinci’s sharp and imaginative mind led him to conceptualize such contraptions as a flying machine, an armored fighting vehicle, concentrated solar power, an adding machine, and the double hull.

While many of his more grandiose inventions weren’t put into production due to the limitations of engineering and metallurgy of the time, some of his smaller works were crafted. He’s responsible for useful inventions such as the automated bobbin winder and sometimes credited with advancements like the parachute and the helicopter.

Another one of da Vinci’s passions was anatomy, and due to his advanced drawing skills, the artist seemed to have a keen eye for topographic anatomy. He sketched masterful studies of human musculature, tendons, and other visible outward features. But as da Vinci’s studies progressed, he began to dissect human corpses. This led to his drawings of the skeletal structure, sex organs, vascular system, and one of the very first depictions of a fetus in utero.

Da Vinci’s observations tracked the effects of age on the body, as well as the mechanics of movement. He also tried to pinpoint the source of emotion within humans. Da Vinci even branched out into the study of animal physiology, such as birds, monkeys, and horses.

Throughout da Vinci’s many coded journals and notes, readers will discover a wealth of meaningful observations of the world. From invented fables to philosophical musings, he never stopped reflecting upon life and its many nuances.

WithThe Wisdom of Leonardo da Vinci, you'll access a collection of journal entries from da Vinci himself. This compilation gives readers a look directly into the genius’s mind, from his cultivated philosophy to his vivid imagination and through his scientific explorations. In the excerpt below, da Vinci outlines a series of “riddles in the form of prophecies.”

Read an excerpt from The Wisdom of Leonardo da Vinci below, then download the book. 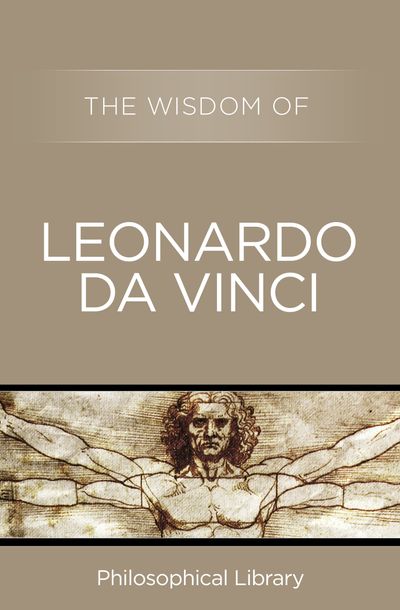 Riddles in the Form of Prophecies

Happy are those who heed the words of the dead.
Read good works and be guided by them. (I. 64 r.)

Money and gold.—There will issue from cavernous caves something which will make all the people of the earth toil and sweat and suffer great sorrow, anxiety, and travail in order to have its aid. (C. A. 145 r.)

Metals.—There will issue from dark, gloomy caves something which will bring great sorrow, danger, and death on the whole human race; to many of those who seek it, it will after much suffering bring delight; but those who do not share in it will die in want and in distress. It will engender unending treason; it will drive unhappy men to commit more murders, thefts, and acts of oppression; it will breed suspicion among those who seek it; it will destroy the freedom of free cities; it will take the lives of many; it will sow among men much fraud, deceit, and treason. O monstrous creature, it would be better for men if you returned to hell! On account of you great forests are robbed of their trees and countless animals are robbed of their lives. (C. A. 370 v.)

Man’s cruelty.—There will be seen on the earth animals which constantly fight among themselves, inflicting great harm and frequently death on each other. Their enmity will know no bounds; their savage members will fell a great part of the trees in the vast forests of the world; and after they gorge themselves, they will continue to feed on their desire to inflict death and suffering and sorrow and fear and flight on all living creatures. Through their measureless pride they will seek to raise themselves to heaven, but the excessive weight of their members will hold them fast to the earth. Nothing will remain on the earth or under the earth and water that is not pursued, chased down, or destroyed; and it will be chased from country to country. Their bodies will be the grave and passageway of all the living bodies which they have killed.

O world, why do you not open and hurl into the deep clefts of your abysses and caverns and no longer show to heaven such cruel and heartless monsters? (C. A. 370 v.)

Fear of poverty.—Wickedness and fright cause many men to be so terrified that they will waste their prodigious strength in running like lunatics in the belief that they are escaping. (C. A. 37 v.)

Misers.—Many are those who will follow zealously, diligently, and rashly the thing that has always frightened them and never recognize its malignancy. (C. A. 370 r.)

Men will pursue the thing that they fear most: they will live miserably to avoid being plunged into misery. (I. 64 v.)

Men as they get older become more miserly, whereas they ought to become more generous since their days are numbered. The very ones who are thought to have most experience and judgment seek after things and hoard them most avidly when they have least need of them. (C. A. 370 r.)

Dowries.—Whereas once young girls could defend themselves against lust and rape neither through the watchfulness of relatives nor through the thickness of walls, there will come a time when the fathers and relatives of these girls will be forced to pay a high price to those who wish to sleep with them, even if the girls are rich, noble, and very beautiful. It will seem as though nature should extinguish the human race, for it will be useless to the world and will bring destruction to all created things. (C. A. 370 v.)

Related: Beyond the Podcast: 10 Great Courses for Every History Buff

Churches and monasteries.— Many there will be who leave behind the work and sorrow and poverty of life and worldly goods and will go to dwell in rich, stately buildings, alleging that this is the means of becoming the friend of God. (C. A. 370 v.)

Sale of Paradise.—Numberless throngs will sell publicly and undisturbed things of the highest worth without the consent of the owner; things which were never theirs nor in their power, and human justice will not intervene. (C. A. 370 v.)

Monks and saints.—Those who have been dead for a thousand years will support many of the living. (I. 66 v.)

Asses.—Constant toil will be repaid with hunger, thirst, suffering, lashings, and pricks. (C. A. 370 r.)

O careless Nature, why are you so unfair toward your children, showing yourself to some as a loving, devoted mother and to others as a most cruel and heartless stepmother? I see your children given over in slavery to others with no sign of sympathy; and instead of repayment for services rendered, I see them repaid with the worst possible torment. Always they devote their lives to the welfare of their malefactor. (C. A. 145 v.)

This post is sponsored by Open Road Integrated Media. Thank you for supporting our partners, who make it possible for The Archive to continue publishing the history stories you love.

Featured photo of "The Vitruvian Man" via Wikimedia Commons