An Interview with Leigh Russell, Author of Abigail of Venice

We discuss what it's like to write historical fiction, her interest in medieval Europe, and more.

Leigh Russell is the author of the international bestselling Geraldine Steel series, the Ian Peterson psychological crime thrillers, and the Lucy Hall mystery series. Having sold over a million crime novels, she’s recently turned her attention to a new genre: historical fiction.

Russell’s new novel, Abigail of Venice, comes out on October 18, 2021. Its protagonist, the titular Abigail, is a Jewish woman who flees the violence and religious persecution rampant in 16th-century Lithuania. She resettles in Venice, where she hopes to start anew. But someone from her past reappears, threatening to tear down the life that Abigail has rebuilt. 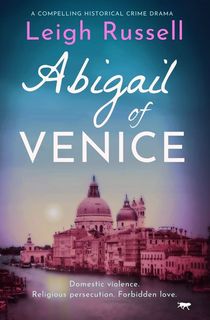 Recently, The Archive had a chance to interview Russell about the release of her new book and more. Read our interview below, in which she unpacks various historical and literary insights.

Abigail of Venice is set in 16th-century Lithuania and Venice. Can you tell us more about how you became interested in these settings, and why you ultimately used them as the backdrop for your novel?

The history of the Jewish people is one of persecution and survival against the odds, which in some ways seems to encapsulate the essence of human experience on so many levels. One day I visited Venice and a story occurred to me, unfolding against the backdrop of the Renaissance with the rise of the great publishing houses, and the horrors of the Inquisition. It was altogether too powerful a story to forget, and so my protagonist set out on her journey to escape personal and public persecution.

Related: These Fascinating Jewish History Books Illuminate the Path of the People

You’ve written numerous crime fiction books, thrillers, and a dystopian novel, but this is your first historical fiction novel. Have you always wanted to explore a historical setting? What inspired you to take the plunge into a different genre?

This is my first historical novel but, although I’ve made my name as a crime writer, I’ve never seen myself as exclusively writing crime. Writing fiction is a creative process, and I find it exciting to challenge my creativity in different directions. I have never stopped writing crime, but I like to explore other kinds of writing as well. My inspiration for this historical novel came from discovering that sacred Jewish books were burned by the Inquisition, an atrocity set against the backdrop of the rise in printing, with its implications for universal literacy. The juxtaposition of those two events struck me as not only dramatic, in terms of a story, but also hugely significant in their reflection of man’s potential for both enlightenment and for religious suppression. Printing offers a path to universal education, but it can also be subverted into a tool for propaganda and religious control. It unleashed an unprecedented power that was not always used with morally justifiable intentions.

I imagine it can be challenging to write about a time and place largely unfamiliar to readers. How did you go about getting into the heads of characters whose everyday lives differ in so many ways from our own?

It was certainly a challenge to write about the world from the perspective of a woman living nearly five hundred years ago. But writing from a character’s point of view, walking around inside their skin and seeing the world through their eyes, is a challenge that fiction writers face every day. My protagonist in Abigail of Venice is a courageous individual who calmly accepts adversity as her divinely appointed lot, and recognises the existence of evil spirits as part of the world she inhabits. Yet she loves and fears and hopes just as we do today. So while, in some ways, the differences between us are challenging to imagine, I like to think our shared humanity reaches out across the centuries.

On the other hand, although it takes place centuries ago, Abigail of Venice tackles topics that are still relevant today, such as antisemitism, migration, and abusive relationships. Do you think the parallels to the modern day made it easier to approach these hot-button issues for your novel, or was it difficult to think about them in a historical framework?

Sadly abuse and cruelty in personal and social arenas remain as relevant today as they were in the sixteenth century. Persecution and abusive behaviour continue throughout the world, and the issues remain as disturbing and vicious as ever. Although in some ways life has changed a lot over the course of the past few hundred years, cruelty and exploitation have not gone away. Like most historical fiction, in examining human behaviour in the past, my novel explores people’s behaviour today, through the lens of history.

Our readers love all things history. I’m sure they’d love to know: when you were doing background research for your novel, was there anything particularly surprising, fascinating, or little-known about this time period that you came across?

I spent three years researching the mid-sixteenth century, which is a fascinating period. One of many revelations was to see how little life has changed since the 1560s. Several of the historical figures I read about were surprisingly modern in their outlook, like the Venetian poet and courtesan, Veronica Franco, who argued that women were the equals of men. All that held women back, she wrote, was that ‘Women have not yet realised this.’ It was also a surprise to learn that there was a credible attempt to establish a Jewish state in the 1530s, an endeavour that might have succeeded had war not broken out between Muslims and the Catholic Church. So many of our ideas today are not as new as we think. I wonder how the course of history would have been affected by the founding of a Jewish state in the Middle East almost five centuries ago.

Everything is somehow connected, and yet there remains a fundamental disconnect between man’s actions and our potential to create peace in our world. This is one of the saddest lessons history teaches us. I hope studying and reflecting on history may help us to find a way forward and bring about an end to all the needless conflict and suffering.