He spent years with an up-close look at what it's like to rule Britain—and now the responsibility rests on his shoulders.

The British royal family has been a source of interest—and scandal—for centuries. Whether it be politics and tradition or romance and tragedy, they have caused ripples on all sides of the pond. Who could resist the pull of the beautiful political crusader Diana? Who across the world didn't know about the long, enduring legacy of Queen Elizabeth II?

And what of Charles III, the longest heir apparent in history, and the United Kingdom's newest king? While the media never considered him to be a figure as beloved or intriguing as the women mentioned above, he is still a fascinating royal. Published in 2019, Robert Jobson's King Charles pieces together a vivid biography of the man at the forefront of Britain's future.

Through exclusive interviews and thorough research, this biography sheds the myths and misconceptions surrounding the king. This book covers it all, from the lead-up to his ascent to the throne to the intricacies of his political beliefs.

Read on for an excerpt of King Charles, then download the book! 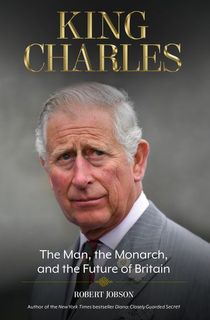 Head bowed, His Royal Highness Prince Charles, the Prince of Wales, heir apparent to the British throne, Field Marshal in the British Army, Admiral of the Fleet of the Royal Navy and Marshal of the Royal Air Force, stood bolt upright. His job that cold November morning was simple enough: to lay a wreath, or in his case two. Pristine as always, he was wearing his ceremonial uniform of an RAF Air Marshal with his large medals pinned to his chest, but hidden under his heavy blue-gray greatcoat. He had performed this solemn duty many times before, but today was special.

Right on cue, the heir to the throne would lead the nation in commemorating the war dead on Remembrance Sunday. This time it fell to him, not his mother, Elizabeth II, to lay the first wreath—the nation’s wreath—of red poppies at the foot of the Cenotaph memorial in Whitehall. This time, the Sovereign, the once ever-present Queen, would not be on duty or the star performer, but he would be. The man who will be king and commander-in-chief of the UK’s armed forces then snapped a salute to the fallen. As ever, he had performed his duties with aplomb but, unequivocally, this was a watershed moment in his developing royal journey.

A few minutes earlier he had led out seven members of the royal family all bedecked in military uniform. His sons, William and Harry; his siblings, Anne, Andrew, and Edward; and his mother’s first cousin and grandson of King and Emperor George V, the Duke of Kent, dutifully followed him and then stood in silence. Charles, in front of them, waited patiently for his signal to perform. The unmistakable chimes of Parliament’s Big Ben and a gun salute marked the beginning of the two-minute silence. Another gun salute, followed by the Reveille played immaculately by nine white-gloved buglers of the Royal Marines’ Portsmouth Band, bedecked in Number 1 Full Dress of full-length, dark-blue greatcoats with the white Wolseley-pattern helmets, signaled that the impeccably observed silent tribute was at an end.

Queen Elizabeth II’s equerry, Major Nana Kofi Twumasi-Ankrah of the Blues and Royals, stepped forward with the Sovereign’s wreath and handed it to Charles. He held it firmly in his right hand and then, with his left hand holding the hilt of his sword, walked forward and placed it in pride of place at the foot of the Cenotaph before walking backwards whence he had come.

It was November 12, 2017—the day after Armistice Day and just two days shy of Charles’s sixty-ninth birthday and the start of his milestone seventieth year.

Without doubt it was going to be a momentous twelve months for the man who is now the longest-serving heir to the throne in the British monarchy’s history. Less than three hundred fifty feet away on a Whitehall balcony, the Queen, wearing a spray of poppies held in place by Queen Mary’s gleaming Dorset bow brooch, keenly observed proceedings, watching her eldest son’s every move with a sharp eye. Alongside her, in his uniform as Lord High Admiral, was World War II veteran Prince Philip, then ninety-six, protected from the autumn chill by his heavy Royal Navy winter greatcoat. Next to the royal couple stood Prince Charles’s second wife, all in black, the seventy-year-old Duchess of Cornwall.

From her vantage point the Queen surveyed the solemn scene: the one time of the calendar when all the royal family, all the party leaders, all former prime ministers and representatives of every Commonwealth nation gather in London. Although on six previous occasions she had been absent from the parade in her sixty-five years on the throne (during her pregnancies with Prince Andrew in 1959 and Prince Edward in 1963, and on four other occasions when she was on overseas visits in 1961 in Ghana, in 1968 in Brazil, in 1983 in Kenya, and in 1999 in South Africa), 2017 was much more significant. After all, she had always been center stage, not an observer, as in this case.

It was also a definite move to authorize her heir to carry out the job and it was certainly not a decision taken lightly. As she watched on, some reporters insisted they had seen the Queen wipe away a tear, but it seemed unlikely from such a stoic character and was more likely the effects of a bracing northwesterly wind in a November cold snap that chilly morning.

Behind the Crown: 15 First-Class Books About Royalty

In the months leading up to this symbolic moment the Prince of Wales had slowly but surely been taking on a number of the Queen’s more physically taxing engagements at her request. In 2017 the prince totaled 374 UK engagements and 172 abroad, making him the busiest member of the royal family with a grand total of 546 engagements. He did the most traveling, too. In 2018 Charles again topped the royal rankings for the total number of engagements ahead of his sister, Princess Anne. He was the only member of the family to complete more than 500 engagements, although he was slightly down on the previous year. He visited ten foreign nations on official business, eclipsed only by his sons William and Harry, who both visited eleven countries abroad. For the prince, in the coming years it was going to get busier as more and more he did the heavy lifting for the aging Sovereign. As ever, he carried out his duties with the minimum of fuss. It was, as he saw it, his duty to do so as her “liege man,” as he had sworn to be before four thousand guests inside the medieval walls of Caernarfon Castle at his investiture as Prince of Wales in 1969. Back then he had received the insignia as the twenty-first Prince of Wales and, along with it, the right to use the heraldic badge of the title that bears motto, “Ich Dien”—“I Serve” in German—on the ribbon below the coronet and his feathers.

This engagement at the Cenotaph was perhaps the most “kingly,” perhaps, too, the most piquant. It was visually regal without doubt. Charles was surrounded by the political, military, and religious establishment and with millions watching the broadcast live on BBC television around the country. What unfolded was an unmistakably historic image, the clearest visual sign to date that the British monarchy was undergoing a seamless transition from its aging monarch to her eldest son. It is also an emphatic nod to the future, with the ancient institution’s dutiful steward ensuring continuity at the end of her record-breaking long reign.

Prince Charles will, in this interim period before his ascension to the throne, enjoy playing a dual role, standing in and covering for the monarch where necessary, as well as fulfilling his own public obligations. Charles taking the lead role in this ceremony, which he did again in 2018, is expected to continue this year (2019) and to become the norm over the coming years, too. This dual role was perhaps shown most visibly on this day when he became the first person to lay two wreaths in a single Remembrance Sunday service. As soon as the Duke of Edinburgh’s equerry, Captain Ben Tracey of the Grenadier Guards, had laid the duke’s wreath on his behalf, Charles was tasked with returning to the foot of the Cenotaph to pay tribute all over again, this time placing his own wreath of his unmistakable Prince of Wales feathers next to his father’s wreath.

Then followed the Duke of Cambridge, Prince Harry, turning up to the service sporting a beard amid false claims that he had broken military rules, his critics forgetting he was exempt as he left active service in 2015; and the Duke of York, who had also served in combat in the Falklands conflict. Then came the last of the royals, the Earl of Wessex, the Princess Royal, and the Duke of Kent, at eighty-two the only royal on parade of the World War II generation. Prince Philip appeared to be propping himself up as he stood on the balcony, while at other points he seemed to be leaning on a wall to support himself. The Queen appeared to suggest Philip sit back down again during the service. He ignored her. Following the playing of the national anthem, the Queen, perhaps for her husband’s sake, moved swiftly inside to the warmth of the Foreign Office; the duke, clearly feeling the effects of the cold, puffed out his cheeks, perhaps in relief that this public duty was all over. Ever the gentlemen, however, he insisted that his daughter-in-law, the Duchess of Cornwall, go inside first before following on.

The other VIPs withdrew, clearing the path for the Royal British Legion parade. More than 10,000 people from over 260 organizations proudly marched by the memorial. Several old comrades had elected to be wheeled around the same route. Victoria Cross recipient, Grenadian-born Lance Sergeant Johnson Beharry of the 1st Battalion, Princess of Wales’s Royal Regiment, was there, too. The thirty-eight-year-old had been awarded the highest honor for gallantry in 2005 after his incredible heroism helping save the lives of his colleagues on two separate occasions while driving an armored vehicle under heavy enemy fire in the Iraq War in 2004. On this, he elected to parade with Chelsea Pensioners, pushing one old solider in his wheelchair. Charles’s sovereign moment was over in a matter of minutes. He had, as ever, performed his duty with equanimity.

Announcing the decision to entrust the job to Prince Charles a few weeks earlier, Buckingham Palace had said the reason was that the Queen wished to be by her husband’s side on the balcony and had asked her heir to lay a wreath instead. (The Queen does not suffer from bathophobia, but she had privately expressed concern about walking backwards and going up and down steep stairs, and this engagement involved both.) Make no mistake, however, that what we have been witnessing in Charles’s seventieth year is a gradual transfer of monarchical responsibility from the reigning queen to the heir apparent.