The Dawn's Early Light: Francis Scott Key and the Birth of “The Star-Spangled Banner”

As the Battle of Baltimore drew to a close, an American flag was raised—and the national anthem was born.

“The Star-Spangled Banner” is known from sea to shining sea, but few know the circumstances under which Francis Scott Key wrote America’s national anthem. Oddly enough, it was penned just after the short but bloody Battle of Baltimore.

In September of 1814—two years into the war between the U.K. and the U.S.—the British navy turned its attention towards Baltimore, Maryland. As a busy port, the city would either prove a devastating American loss, or a crucial victory if they managed to thwart the attack on Baltimore Harbor’s Fort McHenry.

Want more books on American history? Sign up for The Archive's newsletter, and get book recommendations delivered straight to your inbox.

As 5,000 British troops marched towards Fort McHenry, they encountered an unexpected setback at the Battle of North Point. There, American troops were lying in wait, prepared to stall the British until Baltimore's defenses could be finalized. When they were satisfied with their delay, the Americans retreated, then awaited the main attack from within the city.

At dawn the very next day, approximately 4,300 British troops began to advance, forcing the U.S. troops to fall back. Still, the battle wasn't easy for the British: They were startled to find that the Americans had 100 cannons and over 10,000 troops. Not long after they breached Balitmore's inner defenses, the British soldiers fled to their ships, wanting to regroup for a less frontal attack.

Meanwhile, at Fort McHenry, 1,000 U.S. troops awaited the British navy, who arrived in a rain of rockets and mortar shells. Harsh fire ensued for 27 hours, though this did not deter the Americans' from their daily reveille: As the fighting drew to a close on the morning of September 14, an oversized American flag—made by a local woman and her 13-year-old daughter—was raised over Fort McHenry. In response to this sign of American strength, an encampment of British soldiers fired a final taunting round at the sky. With that, the Battle of Baltimore was officially over.

But prior to this, Francis Scott Key stood aboard the British ship HMS Tonnant, negotiating the release of Maryland resident Dr. William Beanes. Having succeeded in his mission, Key and the newly-freed Beanes watched the battle unfold from their enemy's decks. At the sight of the raised American flag, Key was struck by a burst of poetic inspiration. He quickly scribbled a series of verses on a scrap of paper, not knowing these words would become an enduring symbol of American patriotism.

Originally titled “Defence on Fort M'Henry”—and then renamed “The Star-Spangled Banner” shortly thereafter—the poem became a sensation after its publication in the Baltimore American. Over 100 years later, Congress made it the national anthem of the United States.

But what exactly was going through Key’s mind as he jotted down the lyrics to the song of our country? In The Dawn’s Early Light, historian Walter Lord describes the Battle of Baltimore in vivid detail, providing intimate insight into the birth of the “Star-Spangled Banner” and the man who wrote it. 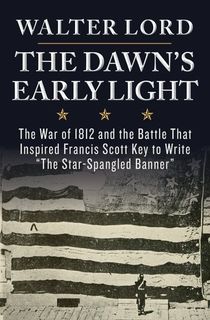