David McCullough died on August 7, 2022, at the age of 89. The author of 13 books and the recipient of two Pulitzer Prizes, two National Book Awards, and the Presidential Medal of Freedom, McCullough was known both figuratively and literally as the voice of American history—he narrated many of Ken Burns’s documentaries, including The Civil War and Brooklyn Bridge, as well as the hugely popular film Seabiscuit.

McCullough didn’t set out to become one of America’s greatest popular historians. After graduating from Yale University with a degree in English literature, he moved to New York to take a job at Sports Illustrated. But a chance encounter with photographs from the devastating Johnstown Flood set him in search of more information about the disaster, and he quickly realized that he’d found his calling.

From the construction of the Panama Canal, to Harry Truman’s unlikely journey from bankrupt haberdasher to the most powerful executive in the world, to the pivotal military campaigns that turned the tide of the American Revolution in 1776, McCullough specialized in telling the dramatic stories of ordinary people in extraordinary times. In honor of the remarkable legacy that he leaves behind, we’re breaking down the six essential David McCullough books that everyone—whether you’re a dedicated student of history or simply a lover of great storytelling—needs to read.

After seeing images of the Johnstown Flood in the Library of Congress, Pittsburgh native McCullough wanted to know more about the disaster that killed more than 2,000 Pennsylvanians. He was disappointed in the two available books on the subject—so he wrote his own.

Interviewing survivors and carefully researching the historical records, McCullough discovered that the flood, which completely destroyed four square miles of the bustling coal-and-steel town, was not a natural disaster but the result of human malfeasance. A dam owned by the South Fork Fishing and Hunting Club, whose members included Gilded Age tycoons Andrew Carnegie and Henry Clay Frick, had been neglected for years; when it finally gave way, a 40-foot wall of water went tumbling down the mountain at 40 miles per hour. No one associated with the club was ever brought to justice, making the tragedy a stern reminder that, in McCullough’s words, “it’s dangerous—perhaps even perilous—to assume that because people are in positions of responsibility they are therefore behaving responsibly.” 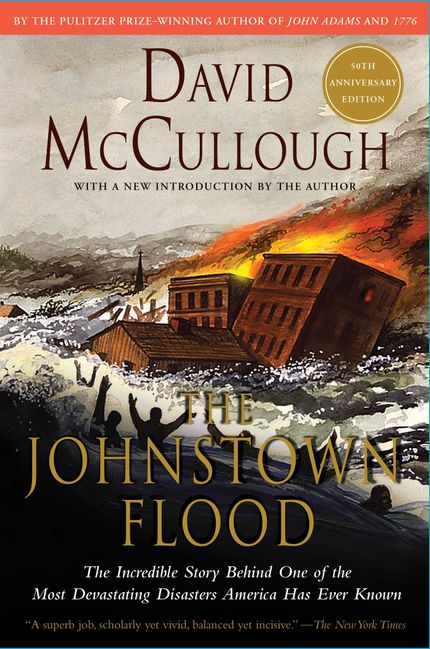 The Path Between the Seas

A testament to the power of the human spirit and the genius of engineers, this National Book Award winner begins in the 1870s, when a U.S. government survey determined that geographical obstacles made a canal connecting the Atlantic and Pacific Oceans across the Isthmus of Panama (then a province of Colombia) impossible. Ferdinand de Lesseps, developer of the Suez Canal, took on the challenge for the glory of France, but met with catastrophic failure.

The project lay dormant until Teddy Roosevelt made it a top priority of his presidency. When the Colombian Senate proved uncooperative, he aided a Panamanian coup d’etat and promptly came to terms with the country’s new leaders. Then came the hard part—removing millions of tons of soil, managing outbreaks of malaria and yellow fever, and designing the world’s largest lock system to raise and lower ships. McCullough celebrates the canal as one of mankind’s greatest achievements, but never loses sight of its staggering human cost—roughly 25,000 people, most of them poor West Indian laborers, sacrificed their lives for the project. 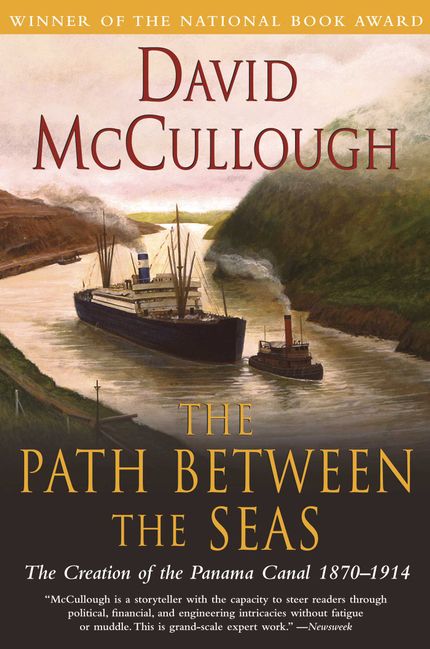 In researching The Path Between the Seas and its predecessor, The Great Bridge, McCullough became fascinated by the president whose bullish, indefatigable spirit seemed so in tune with the times. How did the frail, asthmatic middle child of one of New York’s most venerable families become the brash Rough Rider who dominated American politics at the turn of the century?

McCullough found his answers in the fascinating internal dynamics of the Roosevelt clan—from the children’s veneration of their “godlike” father Theodore, Sr., to the flamboyant eccentricities of their Southern belle mother Martha, to the steadfast resolve of the eldest daughter Anna. McCullough’s second National Book Award winner, Mornings on Horseback follows the Roosevelt clan from their European Grand Tour in 1869 to 1886, when 28-year-old Teddy returned from a self-imposed Western exile after his first wife’s death and entered the New York mayoral race. 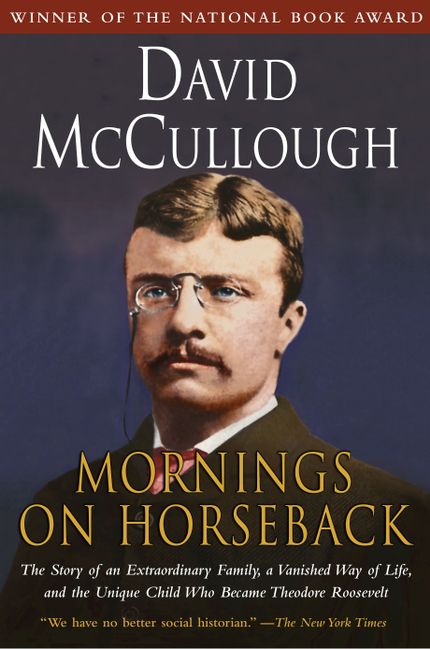 Looking for biographies? Sign up for The Archive's newsletter, and get thrilling life stories delivered straight to your inbox.

Harry Truman didn’t really want to be vice president, let alone president. Yet the sudden death of Franklin Roosevelt in the first year of his third term left the small-town Midwesterner little choice. Despite his reluctance and lack of preparation, Truman steered the nation through some of its most treacherous years. He brought WWII to a close, oversaw the creation of the Marshall Plan and NATO, supported civil rights despite his sentimental sympathies for the Confederacy, and forcefully defended South Korea without getting drawn into a direct war with China and the Soviet Union. He also ran a brilliant campaign in 1948 and won re-election when no one expected him to.

McCullough spent ten years researching and writing his first full-scale biography, even going so far as to adopt his subject’s morning routine in order to better understand him. Truman won the Pulitzer Prize and remains the definitive biography of an “ordinary” man whose humbleness, honesty, and generosity made him an extraordinary leader. 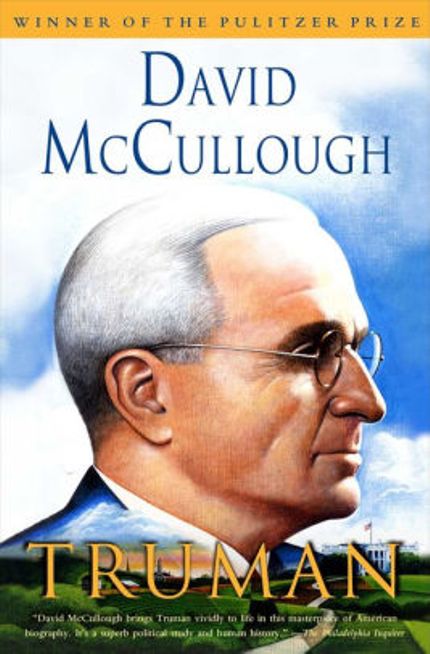 McCullough originally intended to write a dual biography of John Adams and his friend, rival, and White House successor, Thomas Jefferson, but was drawn to Adams’s vibrant, often contradictory, personality. The second US President was a committed realist with an often cynical view of human nature—yet was so free with his emotions that his letters to his beloved wife and political confidante Abigail are enough to make the reader blush. He possessed a deep, far-ranging intellect and was one of the best-read men in America—yet was never happier than when he was performing simple farm chores.

In McCullough’s pages, Adams steps out of Jefferson’s shadow and takes his rightful place as the Founding Father without whose steady hand and amazing prescience the American Experiment might have failed. Winner of the Pulitzer Prize, John Adams was the basis for the HBO miniseries of the same name starring Paul Giamatti.

Related: 14 Fascinating Books About the Founding Fathers of America 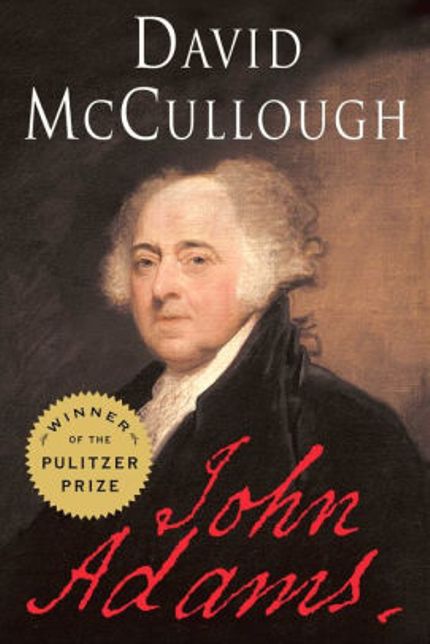 How did two Ohio brothers who never went to college, never trained in physics or engineering, and received virtually no financial support, take flight in the world’s first airplane, succeeding where countless others had failed? McCullough’s slim, compulsively readable book answers that question without diminishing the miraculous nature of the Wright Brothers’ achievement.

To the residents of North Carolina’s Outer Banks, where Wilbur and Orville tested their prototypes and studied the flight mechanics of seabirds, the brothers were “just a pair of poor nuts.” But McCullough reveals how their discipline, ingenuity, and single-mindedness (neither brother ever married and the most important woman in their lives was their younger sister, Katherine) were essential to their breakthrough on a Kitty Hawk beach in 1903. In his dramatic telling, these self-taught tinkerers emerge as two of the greatest pioneers in American history. 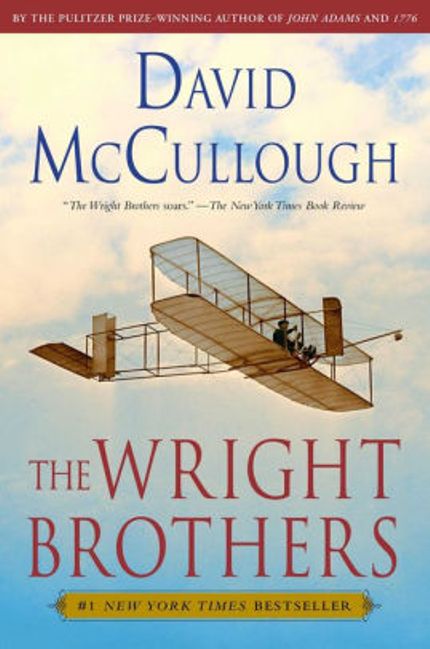