Most of us ask our best friends to be our maids of honor, our road trip companions, or double date partners. That was never the case for longtime buddies Christopher John Boyce (above left) and Andrew Daulton Lee (above right), whose friendship began in high school and would eventually take them to federal prison cells. While the pair did their fair share of partying—booze and drugs were part of the routine—they were also American traitors, and allied with the country’s Cold War enemies: the Soviet Union. Their outrageous adventure is chronicled in the national bestseller, The Falcon and the Snowman—a book that eventually inspired the 1985 hit film of the same name.

After his father got him a gig with the CIA, Boyce’s sky-high IQ earned him top security clearance for the “Black Vault,” a heavily guarded complex within the CIA compound. It was through this room that government secrets, gathered by U.S. satellites, passed—and landed right in Boyce's hands. The farthest thing from an American patriot, Chris wanted to sell the intelligence to the Russian Embassy. All he needed was his drug-dealing sidekick, Lee, to put him in touch with the right people.

Related: One Of The First Two Female FBI Agents Got Her Start In The Marines

What would follow is the stuff of a le Carré thriller—complete with code names and Bond-like spy gadgets—as the two best friends became Russian spies and American turncoats. Robert Lindsey details the Boyce and Lee's traitorous acts in his book, The Falcon and the Snowman.

Read on for an excerpt from The Falcon and the Snowman, and then download the book. 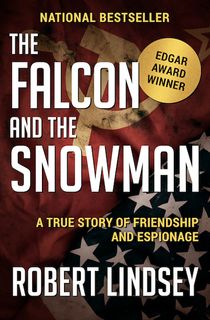 Honoring his multiple pledges of secrecy, Chris at first did not mention to friends his new job in the vault. But after a while, as the weekly round of drug parties went on as usual, Chris began to drop hints to Daulton about it. At first, he said that he had a new assignment he couldn’t discuss; then one night he casually mentioned to Daulton that he’d been to the local headquarters in the basement of the Tishman Building near International Airport that day, but said slyly he couldn’t say anything more about it. After Chris rented a small cottage not far from the TRW plant, he tantalized his friend with another hint: TRW, he said, had made him get a telephone because he had a new job that gave him more responsibility. Daulton, ever curious, pressed his friend to explain what was going on. All he got was knowing smiles and once an enigmatic reply: “I’m working with birds.”

By the beginning of 1975 there was no doubt where Daulton was in life: he was fully submerged in the drug culture and hypnotized by its easy life. Chris, on the other hand, was trying to inhabit two universes. By day he played his role in the high-stakes game of espionage-from-space. By night he rejoined the bored youths of Palos Verdes and Daulton’s loutish cadre of jobless drug cronies from the beach cities north of The Hill, partying and getting high. Ostensibly, the two friends were as different as the sun and the moon. Chris was intense, hardworking, an introspective young man who his parents said was going to become a lawyer: Daulton was by now the self-styled racketeer, with long unkempt hair and a scruffy goatee, who sometimes carried a gun, talked in a swagger and gave away drugs to addict the unaddicted.

One Saturday night in January, there was another party at Daulton’s home. As usual, beer, pot and cocaine were supplied by the generous host.

After midnight, everybody had left except Chris. He and Daulton were complaining about the world they had inherited—about Watergate, Vietnam, air pollution, corruption in big business and government, and other assorted perceived evils. Daulton saw in these evils a larger force that was the source of his own problems. Political crooks like Nixon were beating the law, but not he, even though selling drugs was a victimless crime that filled a legitimate public need. “It’s a hell of a lot better than people who go on welfare,” he declared smugly. He complained again how the courts were hassling him, trying to send him back to jail for a victimless crime. But, he told Chris emphatically, he wasn’t going back.

The conversation turned to Chris’s job, and for the first time, details about life in the Black Vault came out: Chris told his friend what he did in the vault, about the CIA’s satellites and how they spied from space with eyes so fantastic they could isolate a single man on a desert. Outrage at what he regarded as a mindless arms race that would inevitably lead to a horrible nuclear holocaust and what he saw as his own role in it welled up in him, and he bitterly assailed man’s suicidal pursuit of nationalistic pride.

His mind disoriented by cocaine, Chris foggily traced the similarities he found so fascinating between the lifeless espionage robots with which he worked at TRW and the flight and eyes of falcons. As Chris described the globe-circling orbits of Rhyolite satellites, his narrative shifted seamlessly into a description of his falcon sweeping through the air, and Daulton couldn’t follow from one moment to the next whether he was talking about real birds or man-made ones.

By the following weekend, Chris had come to a decision.

There was another party at Daulton’s, and like the one the week before, it ended with the two friends alone in Daulton’s living room stoned on cocaine. But it wasn’t the drug that induced what Chris was about to do. The cocaine was only a catalyst: It served to sharpen Chris’s ability to see exactly how corrupt his country’s morals had become; how the United States was living a lie, preaching democracy while propping up dictatorships, toppling democratically elected governments and murdering and maiming in the name of blind nationalism. It gave him insight into the whole cancerous tapestry of perverted American principles. What he was about to do had been taking shape in his mind for many months—perhaps since his first briefing about the Black Vault and its dirty tricks. He had decided he had no choice but to do what he was about to do.

Chris had weighed the possibility of making his proposal to Daulton on the same ground of contempt that animated his own actions. But he knew instantly this wouldn’t work. Once, perhaps, he mused, it might have, but not now. And so he appealed to the motive that he knew would energize Daulton’s will more than any other.

Chris told his friend that he had a business proposition.

In his job at TRW, he explained, he was handling classified government information that, according to a friend at work, Gene Norman, would be worth at least $20,000—maybe $50,000—every month to the Russians or the Communist Chinese. He said he and Norman had even discussed how they could do it and had agreed the best approach would be to go to a Communist country’s embassy in a third country—such as a Chinese Embassy in Africa, or the Soviet Embassy in Havana or Mexico City—and offer the material for sale.

Chris then proposed a partnership: he would obtain old classified documents and Daulton would sell them to the Russians or Chinese.

Daulton laughed at the idea.

“Man, you’re crazy,” he said, rejecting the proposal without taking it seriously.

“I’m telling you, we could make hundreds of thousands of dollars,” Chris said enticingly.

Daulton didn’t say anything, then tentatively rejected the idea again. But Chris knew his friend well. He knew his friend couldn’t turn down a mother lode like this, and he was right.

Want to keep reading? Download The Falcon and the Snowman now.