Victory at Sea: The Dramatic Rise and Fall of Naval Powers During World War II

The globe was a very different place in the years before World War II. Not only in terms of pop culture and technology—rock and roll had yet to be invented, as had mass-produced antibiotics—but the very ways in which people saw and understood the world around them. Britain was still considered the strongest empire on the planet, as it had been for generations; their degree of influence was still determined by seapower. And a Eurocentric world order prevailed, one that went largely unchallenged and seemed unshakeable.

Most people could not have foreseen that another war was brewing, one even more deadly than the Great War. Or that in less than a decade, this familiar world order would be toppled. Not only would the influence of Europe wane, to be replaced tenfold by the United States, but the ability to harness nuclear energy—a previously unheard-of weapon—would come to determine a nation’s might more than any aircraft carrier or submarine ever could.

Paul Kennedy’s latest book, Victory at Sea, traces this tumultuous transformation. To understand how the global order was upended, he looks to the strategic landscape of naval affairs. From the rise of American naval power to the near-complete destruction of the Italian, German, Japanese, and French fleets, the Great Powers’ struggle for supremacy on the waves influenced the course of the war and its aftermath. Kennedy’s thoughtful analysis is accompanied by beautiful full‑color paintings created by marine artist Ian Marshall, which vividly bring his descriptions to life.

Much has been written about World War II, an endlessly fascinating topic for historians; but “Kennedy is an academic who does not write like one; he writes a story, not a treatise” (Robert D. Kaplan, The Washington Post). Read the following excerpt of Victory at Sea for a sneak peek at this sweeping new history book, then download the book today. 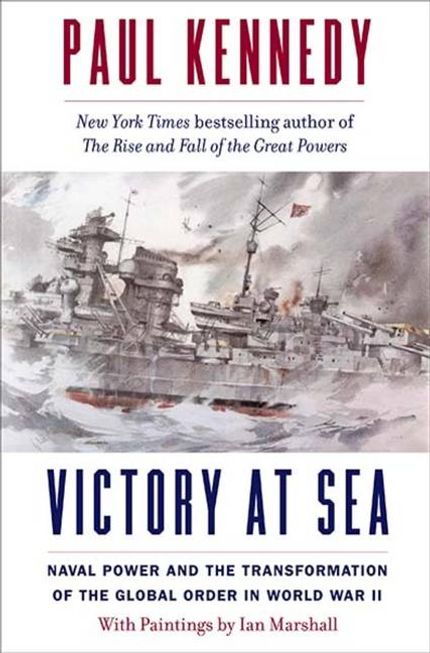 The soft, warm waters of the Mediterranean lapped gently against the sides of the two great warships anchored across from each other in Malta’s historic Grand Harbour in the summer of 1938. The fifteenth-century porticos of the Knights of St. John stood out behind the vessels. An Admiralty tug moved close by, and small boats occasionally went back and forth to the landings, but little else stirred. The world was quiet at that time, so it seemed, although not fully at peace. A keen-eyed observer might have noticed that across the top of the Hood’s and Barham’s giant gun-turrets lay several brilliant stripes; they had been painted on to indicate to aircraft flying above that both vessels, and all other British warships in the Mediterranean theater, were neutral in the Spanish Civil War still on at this time. The international arena was not entirely clear, then, of the clouds of war. That struggle for Spain was still being fought out, albeit only on land and in the air. The Italian war against Abyssinia had recently come to an end. Hitler’s Third Reich had moved without contest into Austria in the Anschluss of March 1938. In the Far East, Japan’s armies were advancing through great swathes of China. All of the Great Powers were now rearming, though some at a far slower pace than others. Still, probably only a few experts on foreign affairs at this time thought that they stood on the brink of a war that would be larger than that of 1914–18. And none of them conceived that they were only a few years away from a watershed, a near-complete break in the international system as a whole. How hard it is, given the usual blur of weekly events, to guess what comes next.

Related: The Myth About Carrots and Good Eyesight Came From WWII Propaganda

It was scenes like the one in Malta’s Grand Harbour that encouraged a broad sense of stability and security in Britain and the West, regardless of the fighting in Spain and distant China and despite the Fuehrer’s disquieting speeches. Indeed, there was such a long list of reasons to assume that things were unlikely to change very soon that it is intriguing to note them in bullet-point form, if only to enhance the starkness of the impending transformation.

To put this in another way, it was still a world in which, say, a British Army officer, schoolteacher, missionary, or rubber planter could take berth on a British India passenger ship all the way from Southampton to Bombay (via Gibraltar, Malta, Suez, and Aden) and see only British ports, British ships, and British influence. It was a world that Disraeli might have known. A mere twenty years later, by 1958, that whole world would be evaporating; thirty years later, by 1968, it would be gone. Yet thirty years is such a small stretch in the sweep of human history.

The chief reason why these scenes looked so reassuring, and the situation so unthreatened, was that a similar picture could have been seen in the Grand Harbour for generations beforehand, going back via those mid-Victorian black-and-white photos of the Mediterranean Fleet decked out for a royal visit, to the aquatint illustrations of an even earlier time, showing Nelson’s squadrons in the outer roads. Malta’s waters had somehow always reflected the tides of power. Various western European kingdoms from the Normans onward had contested control over the central Mediterranean both among themselves and against Arab and Ottoman opposition to the East. Of course, there had also been, generation after generation, Braudel’s Mediterranean world of the natural seasons in their unchanging rhythm, the patterns of local life looking similar from one region and hillside to the next. But the history of events in this sea had been important too, and in the modern age what that story of wars, diplomacy, and kingdoms showed above all was the steady decline of the non-European order after 1800 or so. A continual struggle for supremacy among the European states had spilled outward to place its stamp on much of the rest of the world, and that struggle had now arrived along the shores of North Africa and beyond. From Algiers to Jamaica to Rio to the Cape to Jakarta, European peoples were coming to impose control. The earth, or at least those parts of it accessible to the influence of sea power, was falling under the domination of the leading Atlantic maritime nations, and there was little that could be done to halt it. Merchants, capitalists, missionaries, engineers, and even schoolteachers might be pouring out of the Home Counties to Cairo and Calcutta, but ahead of them had advanced the redcoats, and behind them were the intimidating barrels of navy guns. The scene in Malta’s Grand Harbour was tranquil because, well, the West had won.

“When he is at his best, as he often is in these pages, Kennedy can be dazzling.” —Ian W. Toll, New York Times

This post is sponsored by Yale University Press. Thank you for supporting our partners, who make it possible for The Archive to continue publishing the history stories you love.