These powerful reads shine a solemn light on one of history's darkest chapters.

It remains one of history’s most enduring tragedies.

On April 10, 1912, British luxury passenger liner the RMS Titanic embarked on its ill-fated maiden voyage across the North Atlantic Ocean from Southampton, England to New York City. Nicknamed the "Millionaire’s Special" and helmed by "Millionaire’s Captain" Edward J. Smith, the Titanic was in its day one of the grandest ships the world had ever seen. It spanned 882 feet 9 inches from end to end, with a breadth of 92 feet and a gross registered tonnage of 46,328 tons. The massive luxury liner boasted electric elevators, a gymnasium, swimming pool, squash court, lavish first-class dining saloon, and a grand staircase of solid oak that descended seven levels.

Over 2,200 passengers and crew were aboard the vessel on its first and only journey across the North Atlantic. Late on the night of April 14, the "unsinkable" RMS Titanic struck an iceberg. By the early morning of April 15, it slipped beneath the waves, claiming some 1,500 lives.

The maritime disaster stunned the public and left a lasting impact on popular culture that can still be felt to this day. Countless movies, musicals, documentaries, and books have sought to capture the grandeur and catastrophe of the RMS Titanic, from New York Times bestselling narratives to James Cameron’s 1997 blockbuster movie. To mark the 107th anniversary of this historic tragedy, we gathered 11 Titanic books that shine a solemn light on one of history’s darkest nights.

Widely viewed as the definitive Titanic narrative, Walter Lord’s sweeping social history of the luxury liner and its tragic end was a New York Times bestseller when it was released in 1955—and is a must own for history fans fascinated by the momentous disaster. Lord interviewed 63 Titanic survivors and drew from a wealth of historical records and memoirs to craft his landmark account. The result is a rich and comprehensive portrait of the ship and its passengers and crew, and a gripping moment-by-moment reconstruction of its final night on the open ocean. Lord’s non-fiction narrative was adapted for the silver screen in 1958’s A Night to Remember. The author also served as a consultant on James Cameron’s 1997 film Titanic.

Related: A Night to Remember: The Tragic Story of the RMS Titanic 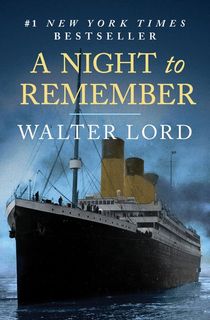 The Night Lives On

In 1985, over 70 years after the sinking of the Titanic, a French-American underwater expedition team led by Robert Ballard discovered the location of the wreckage some 13,000 feet below sea level. News of the discovery reignited interest in the ship and the unanswered questions surrounding its sinking. How could such a tragedy occur? And why were there not more survivors?

Walter Lord explores these enduring mysteries and more in The Night Lives On. Published in 1986, Night dives into the Titanic’s final hours in search of its untold stories and secrets, from the song the band played as the Titanic sank, to the failures of the liner’s wireless operators and the inaction of a nearby ship, the Californian. Buoyed by Lord’s nuanced understanding of the event, The Night Lives On serves as a powerful companion piece to the author’s landmark A Night to Remember, and a fascinating work of narrative nonfiction in its own right. 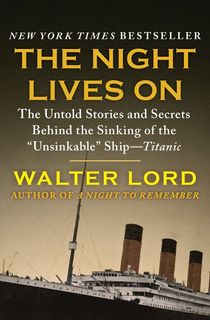 Historian Wyn Craig Wade searches for the truth amid the wreckage in this riveting account first published in 1979. Recently updated to mark the centennial anniversary of the ship’s sinking, The Titanic weaves together eyewitness accounts and revelations from the 1912 U.S. Senate hearings as well as new evidence unearthed by the 1985 underwater expedition. The author highlights the human drama and hubris at the heart of this maritime disaster, as he probes the ship’s history and the reasons behind its sinking, producing an "altogether riveting chronicle that many readers will find engrossing and enlightening." (Associated Press) 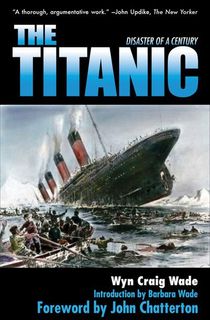 Want more maritime history? Sign up for The Archive's newsletter, and get the stories of yesteryear delivered straight to your inbox.

Who Sank the Titanic?

We all know the answer to what sank the Titanic—shortly before midnight on April 14, 1912, an iceberg tore into the ship’s starboard side and flooded its watertight compartments. But have we considered the all-too-human acts that may have contributed to the catastrophe and its staggering loss of life?

Reporter Robert J. Strange scours the archives in search of evidence of criminal negligence connected to the Titanic’s planning and construction in this penetrating work of investigative history. Citing original shipyard documents and new forensic evidence culled from the wreckage site, Strange examines the Titanic’s troubling history of cut corners and careless cost-saving measures carried out by the ship’s owners and builders. While the Titanic was advertised as one of the world’s strongest and safest seafaring vessels, Strange argues that it was anything but. 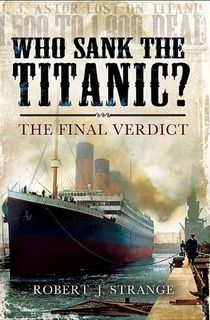 Titanic and Her Sisters Olympic and Britannic

This finely detailed reference book by Peter Davies-Garner is perfect for model ship builders interested in constructing their own Titanic replica or learning more about the physical layout of the luxury liner and her sister ships the Olympic and Britannic. Replete with scale plans, historical images, and photos of finished models, the volume presents a thorough history of the creation of each ship, and a wealth of information on the many model kits available to consumers. 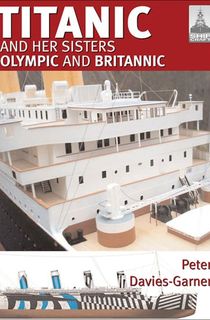 Fans of maritime history will find much to love in Liz Mechem’s survey of 60 historical shipwrecks. Rich with photographs and detailed maps of shipwreck locations, Mechem reveals the myths, mysteries, and human dramas connected to history’s famed disasters at sea. Readers will discover well-researched accounts of epic catastrophes like the Titanic and the PS General Slocum, casualties of war like the RMS Lusitania and Napoleon’s flagship L’Orient, haunting maritime narratives like the Mary Celeste and the Carroll A. Deering, and many more. 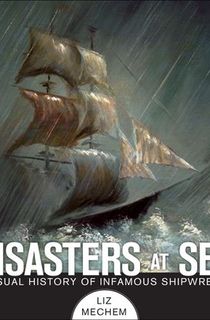 Hugh Brewster is no stranger to the sinking of the Titanic. He wrote the comprehensive reference book 882 ½ Amazing Answers to Your Questions About the Titanic and worked with Robert D. Ballard on the explorer’s 1987 bestseller The Discovery of the Titanic. Here, Brewster invites us into the gilded halls and lavish lives of the Titanic’s wealthiest passengers—from John Jacob Astor and Benjamin Guggenheim to Lady Duff Gordon and Noelle Leslie, the Countess of Rothes. Combining in-depth research with first-hand reports and rare historical photographs, Brewster presents a glittering account of the luxury liner’s first-class patrons and the final flashes of America’s Gilded Age and England’s Edwardian era. Readers interested in learning more about the Titanic’s passengers, especially those travelers below the ship’s exclusive top decks, should next check out Richard Davenport-Hines’ Voyagers of the Titanic: Passengers, Sailors, Shipbuilders, Aristocrats, and the Worlds They Came From.

Related: Lost at Sea: What Happened to the Mary Celeste? 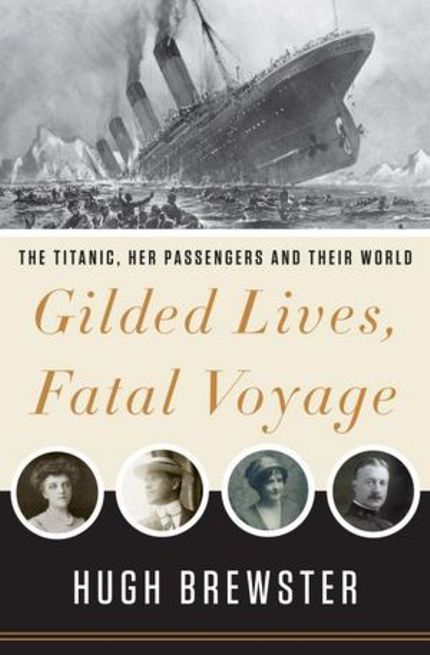 Shadow of the Titanic: The Extraordinary Stories of Those Who Survived

While plenty of books chart the Titanic’s doomed journey across the North Atlantic, far fewer narratives hone in on the ship’s 705 survivors and the lives they lived after the catastrophe. Award-winning journalist Andrew Wilson draws on letters, diary entries, interviews, and more to tell the survival stories of these men, women, and children and the wildly different paths they followed in the wake of the event. Some flourished and found fame after they emerged from the icy North Atlantic waters; others were unable to escape the long and crushing shadow of the disaster. Deborah Davis, author of Strapless: John Singer Sargent and the Fall of Madame X, hails Shadow of the Titanic as an "eloquent chronicle of the dark side of survival" that delivers "a spellbinding voyage into the uncharted depths of the Titanic tragedy."

The Band that Played On: The Extraordinary Story of the 8 Musicians Who Went Down with the Titanic

Of the many tales of heartbreak and heroism associated with the Titanic, few are quite as stirring as that of the ship’s eight musicians who chose to remain on board and play music as the disaster unfolded. Music journalist Steve Turner draws on historical documents and the memories of surviving family members to piece together the fascinating life stories of these eight players, the winding paths that brought them to the Titanic and the final notes they played as the ship slipped beneath the waves. 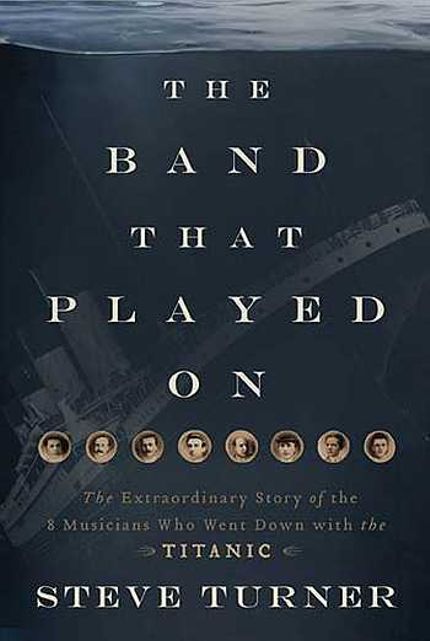 The Other Side of the Night: The Carpathia, the Californian and the Night the Titanic was Lost

Maritime and military historian Daniel Allen Butler first explored the sinking of the Titanic in his New York Times bestselling book, Unsinkable: The Full Story of the RMS Titanic. In The Other Side of the Night, the author sets his sights on the two ships within proximity of the catastrophe: the Carpathia and the Californian. The Carpathia, captained by Arthur Rostron and over fifty miles away from the Titanic when the ship struck an iceberg, rushed through treacherous waters to assist; the Californian, captained by Stanley Lord and far closer to the sinking ship, decided against responding. Alternating in real time between the Carpathia and the Californian, Butler crafts a riveting historical narrative of the rescue effort to save the Titanic’s passengers and crew—documenting its success stories and revealing just how much more could have been done. 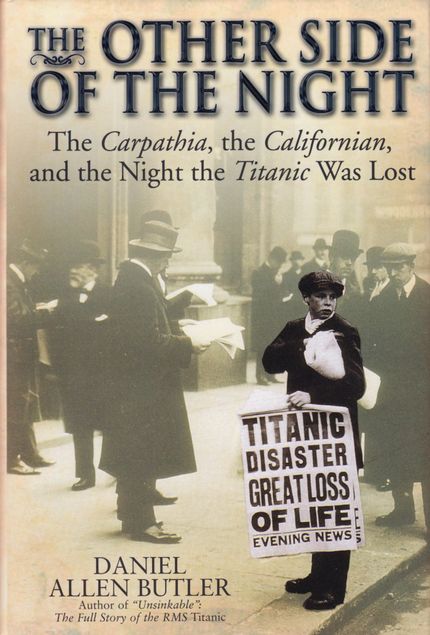 The Story of the Titanic As Told by Its Survivors

This essential volume collects four historical accounts of the Titanic tragedy as written by survivors who lived to tell the tale. Included here is "The Loss of the S.S. Titanic" by Lawrence Beesley; "The Truth about the Titanic" by Col. Archibald Gracie; "Titanic" by Commander Lightoller, the second officer of the ship and the most senior member of the crew to survive; and "The Thrilling Tale by Titanic’s Surviving Wireless Man" written by wireless operator Harold Bride and first published in the New York Times on April 28, 1912. Packed with period detail and haunting descriptions of the terror and bravery on display that night, The Story of the Titanic As Told by Its Survivors presents a deeply personal side to one of history’s greatest tragedies. Readers interested in first-hand Titanic accounts should also read Filson Young’s classic survival narrative, Titanic.

This post is sponsored by Open Road Media. Thank you for supporting our partners, who make it possible for The Archive to celebrate the history you love.