The Deadly Collision Between SS Andrea Doria and MS Stockholm

Like the sinking of the RMS Titanic, the 1956 shipwreck was one of the worst maritime disasters of the 20th century.

Late at night on July 25th, 1956, two ocean liners struck each other just off the coast of Nantucket. Within several hours, one of them would lie at the bottom of the Atlantic—while the other, relatively unscathed, would continue sailing into the 21st century as a cruise ship.

On July 17th, the prized SS Andrea Doria departed from Genoa, Italy for one of its usual nine-day journeys to the United States. After making stops in France, Naples, and Gibraltar, she held roughly 1,700 guests and crew. Meanwhile, MS Stockholm was making the opposite voyage, as she embarked on a routine route from New York to Sweden. At the time, she was the smallest passenger liner on the North Atlantic—half the size of Andrea Doria, in fact—and carried 742 people the evening of the collision.

Want more maritime history books? Sign up for The Archive's newsletter and get our recommended reads delivered straight to your inbox.

As day turned to night on July 25th, a heavy fog settled in. Andrea Doria and Stockholm were bound for one another in the same shipping corridor, with their captains none the wiser. Realization dawned far too late: Just minutes before the crash, the ships attempted to make a clean pass—but to no avail. Instead, the distance between Andrea Doria and Stockholm narrowed, making a collision inevitable.

Andrea Doria did not sink for another 11 hours, giving the crew and guests enough time to seek refuge on boats that had responded to their distress calls. Stockholm suffered minor damages in comparison, and it even took 500 Andrea Doria passengers to safety. But while thousands of lives were saved, the crash ranked alongside the sinking of the RMS Titanic as one of the worst maritime disasters of the 20th century.

The New York Times bestseller Collision Course explores the ins and outs of the fatal crash, explaining its causes and devastating aftermath. Author Alvin Moscow, a former Associated Press journalist, also goes beyond the event itself, following the subsequent trial that determined who was at fault for the tragedy. The following excerpt of Moscow’s book takes readers into a scene of utter chaos, as Andrea Doria’s passengers learn of the collision and begin to react. 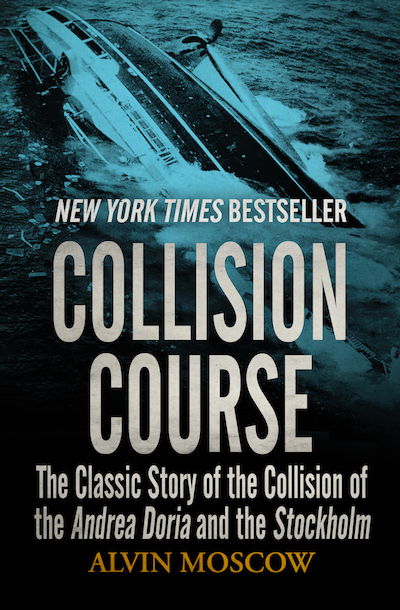