The Guadalcanal Battle: An Eyewitness Account of One of the Most Pivotal Offensives of World War II

Combat correspondent Richard Tregaskis recounts what he saw when the Allies invaded the island of Guadalcanal in 1942.

The Guadalcanal Campaign, also known as the Battle of Guadalcanal, marked the first major offensive made by Allied forces against the Empire of Japan during World War II. On August 7, 1942, the Allies invaded the island of Guadalcanal in order to force Japanese troops out, and implemented an air, land, and sea assault that had never before been attempted.

From the suffocating heat and humidity to the threat of crocodile-infested streams, volunteer combat correspondent Richard Tregaskis was there for it all. In his book, Guadalcanal Diary, the journalist describes the first two months of the campaign, which lasted until February 1943, and recounts the harrowing experiences of the young marines who made the operation a success.

2017 marks the 75th anniversary of the battle. Read on for an excerpt from Guadalcanal Diary, and then download the book. 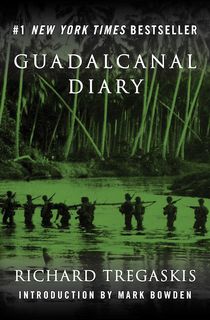 It was no trouble to get up at four o’clock this morning, without benefit of alarm clock, for my mind had been trained for this day for a long time.

Everyone was calm at breakfast. We knew we must be very near our objective by this time, probably at the moment passing directly under the Jap shore guns. And the fact that we had got this far without any action made us feel strangely secure, as if getting up at four o’clock in the morning and preparing to force a landing on the enemy shore were the perfectly normal things to do of an August morning in the South Seas. We had a heavy breakfast and passed a normally humorous conversation.

Up on the deck the situation was the same. Everyone seemed ready to jump at the first boom of a gun, but there was little excitement. The thing that was happening was so unbelievable that it seemed like a dream. We were slipping through the narrow neck of water between Guadalcanal and Savo Islands; we were practically inside Tulagi Bay, almost past the Jap shore batteries, and not a shot had been fired.

On the deck marines lined the starboard rail, and strained their eyes and pointed their field glasses toward the high, irregular dark mass that lay beyond the sheen of the water, beyond the silently moving shapes that were our accompanying ships. The land mass was Guadalcanal Island. The sky was still dark; there was yet no pre-dawn glow, but the rugged black mountains were quite distinct against the lighter sky.

There was not much talking among the usually vivacious marines. The only sounds were the swish of water around our ship, the slight noises of men moving about on the forward deck.

Up on the bridge I found the ship’s officers less calm than the marines. Theirs was the worry of getting the ship to anchorage without her being sunk, and they seemed high-strung and incredulous.

“I can’t believe it,” one lieutenant said to me. “I wonder if the Japs can be that dumb. Either they’re very dumb, or it’s a trick.”

But there was no sign of any tricks as we plowed on into the bay, and the sky began to throw light ahead of us, and we could see even the misty outline of Tulagi and the Florida group of islands squatting to the east and north.

Now the rugged mass of Guadalcanal Island, on our right (to the south), was growing more distinct, and the sharp shoulders of the high mountains could be seen. But there was no sign of any firing from shore, nor were any enemy planes spotted.

Suddenly, from the bridge, I saw a brilliant yellow-green flash of light coming from the gray shape of a cruiser on our starboard bow. I saw the red pencil-lines of the shells arching through the sky, saw flashes on the dark shore of Guadalcanal where they struck. A second later I heard the b-rroom-boom of the cannonading. I should have been ready for that, but was nervous enough so that I jumped at the sound.

Our naval barrage, which was to pave the way for our landing, had begun. I looked at my watch. The time was 6:14.

Two minutes later, a cruiser astern and to our starboard side began firing. There were the same greenish-yellow flashes as the salvo went off, the same red rockets arching across the sky, geysers of red fires where the shells struck shore, a terrifying rumble and boom of the explosion.

Now, fore and aft, the two cruisers were hurling salvo after salvo into the Guadalcanal shore. It was fascinating to watch the apparent slowness with which the shells, their paths marked out against the sky in red fire, curved through the air. Distance, of course, caused that apparent slowness. But the concussion of the firing shook the deck of our ship and stirred our trousers legs with sudden gusts of wind, despite the distance.

At 6:17, straight, slim lines of tracer bullets, a sheaf of them, showered from the bay in toward the shore, and simultaneously we heard the sound of plane motors. Our planes were strafing, we knew, though in the half-light we could not make out the shapes of the aircraft.

Want more World War II history books? Sign up for The Archive's newsletter and get historical content delivered straight to your inbox.

Then there were more showers and sheafs of tracers needling into the dark land-mass, and we could see the red lines forming into shallow V’s, as, after they struck into their targets, they ricocheted off into the hills.

A moment later my heart skipped a beat as I saw red showers of machine-gun tracers coming from low on the shore and apparently shooting seaward at an angle toward our ships. Was this the answering fire of the Japs? Was heavier firing going to follow? Was this the beginning of the fireworks?

The answer was not clear. When the firing was repeated a few seconds later, it looked more like ricochet than it had before.

Whatever the firing was, it stopped shortly after that, and from then on, there was no visible Jap resistance.

Related: The Long, Strange History of the Maunsell Sea Forts

At 6:19 another cruiser, dead ahead of us, began firing. A moment later other warships joined, and the flash of their firing, and the arcs of their flying shells, illumined the sky over a wide span ahead.

Other ships of our force—the group under Gen. Rupertus—had turned to the left toward Tulagi, and there were the heavy reports of cannonading coming from them now.

At 6:28, I noticed a brilliant white spot of fire on the water ahead, and watched fascinated, wondering what it was, while it burgeoned into a spreading sheet of red flame. Planes were moving back and forth like flies over the spot.

“It’s a Jap ship,” said the ship’s officer standing next to me. His field glasses were leveled on the flames. “Planes did it,” he said. “They were strafing.”

Now the sheet of red flame was creeping out into a long, thin line, and then it was mounting higher and higher into a sort of low-slung, fiery pyramid. For long minutes we watched the flames while the din of our thundering naval guns increased and reached a climax around us.

Ahead of us, to the left of the still brightly burning Jap ship, I saw a bright, white pinpoint of light blink into existence. It was a masthead light riding atop the Australian cruiser which had led our procession into the bay. (The Canberra, sunk in subsequent naval action in the Solomon Islands area.)

Our ship was still moving forward, however, and the flaming ship ahead was growing nearer. In the light of the red-orange flames we could see that it was not a large ship, and that it was low in the water. Possibly it was 120 feet long. “What kind of ship is it?” I asked a deck officer.

“They say it’s a torpedo boat,” he said. But it was in fact a schooner which had been carrying a load of oil and gasoline—whence the flames.

Our dive-bombers were swooping low over the beach. In the growing daylight you could see the color of the explosions where bombs were landing. Some, which struck at the edge of the water, had a bluish tinge. Others, hitting farther back in the sand and earth, were darker.

As the planes dived, they were strafing. The incandescent lines of their tracers struck into the ground, then bent back ricocheting toward the sky to form the now-familiar shallow V.

Our ship and one other, the vanguard of the transport fleet, slowed and stopped. Immediately, the davits began to clank as the boats were lowered away. There were a hubbub of shouts and the sound of many men moving about the ship. On the forward deck, a donkey engine began to chuff and puff. It was time for the beginning of our landing adventure.

It was daylight, but ahead the mass of flames that was the burning Jap boat glowed as brightly as in the dark of night. There were new explosions, as we watched, within the fire—probably gasoline tanks. A burning oil slick spread across the water astern of the boat. And the thought crossed my mind that if there had been anyone alive aboard that ship, he certainly was not alive now.

Our ship and the other transports had swung bow-in toward Guadalcanal, and landing boats were in the water. More were on the way down to the tune of clinking davits. All around us, we could hear the muffled thrumming of engines; boats were cutting in and out at every angle, circling, sliding close alongside. It was cheering to see that each boat carried a small American flag at the stern.

Troops, a mass of moving green uniforms, jammed the forward deck. A sailor leaned over the rail with a signal flag, beckoning landing boats to come up beside the rope nets that served as dismounting ladders. There was something peaceful about the bustle of activity. For a moment one almost forgot about the Japs who might be waiting on shore with machine guns and artillery to blast us out of the water as we came in for a landing.

Our accompanying cruisers, which had stopped firing for a few moments, were opening up again. One, lying astern and to our starboard side, was sending salvo after salvo into a dark point of land. A column of dense black smoke was rising from the spot where the shells were landing. And as we watched, the base of the column glowed red and orange, and the boom of a distant explosion came to us.

We knew a gasoline or oil dump had been hit, because the red flames continued to soar at the base of the smoke column, and from time to time there were new explosions, so that the flames leaped momentarily higher into the sooty black smoke.

I walked among the troops gathered on the forward deck, and found them silent and nervous—a contrast to the gaiety and song which had filled the few preceding days. There did not seem to be much to say, although a few lads came up with the inevitable, “Well, this is it.”

Want more World War II history books? Sign up for The Archive's newsletter and get historical content delivered straight to your inbox.

This post is sponsored by Open Road Media. Thank you for supporting our partners, who make it possible for The Archive to continue publishing the historical stories you love.