Ruth Gruber: The Making of a Trailblazing Female Correspondent

In Ahead of Time, Gruber reflects on the early years of her career, including the assignment that took her back to 1930s Germany.

Born in Brooklyn to Russian Jewish parents, Ruth Gruber had always dreamed of becoming a writer. After receiving a PhD at a Cologne university—a record-breaking achievement, as Gruber was the youngest to do so—she landed the opportunity of a lifetime. Armed with a new fellowship and an assignment from the New York Herald Tribune, she returned to Europe in 1935, tasked with studying the lives of women under fascist, communist, and democratic regimes. It was the beginning of a career marked by incredible, harrowing experiences—including a 1943 sea voyage with Jewish refugees—that sealed her legacy as a trailblazing 20th century female journalist.

Ahead of Time is one of several Ruth Gruber memoirs in which she recounts her adventures. Here, she focuses on her early days as writer—from her studies in 1930s Germany to her expeditions in the Soviet Arctic. In the excerpt below, having just arrived in Berlin as the Tribune's new Special Foreign Correspondent, she visits a local Jewish community center to better understand the plights of women and Jews in Nazi Germany.

Read on for an excerpt of Ahead of Time, and then download the book. 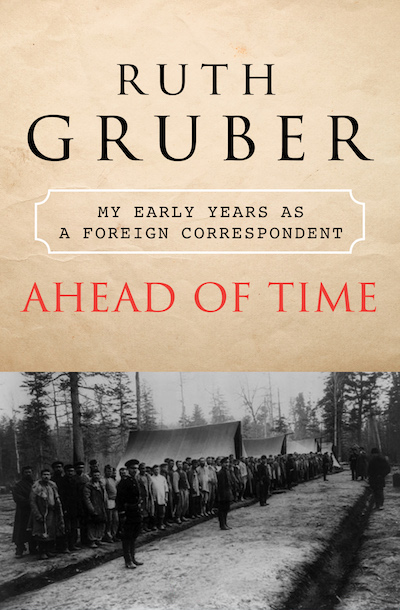 I sat in the hot second-class coach headed for Berlin, pretending to read. I would not show fear to the men in their felt hats and double chins and the buxom women in their shapeless dresses and sensible shoes. I fingered the papers in my bag—my ticket to Poland and the USSR, my passport with its pages stamped with visas for half of Europe. Everything was in order, yet my heart was racing.

An SS man with polished boots flung the compartment door open. His narrowed eyes slowly surveyed me. I felt like a spy.

The Berlin Hauptbahnhof was crowded with soldiers, SS men, police, and travelers. Was I being followed? I tried to walk nonchalantly out to the street. Did those SS men eyeing me see that the hands carrying my suitcase and typewriter were trembling? I hailed a taxi and gave the driver the address: Oranienburger Strasse 28. Did he know it was the Jüdische Gemeinde, the office of the Jewish community?

Berlin looked clean and orderly. A mild wind rustled the leaves along the broad Unter den Linden and sent swastika flags waving. Posters with Hitler’s face were plastered on nearly every street column. Army trucks packed with soldiers honked as they rolled by.

The cab pulled up in front of the “Neue Oranienburger Strasse Synagoge,” still called the New Synagogue, though it had been built in 1866. Three six-pointed Stars of David rose delicately above its three domes. It looked like a Moorish Alhambra.

It was not the synagogue I wanted but the simple office building next to it, the community building that was the center for many of Berlin’s 160,000 registered Jews.

I climbed a flight of stairs to a small unpretentious office, bare save for a desk and two straight chairs. A middle-aged woman with sharp brown eyes sat behind the desk.

“How can I help you?” A small sign gave her name—Anna Sommers.

“Why don’t the Jews all get out of Germany?” I asked abruptly.

“Before I answer,” she said, and turned on the radio sitting in front of her. Loud music filled the room as she went on in a low voice, “Now you’d better tell me something about yourself.”

“Sit down. What’s an American Jew doing in Berlin?”

I slipped into a chair and handed her my credentials from the Herald Tribune. She scrutinized my face slowly and waited.

Want more memoirs? Sign up for The Archive's newsletter and get our recommended reads delivered straight to your inbox.

“I’m trying to find out what’s happening to Jews and to women in the Third Reich. I came to get some answers.”

“You came five thousand miles to get answers? Are you brave or stupid?”

“I want to know why Jews aren’t rushing to get out.”

The collar of my dress was wet. “Some get out. The family I lived with in Köln is already in Amsterdam.”

“Lucky people. What country wants us? Go to the American consulate. You’ll see people lining up every day to get a number. It’s a long and slow process. If you get a number like five thousand, you may have to wait five or six years before you can leave—if ever.”

“And if they have relatives in America?”

“Have you seen the documents your State Department makes American citizens fill out to prove they can take care of their German relatives? They want bank accounts, income tax records, employers’ recommendations, proof that our people won’t become a burden on your government.”

“But Americans do fill out the documents, don’t they?”

“Many do. But some send letters with excuses. I have copies on my desk. ‘We would love to help you, but we don’t have a job.’ ‘We don’t have a big enough apartment.’ ‘We’re sending three children to college.’ ”

“You make me ashamed of my countrymen.”

“Some of our people have given up trying to get into America. Instead, they’re trying to get certificates from the British consul for Palestine.”

“Then why don’t they all go to Palestine?”

Her eyes grew dark. “Wir sind unbewegtich.” [We are immobile.]

“When your family has lived in a country for hundreds of years, it’s hard to move. You have a house. You have a business. It’s hard to leave it all. And there are many who say, ‘We’ve been through crises before. Germany is a civilized nation. What can they do to us?’ I don’t know what your father does. But can you picture him just leaving everything and running?”

I tried to picture Papa piling the trunk of the Buick with suitcases, Mama on a ladder taking down her homemade curtains, the rest of us filling cartons with pots and pans. I shook my head. “You’re right. We are immobile.”

She began to speak more passionately. “We all know America has its own diseases. Our Nazi papers run ugly pictures about those young Negroes, the Scottsboro boys, saying how Negroes rape white prostitutes. And our German-Jewish papers write about fascists like that priest in Detroit, Father Coughlin. But you live in America without fear. That’s how we lived in Germany until two years ago.”

Want more memoirs? Sign up for The Archive's newsletter and get our recommended reads delivered straight to your inbox.

“I—I said all the wrong things. I had no right to press you so hard.”

She turned the radio up even louder. I leaned forward to hear her words.

“You’re a journalist, yes? You have more questions?”

“How do Jews who’ve lost their jobs stay alive?”

“They come here to us. We support them. The state gives us the money.”

“The Nazi government gives you money?”

“Oh, it’s all Jewish money. We’re taxed for it. It was this way even before the Nazis. Every Jew, every Christian, every citizen must pay a ‘religious tax’ to the government. The state then gives each religious community the money to run its own institutions.”

“So then the government knows exactly who is a Jew or a Catholic or a Protestant?”

“Of course. Any time you move, you have to go to the police, give them your new address, and of course, fill in the line about your religion.”

I thought of the people being herded down the Hohestrasse in Cologne. “That means the Gestapo and the police have every name; they don’t even have to search to find someone.” Somehow just saying it frightened me.

She looked at the radio playing loud music on her desk. “You say you’re interested not only in Jews but in women?”

“We’re not yet as endangered as Jews, but we’re getting close to losing everything we won under the Weimar Republic. Pushed back a hundred years. Told to go home and bear children. Told to forget politics, ambition, careers.”

“Are women fighting back?”

“With what? Votes? Guns? Power? Jewish women who’ve spent years working for their degrees are being thrown out of the universities. Women studying to be doctors are dismissed from their labs and hospitals. Anyone known to be, or suspected of being, a communist or a socialist has already been arrested. Some of my friends have been shot”—she drew quotation marks in the air—“’ trying to escape.’ ”

“Aryan communists or socialists have the same fate. Only those who join the Nazi party are on pedestals. You’ve heard of the BDM girls, the Bund Deutscher Mädchen [the League of German Maidens] who march in their brown uniforms. Their faces all shine—you should see—with love for the Führer. A real passion, as if they wanted to sleep with him.”

Somewhere I had read a joke about the BDM girls: “Those girls are so in love with their leaders that they have a picture of Goebbels tattooed on one breast and a picture of Goering on the other. After a few years think what long faces Goebbels and Goering will have.”

Through the closed window came the sound of drums and brass, of soldiers marching.

“May I give you some advice?” she asked suddenly.

“Get out of Berlin. Get out of Germany. You don’t have to wait in line like the rest of us for a visa to leave. I know what you’re going through. You want to see with your own eyes what Jews and women are experiencing. You feel the terror and the danger in your heart. And you want to write about it. You’re a young woman starting her career. I don’t want to see you end it here.”

“I’m not afraid,” I said, but even as I said it, I felt my stomach tighten. “What can they do to me—an American?”

“Nobody is safe anymore. They don’t need an excuse. They can pick you up and say you were trying to change dollars on the black market. Do you think your United States consul can save you? How do you know some secret agent didn’t follow you here from the railroad station?”

Her eyes glanced at the radio and then around the room to the shuttered windows.

“I’m talking to you as if you were my daughter. I have a daughter your age and I wish I could help her get out. Maybe things will change here. Maybe they’ll get better in a year or two. Come back then. I promise I’ll answer any questions you have. Only please take my advice. Go. Go now. Go today. You can help us.”

She came from behind her desk, put her arms around me, and kissed me.

Want to keep reading? Download Ahead of Time, by Ruth Gruber.