"I've Been to the Mountaintop": Revisiting the 1968 Assassination of Martin Luther King Jr.

Gerald Posner examines that fateful day and the man responsible for King's murder in Killing the Dream.

On April 4, 1968, Martin Luther King Jr. was assassinated. A symbol of the Civil Rights Movement of the 1950s and ‘60s, King was a nonviolent advocate for racial equality. But like many great leaders, his life ended too soon.

A reverend in Alabama, King’s public activism most notably began with the Montgomery bus boycott in 1955. Following 15-year-old Claudette Colvin’s refusal to give up her seat on a bus, as well as Rosa Park’s own noncompliance with the racial segregation laws of the time nine months later, King led the boycott that lasted for 385 days. The protest transformed King into a leader of the Civil Rights Movement. On August 28, 1963, King joined some 250,000 demonstrators at the March on Washington, where he delivered his now-iconic “I Have a Dream" speech.

But on that fateful spring day in 1968, just one day after he delivered his “I’ve Been to the Mountaintop” speech, King was fatally shot while standing on the balcony of a Memphis motel. His assassin was James Earl Ray, a man who evaded capture for two months and insisted he had unwittingly participated in a conspiracy. Investigative journalist Gerald Posner takes a detailed look at King’s assassination and the man behind it in Killing the Dream.

Read on for an excerpt from Killing the Dream, and then download the book. 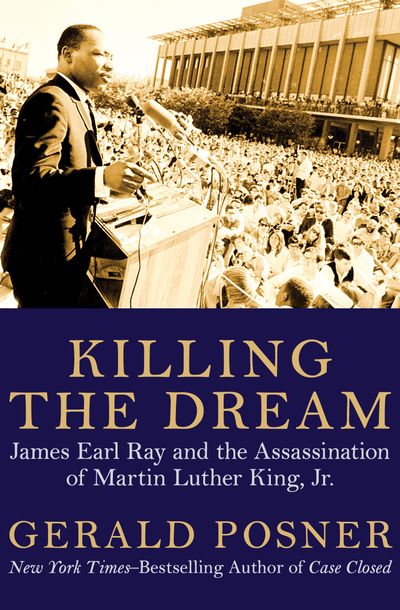 In his second-floor room, Dr. King was getting ready to leave for the Reverend Billy Kyles’s new home for dinner. Standing in the bathroom in his trousers and an undershirt, he began applying a powerful depilatory to his face. It was made by mixing water with Magic Shave Powder—which had a horrible odor, akin to rotten eggs—into a thick mud. Because of his sensitive skin, it was the only way King could shave. He applied it using a spatula and in a few minutes, when it dried into a claylike mask, used the spatula to scrape it off. “Under similar circumstances most men would have grown a beard,” said Abernathy, “but Martin was meticulous about this particular procedure, and it was one reason he was always late.” On this day, Abernathy was with him, and he sought King’s advice about the difficulty he was having in arranging for a revival-week speaker in Atlanta who would not conflict with the Poor People’s march on Washington.

There was a knock on the door shortly after 5:30. It was Billy Kyles. King was still dressing, while Abernathy sat on the edge of the bed. They started teasing Kyles about the upcoming meal. Unknown to Kyles, King had already had Abernathy call Mrs. Kyles to learn about the night’s menu: roast beef, pigs’ feet, candied yams, chitlins, and vegetables.

“All right now, Billy, I don’t want you fooling me,” said Abernathy. “Are we going to have some real soul food? Now if we go over there and get some filet mignon or T-bone, you’re going to flunk.”

“We don’t want no filet mignon,” chimed in King. “Yeah, now we don’t want you to be like that preacher’s house we went to in Atlanta. Had a great big house, we went over there for dinner and had some ham. A ham bone.”

“Yeah, there wasn’t no meat on it,” agreed Abernathy.

“Yeah, we had Kool-Aid and it wasn’t even sweet,” said King. “And if that’s the kind of dinner we’re going to, we’ll stay here.”

“We’re going to have soul food,” said Kyles. “Now just get ready, let’s go.” They were supposed to be there by 6:00, but King, true to form, was running late.

“I know your wife, she’s so pretty,” King said. “Are you sure she can really cook soul food?”

King had trouble buttoning the top of his shirt, and the other men teased him about getting fat. As he fussed with his tie, the three changed the subject. “It was just preacher talk,” recalls Kyles, “like people talk baseball talk, or barbershop talk.”

It was approaching 6:00 P.M. Darkness would arrive in less than half an hour. King finished splashing some sweet-smelling cologne over his face and neck to mask the odor of the Magic Shave Powder and walked outside onto the balcony that ran along the front of the motel. Having seen King put on cologne, Abernathy went to his room to do the same. In the courtyard below was the white Cadillac loaned to King by the local funeral home. Its driver, Solomon Jones, Jr., stood nearby. SCLC general counsel Chauncey Eskridge and aides Andrew Young, James Bevel, Jesse Jackson, and Hosea Williams were milling around the car. Kyles stood near King on the balcony. King leaned over the edge of the three-foot-high railing and began talking to some of those in the courtyard. He told Eskridge to invite Jackson to dinner with them. Jackson walked closer to the balcony with another man. “Doc, this is Ben Branch. Ben used to live in Memphis. He plays in our band.” King told Jackson to get ready to leave and chided him, “You know the whole band can’t go to dinner with us.”

King leaned a little farther over the balcony. “Ben,” he said, “I want you to sing for me tonight. I want you to do that song ‘Precious Lord.’ Sing it real pretty.”

Branch nodded enthusiastically. “I sure will, Doc.”

Want more books about history? Sign up for The Archive's newsletter and get our recommended reads delivered straight to your inbox.

Solomon Jones yelled out that King should put on a topcoat since it might be chilly later. “O.K.,” King replied, and he started to straighten up. Kyles had turned to walk down to get his car. He had taken about five steps when he heard a loud report and spun around to see King’s body, in profile, lying in a growing pool of blood on the balcony. “Oh, my God, Martin’s been shot!” someone screamed. “Hit the ground,” someone else yelled. Those in the courtyard instinctively took cover near the limousine. Abernathy looked out his door upon hearing the noise and saw King crumpled on the balcony, then bolted outside and gathered his friend in his arms, patting his head.

“I looked down at Martin’s face,” Abernathy recalled. “His eyes wobbled, then for an instant he focused on me. ‘Martin, it’s all right. Don’t worry. This is Ralph. This is Ralph.’”

King had been struck in the lower right jaw by a single .30-06 bullet. It was a fatal shot. Because of the angle at which King was standing, the bullet smashed his jawbone, pierced his neck, tearing major blood vessels and nerves, including the jugular vein, and then severed the spinal cord before coming to rest in his shoulder blade against the skin.

Pandemonium erupted at the Lorraine, with King’s aides and friends, other guests, and reporters all scurrying about trying desperately to find out what had happened. Most thought the shot had come from across the street, in the vicinity of the rooming house. Solomon Jones had jumped into the car and was driving it frantically back and forth across the parking lot as though doing so might exorcise what had just happened. Kyles was pounding the bed in a motel room as he tried to get an ambulance. Others were gathering around King on the balcony, trying in vain to see some flicker of life in their fallen leader.

Just before the shot was fired, W. B. Richmond was the policeman on duty responsible for watching King through the peephole that had been cut into the newspapers covering the fire station windows. A fireman, George Loenneke, came into the locker room to get a pack of cigarettes. He asked Richmond if he could look through the peephole for a moment. As he put his eye to the window, he saw King on the balcony, leaning on the railing, looking down and talking to someone in the parking lot. Then there was the crack of a rifle. “He’s been shot,” yelled Loenneke. He ran back into the main part of the fire station, screaming the news.

There had been no contingency plan in case of trouble at the Lorraine or an attack on King. Richmond ran from his observation post to a telephone several feet away and placed a call to the intelligence section at police headquarters to inform them of the shooting. Simultaneously, all the other police officers and firemen responded instinctively, immediately rushing out of the station and toward the Lorraine. Most dropped over an eight-foot retaining wall at the rear of the fire station in their rush to the crime scene. However, that meant they ran away from South Main Street, the road on which the rooming house fronted, and from which any shooter would emerge. That was fortuitous for the assassin, who could not have known when he picked his perch at the rooming house that the neighboring fire station was teeming with police.

Featured photo of Martin Luther King Jr. speaking at the University of Minnesota in 1967: Wikipedia