Discover Emma Goldman's Life of Anarchy in To the Barricades

Goldman was a revolutionary from the start. Her work in the U.S. and Russia shook up governments and oligarchs.

In May 1886, a young woman named Emma Goldman read a newspaper story that would change her life. Days before, on May 4, there had been a labor demonstration in Chicago’s Haymarket Square, calling for the institution of an eight-hour work day. Police killed several of the striking workers the day before, leading to a larger, seemingly peaceful meeting.

That peace was shattered when someone threw a bomb at the police, killing seven officers and four demonstrators and wounding dozens of others. The tragedy became known as the Haymarket affair, and anarchist groups were blamed for it. Seven anarchists were sentenced to death after a widely criticized trial – it was clear that none of the defendants threw the bomb, yet all were declared guilty.

Emma Goldman read about the Haymarket Affair and instantly was drawn to the ideals of the anarchist movement. After immigrating from Russia to Rochester, NY, Goldman moved to New York City. On her very first day in the city, she met Alexander Berkman, a leading member of the anarchist movement who encouraged her to attend a speech with him that same night. She agreed, and the pair listened to Johann Most speak. Most often encouraged violence as a means to promote the anarchist movement, which he called “propaganda of the deed”. Goldman was fascinated by his ability to enthrall and motivate a crowd. Most became Goldman’s mentor for a time, before they parted ways over differing beliefs regarding women’s independence.

Looking for unknown stories of the past? Sign up for The Archive's newsletter, and get fascinating tales delivered straight to your inbox.

Goldman and Berkman worked to further the anarchist movement; Berkman even attempted to kill Henry Clay Frick, a wealthy factory manager who staunchly opposed unions. The pair believed that Frick’s death would incite more factory strikes. Berkman shot Frick multiple times, but none were lethal. Berkman was imprisoned, and Goldman was on her own to continue their work.

During the Panic of 1893, Goldman went to Union Square to speak to crowds about the high unemployment rates from the depression. She gave one of her most famous speeches, where she encouraged the workers to rise up and demand rights, which some bystanders believed was promoting violence. After giving the speech, Goldman was arrested and imprisoned.

Goldman suffered immensely as a result of sharing her beliefs. She was eventually deported to Russia – the US government feared that she would start an anarchist revolution. Goldman took her exile as an opportunity to travel the world and spread her ideas across Europe.

The complexity of her life and beliefs is detailed in Alix Kates Shulman’s biography, To the Barricades: The Anarchist Life of Emma Goldman. Shulman illuminates everything from Goldman’s bleak Russian upbringing to her exile and death. She remains a symbol of the anarchist movement and one of the earliest feminists.

Read on for an excerpt of To the Barricades, which details the powerful Union Square speech that made Goldman famous and put her on the run. 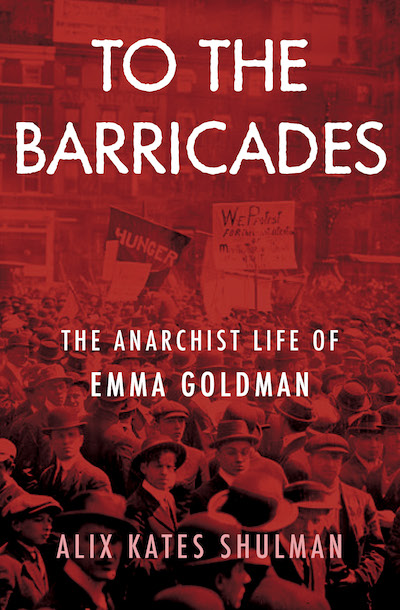