A Slave No More: Two Men Who Escaped to Freedom

Slave narratives are rare; they were written in a time that didn’t permit the stories of African-Americans to be told. These two accounts, written by Wallace Turnage and John Washington, were written long ago, but only recently made it to print.

David Blight examines both stories and pairs them with his own research to fashion a riveting and informative read on one of the most tumultuous time periods in American history. A Slave No More is a thoroughly-researched and eye-opening account of these men’s escape from slavery and of the turmoil and excitement that came with the prospect of freedom.

Read on for an excerpt of David Blight's A Slave No More, and then download the book. 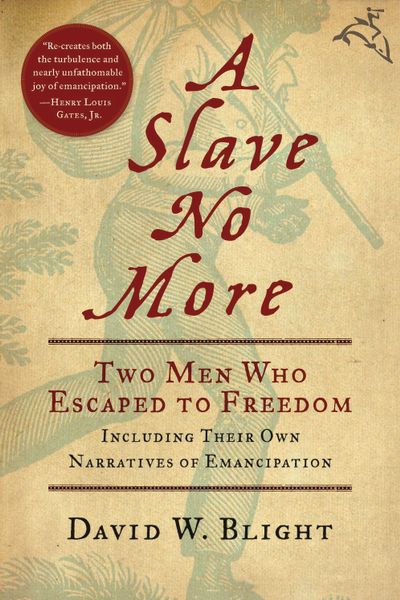 As he arrived on a cotton plantation in Alabama, the teenage Turnage felt a terrified bewilderment over how he could be both so valuable and so brutalized at once. On his first day he was, by his account, quickly “initiated according to their way of treatment.” Welcomed by the other slaves on a work crew who were eager to hear any news of “Old Virginia” (the home from which many of them had been sold away), Turnage soon met a “shabbily dressed man” with a bull whip—his first of many cruel overseers. The overseer pulled a woman out of the group for some offense, yanked her dress up, and whipped her “shameful.” Turnage, who had spent his youth on a tobacco farm where the treatment was less harsh, declared this scene “rough for the first day.” He was now a true field hand.

That night in the quarters, the disoriented Turnage seemed astonished as his fellow slaves engaged in “fiddling and dancing as though they had no oppression at all.” Wallace spent the summer trying to acclimate to the dawn-to-dusk labor and recurring violence. Horns blew in the morning to awaken the weary laborers. Slaves were frequently beaten, especially women who were forced to “strip right before the men.” By the fall Turnage had himself been beaten three or four times, and he had resolved to “go in the woods and go back where I come from.”

Despite his fellow slaves’ dire warnings that he had no hope of escape, Turnage ran away for the first time that fall of 1860. For most of his ensuing narrative, he struggles to create the persona of the heroic runaway—a young, desperate, tortured rebel confronting an evil system and calculated violence. Irrationally, but persistently, he wanted to run away “home,” wherever and whatever that actually meant to him. Wallace had no home except for his tangled memories of Snow Hill and his mother. Whether those memories sustained him we cannot know. His faith that “the Lord” somehow protected him in his times of hunger, fear, and physical pain clearly buttressed his spirit. But Turnage found his ultimate freedom through a tunnel of horrors.

As autumn arrived, “about corn gathering time,” he experienced “sore hands” and could not pick enough cotton to meet the overseer’s demands. Two slave women also fell behind on picking their prescribed allotments. Turnage describes a sadistic overseer who forced the two women to the ground and delivered “two hundred lashes” to one of the women’s naked back: “I could see the skin fly about every lick he struck her.” Rather than wait for his beating for failing to pick enough cotton, he slipped off into the woods.

His faith that “the Lord” somehow protected him in his times of hunger, fear, and physical pain clearly buttressed his spirit. But Turnage found his ultimate freedom through a tunnel of horrors.

Turnage admits he “didn’t know where to go” on his first escape and had to return to his plantation when he was overtaken by hunger. Other slaves claimed the master would protect the famished fifteen-year-old from the overseer’s whip if he would come home, and, in fact, his master did. His owner kept him safely at the big house for two days before returning him to field labor. Horton, the overseer, “pretended” to be glad about Wallace’s return; but Turnage imagines scenes reminiscent of Frederick Douglass’s famous struggle against his overseer, Edward Covey, who had been hired to tame Douglass’s rebellious ways. Covey’s “forte,” wrote Douglass, “consisted in his power to deceive.

Turnage now engaged in a war of wills with his deceptive tormentor. As Horton approached him with the cowhide in hand, Wallace determined to make a stand and fight. He refused to obey any commands and “spoke very saucy.” With a bravado typical in many male slave narratives, Turnage declares himself an “expert wrestler,” and he took on the overseer in a two-hour brawl in which his savage foe bit his ear. Wallace got the best of the fiendish Horton, but eventually the white man enlisted a strong male slave from among the thirty or so watching the fight to tie the young rebel down. Held to the ground, hands tied to a tree, Turnage endured ninety-five lashes (his count) as the price of his resistance. As a writer, he could not avoid using the episode for a little comic relief: He describes a scene in which Horton visits a fellow overseer that evening and embarrassingly must account for all the scratches on his face from his rumble with Turnage. By reconstructing a dialogue between the two agents of slavery’s violence, the former slave relishes his remembrance of “marking” the cruel overseer’s face.

Turnage attempted a second escape less than a year later, prompted again by the overseer’s threat of more beatings in response to his insubordination. By June 1861, from the slave grapevine of information as well as the military mobilization he could see around him, Turnage had gained two advantages—a much better grasp of local geography and the knowledge that the war might soon come to Tennessee and Mississippi. Turnage lit out across the Alabama line into Mississippi for what he hoped was a “refuge in a strange country.” He traveled as far into the state as Columbus (about twenty-seven miles from Pickensville) before he encountered a white man with a shotgun who fired and missed. Turnage writes of these escapes as both adventure and horror. Bullets flew by his “ears and shoulders cutting the leaves like so many hornets,” but he outran them. He feared only men with horses or guns, he maintained, because he was a very fast runner.” In his “wild and half-starved” condition, Wallace appears to have circled back toward Pickensville.

There a white man along the road challenged his identity. Slave codes required that a slave carry a pass when away from his plantation. Not able to produce one, Turnage jumped a fence and ran into a cornfield at such a speed that the “roasting ears almost knocked me down.” He burst onto a group of slaves working in a field, with the master’s dogs nearby. Some of the bondsmen threw their hoes at him and the dogs set off in hot pursuit. Turnage ran until he came upon a “very deep ditch.” “The Lord” helped in his desperate leap over the ditch, and the dogs fell in and could not get out.

Want more historical books excerpts? Sign up for The Archive's newsletter, and get our recommended historical reads delivered straight to your inbox.

Once Turnage arrived back in Pickensville, a friend gave him food and hid him in the steeple of his own master’s church. The torrid heat and lack of water brought him down every night to get food from his protector. By day Wallace could see his master “as he passed by . . . going to his store but he did not know that I was there.” Turnage’s brief residence in the steeple, observing the town and the slave economy below, is not unlike Harriet Jacobs’s much longer and more famous years of confinement in her grandmother’s attic, peering through her “little loophole,” where she “heard the patrols and slave-hunters conferring together about the capture of runaways.” There she “peeped at [her] children’s faces, and heard their sweet voices.” Wallace’s travail in the hot steeple was not nearly as anguished nor as long, but he, too, yearned to “breathe the pure air,” as Jacobs had. That yearning might have been what drove him outside during the day, where he was caught by a man with a pistol who saw the young fugitive hiding in some bushes, his white straw hat too obvious to miss.

Frustrated, but not willing to give up his valuable slave, Chalmers now kept the teenager close to him as a house servant. But not without beating him severely. Even Chalmers’s wife had Turnage whipped until the slave-owning couple “thought they had broke me.” But by late November of 1861, “tired of being whipped,” the intrepid sixteen-year-old bolted up the road toward northern Mississippi. On this third attempt, he would make it much farther and stay at large until the depth of winter on a journey he portrayed as both thrilling and terrifying. Indeed, Turnage’s memoir fits a genre critics have called the fugitive slave “road narrative.” Henry Bibb, in his 1849 Narrative of the Life and Adventures of Henry Bibb, describes his five different escapes and captures between 1837 and 1841. The thing he knew best, he said, was the “art of running away,” and from an early age, he “made a regular business of it.” Turnage’s third escape saga is replete with episodes of extreme hunger, high rivers to cross, military guards at bridges, and hiding in barns, a gin house, and a church. Some fellow slaves take him in and protect him, and at least a couple do not.

Unlike some other road narrative authors, Turnage never expresses any moral anguish over the lies, deception, theft, and breaking down of doors that enabled him to survive. Heading north toward Tupelo, Mississippi, where he could at least hope to eventually reach the Union armies, Turnage struggled against bloodhounds, the winter cold, near starvation, and extreme brutality until he was finally captured. He portrays himself as an agile youth with desperate courage and some good luck, but who was destined to be caught by the police state of slavery in wartime Mississippi.

Want to keep reading? Download A Slave No More now.

Featured image of Wallace Turnage circa 1880, in his early thirties: Historical Society of the Town of Greenwich, Connecticut