Excerpt: A Night to Remember, by Walter Lord

With the Titanic's fate all but sealed, the decks descend into chaos as passengers scramble to save their lives. 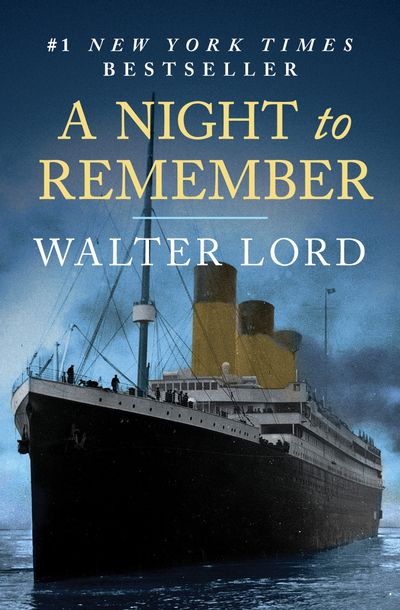 THE OTHER SHIPS JUST didn’t seem to understand. At 1:25 the Olympic asked, “Are you steering south to meet us?” Phillips patiently explained, “We are putting the women off in the boats.”

Then the Frankfort: “Are there any ships around you already?” Phillips ignored this one. Again the Frankfort, asking for more details. This was too much. He jumped up, almost screaming: “The damn fool! He says, ‘What’s up, old man?’” Then he angrily tapped back: “You fool, stand by and keep out.”

From time to time Captain Smith dropped in—once to warn that the power was fading … again to say she couldn’t last much longer … later to report that the water had reached the engine room. At 1:45, Phillips begged the Carpathia: “Come as quickly as possible, old man; engine room filled up to the boilers.”

Meanwhile Bride draped an overcoat over Phillips’ shoulders, then managed to strap a life belt on him. The problem of getting him into his boots was more complicated. Phillips asked whether any boats were left—maybe the boots wouldn’t be needed.

Once he turned the set over to Bride, he went out to see what was happening. He returned shaking his head: “Things look very queer.”

They looked queer indeed. The sea now slopped over the Titanic’s forward well deck … rippled around the cranes, the hatches, the foot of the mast … washed against the base of the white superstructure. The roar of steam had died, the nerve-racking rockets had stopped—but the slant of the deck was steeper and there was an ugly list to port.

About 1:40, Chief Officer Wilde shouted, “Everyone on the starboard side to straighten her up!” Passengers and crew trooped over, and the Titanic swung sluggishly back on an even keel. The work on the boats resumed.

As No. 2 prepared to cast off at 1:45, Steward Johnson, his pockets bulging with oranges, yelled up to the Boat Deck for a razor to cut the falls. Seaman McAuliffe dropped one down, calling, “Remember me at Southampton and give it to me back!” McAuliffe was probably the last man on the Titanic so sure of returning to Southampton.

First Officer Murdoch knew better. As he walked along the deck with Chief Steward Hardy of Second Class, he sighed, “I believe she’s gone, Hardy.”

There was no longer any difficulty persuading people to leave the ship. Paul Maugé, the Chef’s Assistant, jumped 10 feet into a dangling boat. Somebody on a lower deck tried to drag him out, but he squirmed free and was safe.

Third Class passenger Daniel Buckley—safely through the broken gate and onto the Boat Deck—took no more chances. With several other men he jumped into a boat and huddled there crying. Most of the men were hauled out, but somewhere he got a woman’s shawl. He said Mrs. Astor put it over him. In any case, the disguise worked.

Another young man—no more than a boy—wasn’t as lucky. Fifth Officer Lowe caught him under a seat in No. 14, begging that he wouldn’t take up much room. Lowe drew his gun, but the boy only pleaded harder. Then Lowe changed tactics, told him to be a man, and somehow got him out. By now Mrs. Charlotte Collyer and other women in the boat were sobbing, and her eight-year-old daughter Marjory joined the uproar, tugging at Lowe’s arm and crying, “Oh, Mr. Man, don’t shoot, please don’t shoot the poor man!”

Lowe paused long enough to smile and nod at her reassuringly. The boy was out now, anyhow, lying facedown near a coil of rope.

But No. 14’s troubles weren’t over. Another wave of men rushed the boat. Seaman Scarrott beat them back with the tiller. This time Lowe pulled his gun and shouted, “If anyone else tries that, this is what he’ll get!” He fired three times along the side of the ship as the boat dropped down to the sea.

Murdoch barely stopped a rush at No. 15. He yelled at the crowd, “Stand back! Stand back! It’s women first!”

All the way forward, there was more trouble at Collapsible C, which had been fitted into the davits used by No. 1. A big mob pushed and shoved, trying to climb aboard.

Two men dropped in. Purser Herbert McElroy fired twice into the air. Murdoch shouted, “Get out of this! Clear out of this!” Hugh Woolner and Bjornstrom Steffanson—attracted by the pistol flashes—rushed over to help. Yanking the culprits by arms, legs, anything, they cleared the boat. The loading continued.

Jack Thayer stood off to one side with Milton Long, a young shipboard acquaintance from Springfield, Massachusetts. They had met for the first time this evening over after-dinner coffee. Following the crash, Long—who was traveling alone—attached himself to the Thayer family, but he and Jack lost the older Thayers in the crowd on A Deck. Now they were alone, debating what to do, supposing the rest of the family was already off in the boats. They finally decided to stay clear of Boat C. With all the uproar, it seemed bound to tip over.

“But they were wrong. Things gradually straightened out, and finally Boat C was ready for lowering. Chief Officer Wilde shouted to know who was in command. Hearing him, Captain Smith turned to Quartermaster Rowe—still fiddling with the Morse lamp—and told him to take charge. Rowe jumped in and got ready to lower.

Close by, President Bruce Ismay stood, helping get the boat ready for lowering. He was calmer now than in those early moments when Lowe had bawled him out—in fact he seemed every inch an accepted member of the Titanic’s crew.

This was a frequent role for Ismay, but by no means his only one. Sometimes he preferred the role of passenger. So far during the voyage he had shifted back and forth several times.

At Queenstown he was a sort of super-Captain. He told Chief Engineer Bell the speed he wanted for various stages of the voyage. He also set the New York arrival time at Wednesday morning, instead of Tuesday night. He didn’t consult Captain Smith on this.

Later, at sea, Ismay was mostly a passenger, enjoying the fine cuisine of the à la carte restaurant … shuffleboard … bridge … tea and scones in his deck chair on the port side of A Deck.

This Sunday he was enough a member of the crew to see the ice message that arrived from another ship. In the bright, sunny Palm Court—just as the bugler sounded lunch—Captain Smith gave him a warning from the Baltic. During the afternoon Ismay (who liked to remind people who he was) fished it out of his pocket and waved it at Mrs. Ryerson and Mrs. Thayer. In the smoking room before dinner, while the twilight still glowed through the amber-stained windows, Captain Smith sought and got the message back. Then Ismay walked down to the restaurant, immaculate in his dinner jacket, very much a First Class passenger.

After the crash he went back to being in the crew—up with the Captain on the bridge … consulting with Chief Engineer Bell … and now, despite the tongue-lashing from Fifth Officer Lowe, shouting orders about the boats.

Then came another switch. At the very last moment, he suddenly climbed into Boat C. Down it dropped, with 42 people including Bruce Ismay—just another passenger.

Most of the passengers were different. William T. Stead, independent as ever, sat reading alone in the First Class smoking room. To Fireman Kemish passing by, he looked as though he planned to stay there whatever happened.

Reverend Robert J. Bateman of Jacksonville stood outside, watching his sister-in-law Mrs. Ada Balls enter a boat. “If I don’t meet you again in this world,” he called, “I will in the next.” Then as the boat jerked down, he took off his necktie and tossed it to her as a keepsake.

Related: Day of Infamy: Inside the Destruction of the Pacific Fleet at Pearl Harbor

George Widener and John B. Thayer leaned against the Boat Deck rail, quietly talking things over. Contrary to young Jack’s guess, his father wasn’t safe in a boat and, in fact, didn’t have any idea of entering one. A little way off, Archie Butt, Clarence Moore, Arthur Ryerson and Walter Douglas stood silently together. Major Butt was very quiet, had no pistol, took no active part, despite the stories later told that he practically took charge.

Further aft, Jay Yates—described as a gambler hoping to make a maiden-voyage killing—stood alone and friendless. To a woman entering a boat, he handed a page torn from his appointment book. Signed with one of his aliases, the note read, “If saved, inform my sister Mrs. F. J. Adams of Findlay, Ohio. Lost. J. H. Rogers.”

Benjamin Guggenheim had a more detailed message: “If anything should happen to me, tell my wife I’ve done my best in doing my duty.”

Actually Guggenheim almost outdid himself. Gone was the sweater that Steward Etches made him wear. Also his life belt. Instead he and his valet now stood resplendent in evening clothes. “We’ve dressed in our best,” he explained, “and are prepared to go down like gentlemen.”

There were a few couples too. The Allisons stood smiling on the Promenade Deck, Mrs. Allison grasping little Lorraine with one hand, her husband with the other. The Strauses leaned against the Boat Deck rail, their arms about each other’s waist. A young Western couple waited nearby; when Lightoller asked the girl if he could put her in a boat, she told him cheerfully, “Not on your life. We started together and, if need be, we’ll finish together.”

Want to keep reading? Download A Night to Remember today.