Steven Pressfield's latest historical novel investigates the years after the death of Jesus.

Just over 20 years after the death and resurrection of Jesus, Rome and its territories are in uproar. The burgeoning empire responsible for the preacher’s crucifixion suddenly found that the execution they thought would rid themselves of a threat instead focused the growing sect of Christians in their midst.

In Steven Pressfield’s latest enthralling novel, readers travel back to Jerusalem in the first century C.E. There, you’ll meet Telamon of Arcadia, a mercenary and former Roman legionary, charged with intercepting a Nazarene carrying the words of Jesus via the Letters of Paul to settlements around the outskirts of Roman civilization. 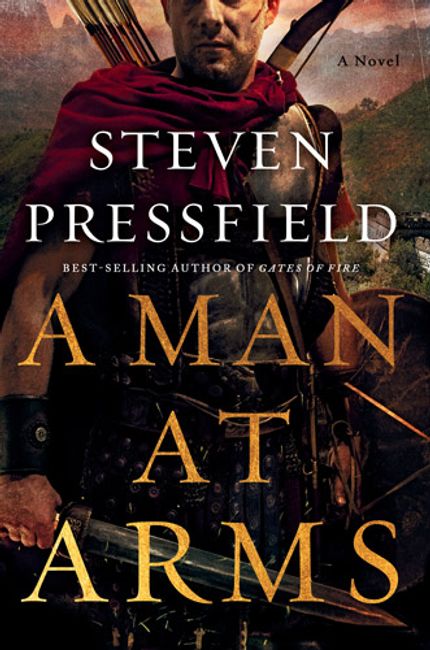 Telamon, taciturn and highly skilled, is willing to do what the Romans ask of him—for a certain price. But when this antiquitarian Ron Swanson finds himself with a new apprentice, a sorceress, and a mute young girl as companions, his motivations begin to shift.

Related: 11 Roman History Books Beyond The Rise and Fall of the Roman Empire

A Man at Arms explores an era just after a major historical shift, mining the moment for its own intrigue and the changes that are necessarily following after an event that changes history for good. This book marks Pressfield’s return to the ancient world after a 13-year break from the era that inspired his beloved Tides of War and Gates of Fire.

It also contains his return to Telamon, a character who has appeared in two previous books. As Pressfield told us, “Readers had been asking me for years to bring him back, to write a book entirely about him. But I had never been able to find a story that I felt did him justice.

“Suddenly I thought, ‘What if Telamon is given the assignment by the Romans to stop Paul’s letter? What if unexpected events and ironic twists intervene? What if we had a wild chase across desert and sea that culminated with this immortal, incendiary letter either reaching its destination or being cut off?’”

Related: The Unparalleled Power of the Praetorian Guard of Rome

Pressfield’s tale takes Telamon and his cohort through the Sinai desert as they pursue an epistle that is meant to give strength and succor to the burgeoning Christian community—inspired by Pressfield’s own deep relationship with 1 Corinthians.

No matter your personal feelings about religion, this compelling novel will appeal to historical fiction lovers of all stripes. With military intrigue, strong female characters, and an entry into an under-investigated era of history, A Man at Arms has all the qualities we look for in a tale inspired by the past.

This post is sponsored by W.W. Norton. Thank you for supporting our partners, who make it possible for The Archive to continue publishing the history stories you love.