The American doctor was a beacon of hope for the soldiers he treated during his tour of duty.

On March 8, 1965 the first U.S. combat troops arrived on the shores of China Beach, launching America’s involvement in the Vietnam War. It was a decision that would spark an ongoing, divisive controversy: Was their interference truly needed?

Ultimately, the desire to inhibit the spread of Communism won out. The U.S.—as well as other anti-Communist countries—backed the similarly inclined South Vietnam in a battle against the communist north. But despite multiple attempts at peace (specifically the 1973 Peace Accord) and protests, the war continued until the North Vietnamese captured Saigon in 1975.

It was an extremely violent and deadly war. Over the course of nearly 20 years, more than one million Vietnamese, Laotians, and Cambodians were killed. After entering the conflict, United States soldiers were not spared either: 60,000 American lives were lost.

However, some were saved thanks to the efforts of doctors like Ronald Glasser.

Glasser was deployed to Japan in 1968, where he worked at the U.S. Army hospital Camp Zama—the only one in the country. A pediatrician, Glasser was tasked with tending to the children of military officers and government officials, but he “soon realized that the troopers they were pulling off those medevac choppers were only children themselves.” Ultimately, this shifted his views of the carnage he witnessed day after day.

Relatively speaking, the hospital at Zama was a great facility: There were 700 beds and a small pediatric unit. It was also well staffed. The doctors' varied expertise allowed them to effectively treat the wounded, who poured in with broken bones, burns, illnesses, and worse.

Though he focused on the children, Dr. Glasser also found himself talking to the injured soldiers, learning more about the boys who were so willing to give their lives for their country. Each of them had a different story, though they all shared the same concern: Would anyone love them, injuries and all, when they returned home? Once again, Glasser was reminded of their innocence and humanity, which were so often forgotten in the chaos of war.

In his bestselling book 365 Days, Ronald Glasser remembers these boys and brings a human voice to an unimaginable tragedy. Rather than describe the offensives and tactics with cold and distant precision, Glasser uses compassion and respect to chronicle the Vietnam War through the eyes of those who experienced it. In the following excerpt, he introduces Peterson—one of Zama’s general surgeons—who, in a way, waged his own battle. His discharged patients were sometimes sent back to the front lines, where they completed their unfinished 5-month tour. Wanting to protect them, Peterson bended the rules, deliberately prolonging hospitalization until his patients’ deadlines passed. But even so, some of his boys could not refuse the call of duty. 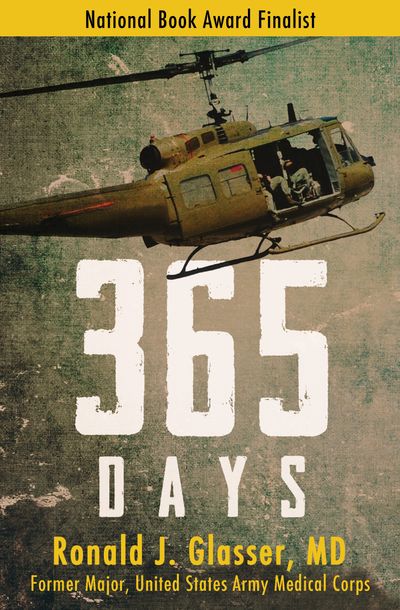