The Korean War Told From Both Sides

On June 25, 1950, North Korea invaded South Korea—starting the Korean War. And though the war ended in a stalemate three years later, the two nations remain at odds to this day.

The U.S., U.K., and several other nations aided South Korea in their fight against the North, which was aided by China, and more than one million soldiers and countless civilians lost their lives during the comparatively brief conflict. Through previously undisclosed Chinese documents, Pulitzer Prize-winning author John Toland investigates Chairman Mao of the Communist Party of China’s direct involvement in the conflict in his comprehensive book In Mortal Combat: Korea, 1950-1953. Additional interviews with soldiers on both sides shed light on the horrific conflict and vividly describe the realities of war.

Toland examines all angles of the war—from the rumored American brutality of Korean civilians to allegations of American use of biological warfare. He weaves these well-known stories together with the lesser-known tales of individuals’ experiences to construct a moving must-read for all fans of history.

Read on for an excerpt from In Mortal Combat: Korea, 1950-1953, which describes the Battle of the Bowling Alley, and then download the book. 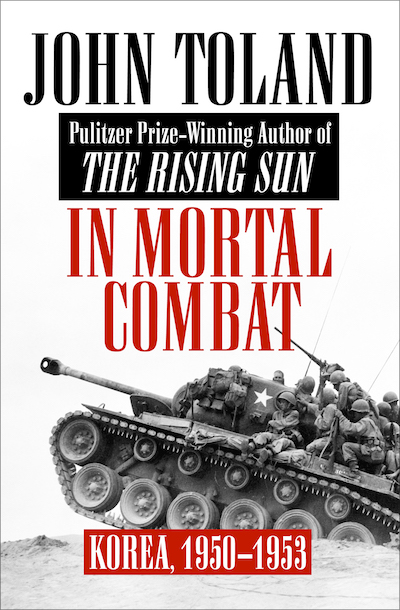 Fifteen air miles northeast of the center of Taegu, another ferocious battle was being waged, this one in the rugged, barren hills on both sides of a long valley that had once been fertile and peaceful. The area was that defended by Brigadier General Whitey Paik’s 1st ROK Division, but such a host of enemy had converged on this approach to Taegu that General Walker had been forced to send his fire brigade to Paik’s aid.

While the Marines were seizing Obong-ni Ridge on August 18, Mike Michaelis, now promoted to brigadier general, was ordered to attack north on the road leading to Taejon with the 27th Infantry Regiment of the 25th Division. At the same time, Paik was ordered to attack with two regiments on either side of the almost straight, poplar-lined highway.

Michaelis’s trucks rolled northward until they could see NKs and ROKs fighting on the high hills overlooking the road. His infantry dismounted, then deployed with one bat“talion on each side. Tanks led the way and at about one P.M. opened fire on the mountain escarpments. The rumble of their cannonade made an unearthly echo through the narrow valley. An enemy outpost withdrew, and for an hour the American infantry advanced with almost no opposition. Then Michaelis got word that Paik’s two regiments on the high ground flanking the valley had not been able to advance. Michaelis was ordered to stop and form a perimeter defense. A platoon of tanks took positions at the front, with two on the road and four behind in reserve. The artillery set up their guns, and six bazooka teams set up in front of the infantry. Shortly after dark, NK mortars and artillery unleashed heavy preparation fire. Two T-34’s and a self-propelled gun moved to within two miles of the American lines. There was a fierce encounter and both T-34’s were destroyed. Three more NK tanks came down the road, then suddenly switched on their running lights and scurried back north. Soon after midnight all was quiet. A second, weaker attack was dispersed by artillery and mortar fire.

This was only a taste of things to come for Paik, who had already narrowly escaped capture twice during the past week. Now he and Michaelis faced two strong North Korean divisions, the 1st and the 13th, whose tank regiments had been recently supplied with twenty-one new T-34’s.

During the day a public relations officer in Taegu told Bert Hardy, a newly arrived British correspondent, that the other correspondents had cleared out, since it appeared obvious that Taegu was falling. A short, stocky man entered. It was General Walker. Annoyed at the depressing picture the public relations man was giving, he exclaimed gruffly, “Lot of damn nonsense! They’ll never take the town. My advice to you is to stay put!”

The past week had been a hectic one for Walker. He was spending most of his days flying low over enemy lines with Mike Lynch or jeeping up front with Joe Tyner. Walker was in his element, sending his fire brigade wherever it was needed most, and quietly relieving officers who were too old or inexperienced to handle battlefield crises. His appearance up front was reassuring to those men whose officers had misled them. He often stopped to give short pep talks to enlisted men. They were up against a tough enemy, he would say, and things were rough, but there would be no bugout back to Pusan. The perimeter was going to hold, and reinforcements were arriving every day.

His appearances on the streets of Taegu were equally reassuring to the civilians. That day shells had landed near the railroad station, and his presence helped turn panic flight into a more orderly withdrawal towards Pusan. Sunday, August 20, was relatively quiet, with U.S. planes strafing North Korean positions so close that expended cartridges fell onto friendly foxholes.

Want more Korean War books? Sign up for The Archive's newsletter and get history stories delivered straight to your inbox.

Walker went up northeast to observe how Paik and Michaelis were doing, and returned to the city to tell correspondents that Taegu “certainly is saved.” On Monday morning Michaelis’s men saw white flags out front. Natives reported that some North Korean troops wanted to surrender. An American patrol received scattered rifle and artillery fire. They found five disabled T-34 tanks.

Late that evening artillery raked the 27th Infantry positions until midnight. Then the People’s 13th Division struck at Paik’s troops on the high ground and the Americans in the valley. Tanks and self-propelled guns hit the 27th as enemy infantry came forward on both sides of the road. Other infantry attacked on the high ridges.

During all this, Paik’s men fought valiantly to hold the high ground and prevent the enemy from enveloping the Americans on the road. During first daylight of the 22nd, exhausted groups of his division came down to the valley to bathe in a stream and find food, but they always climbed back to their positions covered by American artillery.

At one point, however, a battalion commander called Paik at his CP and said, “General, I must retreat.”

“Retreat? What do you mean?”

“I must withdraw.” His left flank was already falling back. “I can’t hold.”

“You’re going to stay there, Colonel, until I come up and investigate.” After a short jeep ride, Paik started climbing to the battalion position. Men were fleeing in disorder. Paik managed to gather a large group. “Gentlemen,” he said, “I am going to lead you and we are going to attack. If I retreat, you must shoot me.” He gave the order to charge and, armed with a pistol, led the way back to the original position. Heavy fire broke out, but Paik continued as if impervious to bullets, followed by the battalion. The enemy started to fall back, and after half an hour his men begged him to stop. He was a division commander and didn’t belong up front.

He watched as they retook the hill, then returned to his CP. Michaelis had learned of the retreat and sent an urgent message to Walker, claiming that ROK troops on his left had fallen back and “are not fighting.” Paik bitterly protested, and investigation proved that his people were back in place. When Michaelis learned what Paik had done, he apologized and praised him for his heroic performance. From then on they were close friends.

Another North Korean attack that night was easily repulsed, and by early afternoon of August 23 Brigadier General Michaelis reported to Walker that the People’s 13th Division, after blowing up and mining the road out front, was pulling back. Walker ordered his fire brigade to return to the 25th Division near Masan; the Battle of the Bowling Alley was over and Taegu was saved.

Want more Korean War books? Sign up for The Archive's newsletter and get history stories delivered straight to your inbox.