The Strange and Tragic Shipwreck of the Morro Castle

Fire brought down the ship—but was it an accident, or arson?

This is the terrifying reality those aboard the SS Morro Castle faced in the very early morning hours of September 8, 1934. Disoriented and confused about what was happening, the crew and passengers were pushed out onto the ship’s deck as wind howled around them, further spreading the cause of the panic: A fire.

The cause of the fire remains unclear, but it started in a storage locker within the First Class Writing Room on B Deck. And within just 30 minutes, the entire ship was engulfed in flames. Many mysterious and unfortunate factors led to the ship’s tragic end, killing 137 passengers and crew members. The ship’s captain died of an alleged heart attack the evening before the fire broke out, and the fire swept so rapidly through the cabin that it cut off all power to the ship—shutting down the electricity, radio communication, and steering control. Morro Castle was only able to send one SOS signal before power was lost.

But how was the fire started? And was the ship’s terrible end due to more than just slow response time from crew members and rescuers? Gordon Thomas and Max Morgan-Witts argue in their investigative true crime book, Shipwreck: The Strange Fate of Morro Castle, that the fire was no accident, but started by a crewmember: George White Rogers, chief radio officer.

Read on for an excerpt of Shipwreck: The Strange Fate of the Morro Castle and then download the book. 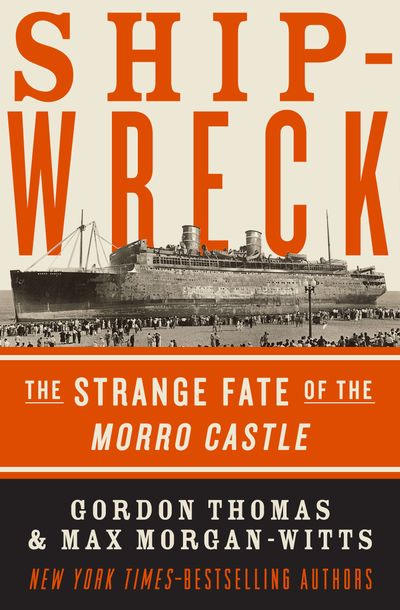 “At exactly 2:50 A.M. Sydney Ryan paused in his glass collecting and turned to Campbell.

Both smelled smoke—coming from a long way forward.

At 2:51 A.M. student engineer Tripp wrote in his log: “Night watchman Foersch reported to captain that he had just seen and smelled smoke coming out of one of the small ventilators on the port after side of the fiddley.”

The fiddley was a galvanized-iron duct supplying fresh air to the first-class writing room on B deck, among other rooms.

While Tripp was making his notes, Warms acted. He rushed to the fiddley, near number one stack. A trickle of smoke emerged from the opening. Turning, he ran to rouse his senior officer.

Warms was calm and collected in responding to the emergency.

Back on the bridge, the acting captain gave his first order to fight the fire. He told Hackney: “Go down below and find the source of “he fire and let me know the situation fast.”

As he ran from the bridge Hackney grabbed a fire extinguisher.

At that moment Campbell and Ryan reached the door of the writing room, puffing slightly from their run. An antique wall clock registered the time. The men paused and surveyed the room. Smoke, like a layer of low-lying smog, carpeted the room.

“It’s in that locker!” Campbell shouted.

Opening the locker, he saw a mass of flames inside. Quickly, he slammed shut the door, blistering his hands in the process.

Both men turned and ran from the room to raise the alarm. As they ran, they passed a fire extinguisher placed on the wall near the writing-room door.

It was the first mistake by members of a crew poorly trained in fire drills, rescue operations, or virtually any crisis. If Campbell and Ryan had turned that extinguisher on the fire at once it might have made a critical difference.

He yanked open the locker door and a wall of flame rushed out. Hackney backed off and emptied his extinguisher into it, but it was a waste of time—a dozen extinguishers could not have contained the inferno now raging around the locker.

Stunned, Hackney watched the flames lick across the false ceiling. It was he who had given the order for the Lyle gun and its deadly keg of powder to be placed immediately above.

Choking from the smoke, he turned and ran from the writing room.

He had made the second fatal mistake.

Solid-steel fire doors had been built into entrances to the public rooms to deal with just such an emergency. It would have taken Hackney only a few moments to isolate the writing room from the rest of B deck by lowering its fire door.

Clarence Hackney did not take that preventive measure. Smoke billowed after as he ran for the telephone near the door connecting the first-class lounge to the smoking room. He dialed the bridge.

“Break out the hose and I’ll get you the men,” Warms ordered. “Get all the fire hydrants uncapped—fast!”

The acting captain had reacted swiftly— and he continued to do so. He called down to the engine room: “I want all water pressure possible.”

“We’ve got a boiler still out,” a voice replied. “What do you want the pressure for?”

“Fire,” retorted Warms. “Get all the pressure you can to the hydrants!”

The bridge itself was an oasis of calm. The sounds of a new storm breaking against the ship drowned out all conversation.

Warms ordered a textbook change of course, turning the ship head on into the wind and sea to reduce the effect of the squall.

As the ship lurched and yawed around to its new heading, Warms ordered the bridge lookout to rouse the seamen in the forecastle. It was 2:55 A.M.

At that moment Ivan Freeman arrived on the bridge, out of breath. He had gone straight from his cabin below to B deck—to be met by a wall of smoke billowing across the lounge. Behind it he could see flames.

He immediately telephoned the engine room and told the duty crew to get up all possible pressure on the fire lines.

Then he ran for the bridge. When he reached it he told Warms: “It’s bad. We should run for the beach in case we have to get the passengers off.”

For a moment Acting Captain Warms said nothing. Then he walked over to the Derby automatic fire-detecting system. Each light represented a thermostat in a stateroom or the quarters of the officers and crew. The system did not cover the public rooms. Not a single light flashed red on the board. And the smoke-detecting system was still switched off.

Apparently reassured, Warms told Freeman: “We are not going yet. We can hold her. Get down and take charge.”

He then spoke to the engine room by telephone. The duty engineer reported a little smoke coming in through the cooling vents.

“Get steam on the main fire pump,” Warms ordered. “And have Abbott call me the moment he gets to you.”

Warms turned to the helmsman and checked the course: the Morro Castle was cutting through the Atlantic at the fullest speed possible with one boiler closed down, on a heading of 2°, almost due north, into a storm which struck the ship head on.

At that moment Clarence Hackney rushed onto the bridge.

“It’s getting worse! We’ll need every man on the hose!”

This time Warms did not hesitate. He set off the general fire alarm.

The quartet of drinkers from the bar moved toward the lounge doorway, sipping their highballs. They watched, fascinated, as the smoke rolled toward them. Suddenly stewards Campbell and Ryan and night watchman Arthur Pender rushed past them. Each man clutched a fire extinguisher, which he turned on the smoke.

But it was futile. Half a dozen hoses under full pressure would have been required to make an impact on the blaze enveloping the writing room. Even if fire crews had brought hoses to bear on the flames, it would have made little difference: the engine room was unable to provide sustained pressure because of the closed boiler.

The smog in the lounge itself had become so dense that it effectively masked the fire beyond.

“Can’t you stop all that smoke?” shouted one of the girl passengers petulantly. “It’s going to ruin my dress.”

The three crew men turned and ran back toward the onlookers.

“You best all get on deck,” Campbell told them. “Report to your life stations.”

“Why? It’s raining outside. Anyway, I want another drink ’”

The man’s drunken demand faded as a fork of flame darted out from the smoke.

Panic had arrived on the Morro Castle.

Want to keep reading? Download Shipwreck: The Strange Fate of the Morro Castle.

This post is sponsored by Open Road Media. Thank you for supporting our partners, who make it possible for The Lineup to continue publishing the true crime and creepy stories you love.