His houseguest was convicted of the murder. But evidence against the doctor’s wife tells another story.

Drifter and conman Lino Espos y Mina came to the Chapmans’ Pennsylvania home in 1831, seeking a place to stay. And it was love at first site for the doctor’s wife Lucretia Chapman, an overworked, mother of five.

The night after Lino purchased arsenic from a drug store, Dr. William Chapman (pictured above) became ill. To help her sick husband through a suspected bout of food poisoning, Lucretia made him chicken soup—which only made him more ill.

When Dr. Chapman died on June 22, his autopsy revealed that he had been poisoned. Lino and Lucretia were immediately targeted, and given separate, highly publicized, trials. Lino was convicted, while Lucretia was found not guilty—but key witnesses gave damning evidence against the doctor’s wife.

A neighboring poultry farmer, Benjamin Boutcher, described how over 20 of his ducks dropped dead after consuming the leftover chicken soup that was thrown out on the Chapmans’ lawn. The same chicken soup had been given to Dr. Chapman by his wife before he died.

Linda Wolfe’s well-researched and highly detailed account The Murder of Dr. Chapman immerses readers in the case, providing all the evidence, and leaving it up to you to decide the real killer.

Keep reading to see how the crime played out. Then download The Murder of Dr. Chapman on Amazon, Barnes & Noble, and iTunes. 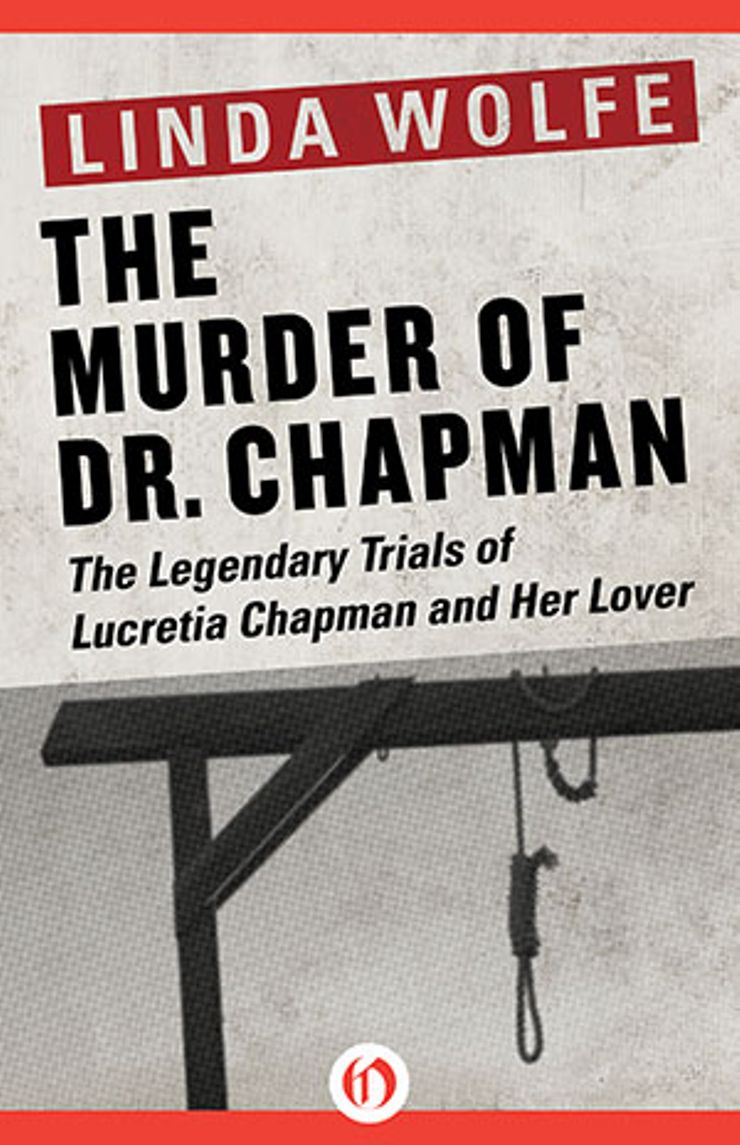 Lino requested black trousers, a vest, and a costly black frock coat from Watkinson, and on Thursday, June 16, he went into town with Lucretia to pick up the clothes. After he got them, he put them on, then he and Lucretia separated. She went to attend to some personal chores, and he went into a pharmacy on Chestnut and Sixth, across the way from Watkinson’s.

It was the handsomest drugstore in the city, the creation of Elias Durand, an émigré from France. Durand had studied his profession in Paris and served Napoleon as a pharmacist in the Grand Armée, and he still bought all his medications and chemicals from France, which led the world in the manufacture of drugs. His taste for things French was also evident in his shop’s sophisticated decor, its array of polished mahogany cabinets, marble-topped counters, and etched-glass windows and doors.

Lino had a friend at the fancy shop, a clerk named Alfred Guillou. He’d met Guillou a few weeks earlier when he’d stopped in the pharmacy to ask for street directions. The young clerk, who knew some Spanish, had considerately supplied the directions in that language, and since that time Lino had paid him several other visits. He’d chatted with Guillou about his origins and told him he was the son of the governor of California, but he hadn’t given him either his true name or his adopted name of Espos y Mina. Instead he’d said he was called Estanislao de Cuesta, just like Mexico’s consul to Philadelphia.

Today he dawdled among the shiny cabinets and finally mentioned to Guillou that he was planning to stuff and mount some birds. Arsenic was a principal ingredient in taxidermy. Lino followed his statement by asking if the shop had any of the popular arsenical soap he wanted to use.

“We haven’t,” Guillou said. “But we might prepare it.”

That wouldn’t be necessary, Lino demurred. “If you have plain arsenic powder, that would answer.”

Guillou wasn’t sure whether he ought to sell Lino arsenic itself. He said he’d ask the boss, and called over Durand.

Durand was a clever man, the inventor of an apparatus for carbonating water who would soon open the first soda bottling company in America. More, he was scientifically astute, so knowledgeable about drugs that Philadelphia’s top physicians were in the habit of asking his advice before they prescribed medicine to their patients. But he was a poor judge of intent. After peering down his long Gallic nose at his clerk’s impeccably dressed friend, he averted his gaze, turned his heavy-lidded eyes toward his shelves, and took down one of his French porcelain jars. Then he scooped some powdery salt onto his brass scale and sold Lino two ounces of arsenic.

The following night William was seized with stomach cramps and nausea. He wasn’t worried about it. Assuming that something he’d eaten had been a little spoiled, he reviewed what he’d had. Roast veal, hot boiled pork, and green peas at the midday meal. Cold pork in the evening, topped with smearcase, the creamy cottage cheese that he relished. No one who’d dined with him had a stomachache, not Lucretia or Lino or any of the children or boarding students. But none of them had eaten any of the pork, his favorite, even though he’d urged it on them, told them how very tasty it was. It must be the pork that was making him feel so bad.

A little brandy would calm his stomach, he decided, and asked Lucretia to fetch him the bottle. But even though he drank a hearty swallow, his stomach continued to feel queasy, so he asked her to get him the peppermint. Alas, she couldn’t find it, which was unfortunate, because without the mint, he stayed up most of the night vomiting, and the next morning, Saturday, he still felt sick.

That was when Lucretia suggested they send for Dr. Phillips. William didn’t want Phillips. He didn’t want any doctor. “The doctor will only give me medicine,” he grumbled. “I have drops for stomachache in the house. I’ll take those.” 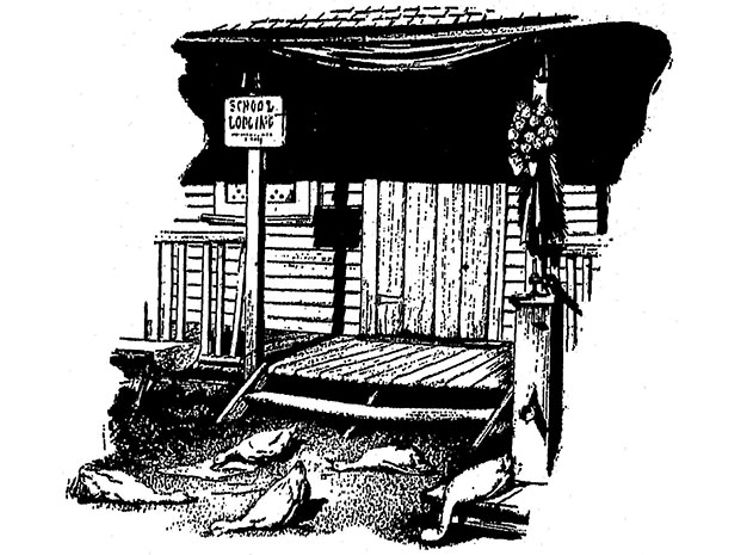 Lucretia gave him the drops, but he continued to throw up. He threw up all day, and all night, too, and on Sunday morning Lucretia insisted on getting Dr. Phillips. She didn’t consult William, just sent Lino over to Bristol, and next thing William knew, Phillips was there examining him. “You’ve had a mild attack of cholera morbus,” he said when he was done, and advised eating lightly for the next few days.

Doctors! “A beefsteak would do me more good than anything else,” he’d groused at Phillips.

After Phillips left, Lucretia went into the kitchen. She’d hired new help to replace Ellen, who’d finally quit. She’d hired Juliann, a local woman, as cook, and Ann Bantom, a black woman from Philadelphia, as part-time housecleaner and laundress. But it was Sunday, and neither Juliann nor Ann was in that day. She herself would have to cook William a meal, a light meal as Dr. Phillips had recommended. She decided on rice gruel, boiling the grains until they were soft and letting little Lucretia, who liked helping out in the kitchen, pound them in the mortar until they formed a smooth, gluey porridge.

The next morning Ann came to work but Lucretia still had no cook—Juliann had sent word she was sick. There was nothing for it but to do the cooking herself again. What to make for William? Going across the road to the poultry farm of her neighbors, the Boutchers, she bought a chicken, then hurried home and set about making the chicken soup Dr. Phillips had recommended.

She made a bland concoction, simmering the bird merely in salted water. But by the time the chicken was cooked through, its flavor had transformed the liquid into a rich broth. She added some seasoning, poured her soup into a pretty blue bowl, placed the fowl on a separate plate, carried both dishes to the parlor, and asked Mary to take the meal upstairs to her father.

Little Lucretia was keeping William company when Mary arrived with the food. The two girls got him up, sat him in the rocking chair, and made his bed. Then Mary took advantage of her position as elder sister and assigned Lucretia to help their father eat.

Still, he ate slowly at first. He started with the gizzard—he was partial to gizzard. But he said this one was tough, so he gave the rest to her, and soaking a cracker in the soup the way her little brother John used to do when he was a baby, gummed the broth-drenched biscuit. The sucking made his appetite return and soon he was ignoring the soup and tackling the chicken again. He seemed very hungry—he ate all of the breast and part of the back.

When he was done with his meal little Lucretia hefted the heavy blue bowl and the plate of leftover chicken, carried her burden gingerly down the stairs, and set it on the kitchen table. Then she skipped back upstairs to her father.

He didn’t seem so well now, she thought when she scuttled into his room, not so well as he’d been before he’d eaten.

Want to keep reading? Download The Murder of Dr. Chapman on Amazon, Barnes & Noble, and iTunes.