We sat down for a special Father's Day-themed interview with the author of 40 Thieves on Saipan. 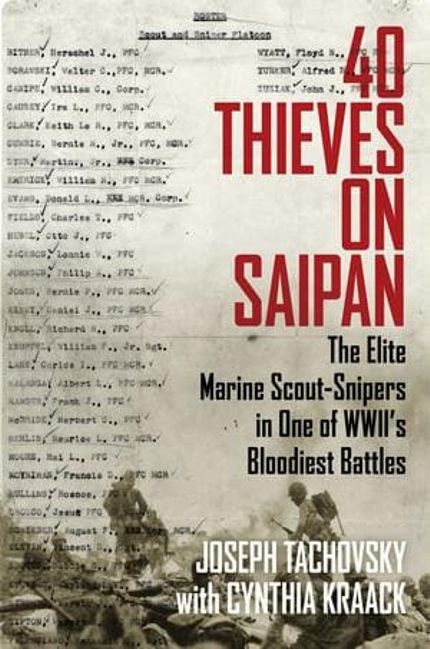 How did writing about your father change the way you view him?

I had always revered my father. I was quite proud of him being a colonel in the Marine Corps. But as a child you only really know a parent from the moment you become aware and from then on. I really had no idea of who he was as young man or how he became to be Colonel Francis J Tachovsky, USMC.

The names of the islands that he fought on, Guadalcanal, Tarawa, Saipan, and Tinian, were just names of places to me with no other meaning other than a battle had been fought there. Attaching names and faces of his friends who were killed in those battles, and the names and faces of the other men from the 40 Thieves who watched friends die while in combat, made me grow a greater respect for my father and all of the men from his platoon. And the word “respect” is not a strong enough sentiment.

Related: The Ghost Army: How One WWII Unit Fooled the Entire German Army

Has diving into this topic changed the way you think or write about history?

What was eye-opening was to first read the historical accounts of Guadalcanal or Tarawa or Saipan that detailed generic troop movements and the battles that were waged on those islands. After speaking with the surviving Thieves, those battles became much more personal knowing what those men went through and what they sacrificed for the United States. It was no longer Guadalcanal, it was Dad’s buddies Bill Jewell and Larry Le Sage getting killed, one by a sniper’s bullet the other by a land mine. On Tarawa, it was his best and most respected buddy from Officers’ Candidate School, Pappy Morehead, whose landing craft hit an underwater mine. On Saipan it was another OC buddy Joe Dulcich having his spine severed by shrapnel, his company Captain Harry Edwards dying when the Navy mistook a campfire at his company HQ and dropped a 500lb bomb on it….and five boys from his platoon dying in combat. And not only the names, but those names were accompanied by faces in sepia-toned photographs.

Related: The Best War Books of All Time, from the Revolutionary Era to Today

Was there anything you discovered that was difficult for you to digest or confront?

The hardest thing to digest was the damage done to these 18- and 19-year-old boys. In two brief years, they had lived a lifetime. I suppose it’s no different for the brave young men and women who serve our country today.

All of my old Leathernecks would suffer nightmares even into their 90s. That made this project a double-edged sword—knowing that interviewing these men and them telling of their war experiences could spur recurrences of their terrible nightmares. Nonetheless, the surviving Thieves were undaunted in the opening of old wounds to share their stories despite the nightmares, whether it was Roscoe Mullins’s of the officers tomb, or Bob Smotts chasing Japanese through the elephant grass, or Marvin Strombo’s and his first banzai.

Did you learn anything new and more personal about your father while writing and interviewing for this book, and what was that experience like?

Everything I learned about my father while researching the 40 Thieves was a revelation, because he rarely spoke of his experiences in the Pacific. I learned more about my father from the men with whom he served then I ever did from him. Bob Smotts put it best when he said, “No one ever talked much about the war. Personally, I never did because I thought I was beyond redemption for the things that I had done. Killing is nothing to brag about. And I’ll tell you one thing that you can take to the bank - those that brag the most about the things that they done, did the least.”

Related: 12 War Books by Those Who Were There, from WWII to Vietnam

What was it like reconnecting with your father through others’ memories of him?

Meeting all the old members of my father’s platoon was something I will cherish for the rest of my life. They were amazing men with amazing stories. With every one of them I feel that they are “my boys” in proxy and think of them only as a “crazy bunch of kids who could give a damn.” I have developed many second families.

Why do you think your father never told you about his experiences in the military? Do you wish he had?

It is now evident why my father never spoke of the war. In a letter home to his wife Roxie, he said “No one knows what it’s like to be in direct contact with the enemy. To lose an arm or a leg is something that you can learn to live with, but the loss of your soul is something you never may recover. You won’t know until the day you meet your maker.”