The author of Band of Brothers explores the parallel lives of two formidable 19th-century warriors.

In Crazy Horse and Custer, the author of Band of Brothers profiles two of the most formidable warriors of the 19th century—Crazy Horse, the war leader of the Oglala Sioux, and General George Armstrong Custer. Ambrose notes the striking parallels between their lives, building towards their dramatic convergence during the Great Sioux War.

With the American West in high demand, Native Americans were forced to protect their lands from rival tribes and the droves of ambitious white settlers. So began the bloody fight over the fate of the Great Plains, which united Crazy Horse and Custer at its most famous skirmish. Known as the Battle of Little Bighorn, it was a legendary victory for the Native Americans, as Crazy Horse's forces defeated Custer's calvary and killed the great general himself. The following excerpt of Ambrose's dual biography gives readers a glimpse of how Crazy Horse may have achieved that, showcasing his renowned military style during a battle against the Shoshoni tribe.

Read on for an excerpt, then download Crazy Horse and Custer. 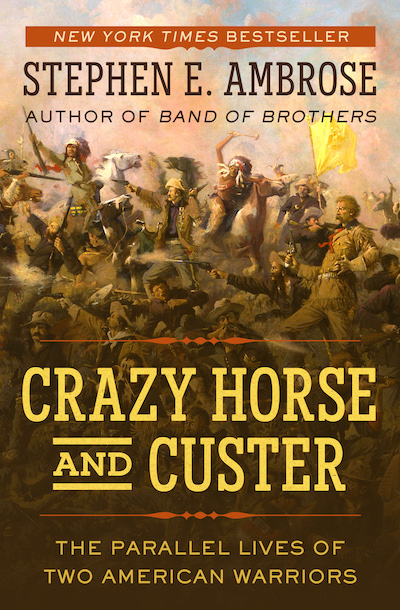 After a long march of several days, the Oglalas and Cheyennes came to the Shoshoni village. While the akicita kept the warriors under control, scouts checked on conditions in the village. They reported a large pony herd, ripe for the picking. Following a sleepless, fireless night, Crazy Horse and his comrades rode to a bluff from which, at first light, they could make out the sleeping Shoshoni camp. With a whoop, they rode at full gallop down the bluff and into the village.

The old Shoshoni women, first risers in the camp, began screaming, “The Sioux are upon us! The Sioux are here!” Dogs barked, ponies neighed, children shrieked, while the Shoshoni warriors yelled at their women to get them their weapons. The attackers never paused. Galloping through the camp, they went straight to the pony herd and cut out four hundred head, more than half the total herd and started the captured ponies back toward the bluff and the faraway Oglala territory.

The Shoshonis kept their war horses tethered outside their lodges for just such a situation, but the Sioux had stampeded most of them as well, so it took Washakie’s people some time to organize a pursuit. The Sioux were slow in getting away, however, because they had taken so many ponies that it was difficult to keep the captured herd together as they headed toward the east. Crazy Horse, along with seven or eight others, dropped behind to fight a delaying action against the pursuing Shoshonis.

It was just the sort of fight Crazy Horse loved best. He never liked to stay with the mass of warriors, preferring to do battle on his own or with only a few others. He leaped from his pony, got behind a rock or tree, and fired a dozen or so well-aimed arrows at the enemy, checking the pursuit and giving the main body of Sioux with the herd a chance to get away. When the Shoshonis pressed too close or attacked his position in overwhelming numbers, Crazy Horse jumped back on his pony and rode away. After he and the others in the rear guard had put some distance between themselves and the enemy, Crazy Horse found another protected spot and repeated the process. If a small body of Shoshonis got out ahead of the rest, Crazy Horse charged them, forcing them to fall back to their slower companions. Little Hawk, Crazy Horse’s younger brother, was along, and the two brothers fought side by side.

Want more history biographies? Sign up for the Early Bird Books newsletter, and get the best daily ebook deals delivered straight to your inbox.

Related: The True Glory of the 54th Massachusetts Regiment

As the two Shoshonis charged, Crazy Horse shouted to Little Hawk, “Take care of yourself—I’ll do the fancy stunt.” Stepping forward from his protected position, Crazy Horse stood directly in the path of a charging Shoshoni. When the man and pony were almost upon him, Crazy Horse, with his head and shoulders, feinted to his right. The Shoshoni took the fake and turned his horse in the direction he expected Crazy Horse to move. But at the last second Crazy Horse twisted to his left, grabbed the leg of the passing Shoshoni, and jerked him from the pony. The man hit the ground with a thud, knocked unconscious. Crazy Horse jumped on the Shoshoni pony, looked around, and discovered that Little Hawk had hit the other enemy with an arrow, unseating him from his pony. Little Hawk mounted up and the brothers dug in their heels and took off for the east, laughing gaily.

Still the Shoshonis came on, anxious now for revenge and desperate to get their ponies back. They were furious, too furious for their own good, because no longer did they stay together. Instead, each Shoshoni rode as fast as he could to get at the retreating Sioux, which left them stretched out and incapable of delivering a telling, collective blow.

One Shoshoni got way ahead of the others. Soon he came up on Crazy Horse and the rest of the Sioux rear guard. Instead of checking his pony and waiting for help, he came right on, riding smack into the middle of the eight Sioux. He shot one Oglala with each of his pistols before someone brought him down with a lance. The Sioux immediately recognized him as the son of Washakie and proudly took his scalp before resuming the retreat. Later, they returned the scalp to Washakie, telling him how brave his son had been.

Related: 11 Best Westerns on Netflix You Can Stream Tonight

The running fight continued for three hours. Once Washakie led his warriors around the Sioux flank, cut into the tiring herd of ponies from the side, and recaptured half the animals. Finally the Sioux found a good stand of trees along a stream and hustled the remaining captured stock into the grove, then set up a defensive perimeter around the edge of the woods. The Shoshonis charged several times but were unable to dislodge the defenders, much less get at the ponies. When darkness came the Sioux got away, carrying three dead Oglalas and one dead Cheyenne with them, along with the captured ponies. In a few days they were safely back in their own village, where they mourned the dead, then held a victory dance. Then the camp settled back into its accustomed lethargy. That was enough war for one summer.

Want more history biographies? Sign up for The Archive's newsletter and get our recommended reads delivered straight to your inbox!