Lewis Sorley offers a shocking new perspective on the Vietnam War, through access to classified documents.

Over 40 years have passed since the end of the Vietnam War, and still new information regarding the methods taken to secure a questionable United States/South Vietnam victory continues to emerge.

Award-winning historian Lewis Sorley researched the latter years of the war, 1968-1975, focusing on the movements of U.S. General Creighton Abrams, who is often overshadowed in history by U.S. General William Westmoreland. To do this, Sorley accessed classified documents previously unseen by the American public. These allowed him to gain fresh insight into first-hand accounts—including those of Abrams.

Moving, insightful, and factual, A Better War examines what it means to fight a war for a government whose credibility has been severely damaged, and for a country protesting against its involvement in the first place. Regardless of how well-versed readers already are in the events of the Vietnam War, they’re guaranteed to find something new through Sorley’s meticulous and thoughtful research.

Read on for an excerpt from Lewis Sorley’s A Better War, and then download the book. 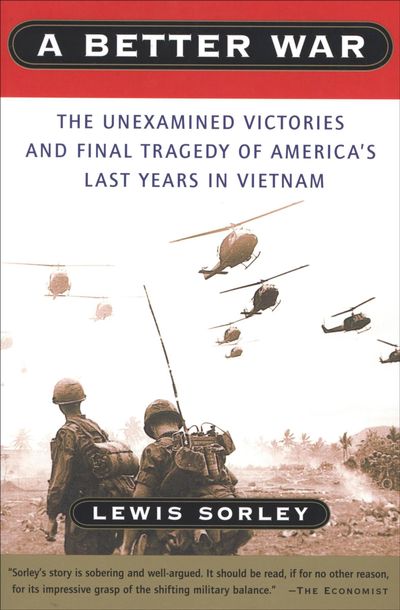 During 1967, however, very important augmentations of the American leadership in Vietnam took place, beginning in March with the appointment of Ellsworth Bunker as ambassador to the Republic of Vietnam. Bunker was a consummate gentleman and an unusual diplomat, having come to diplomacy professionally after a long and successful business career. The Bunkers were descendants of French Huguenots; the name, anglicized from Boncoeur (good heart), fit him well. Bunker had the qualities Creighton Abrams admired most—integrity, fortitude, loyalty, dedication, selflessness, and wit—and those would soon form the basis for an enduring friendship between the two men.

That same month Lieutenant General Bruce Palmer, Jr., had been ordered to Vietnam, where he soon became deputy commander of the Army component of the U.S. Military Assistance Command, Vietnam (MACV). Palmer, like Westmoreland and Abrams a 1936 West Point graduate, had gone initially into the horse cavalry and then, as had Abrams, migrated to the armored force when World War II was imminent. Known throughout the Army as a man of fine intellect and rock-solid integrity, Palmer led American forces deployed to the Dominican Republic in 1965 and there, while demonstrating sound judgment and a cool head in a confused and confusing situation, had come to know and respect Ambassador Bunker and in turn had earned the respect and liking of the older men.

In May, pursuant to Lyndon Johnson’s public commitment to strengthen U.S. leadership in Vietnam and to deploy the first team, Robert Komer was dispatched to take charge of American support for pacification, newly brought under control of the military headquarters. Komer was a professional bureaucrat who had begun as an analyst at the Central Intelligence Agency, then moved to the White House staff during Lyndon Johnsons presidency. At the same time General Creighton Abrams was assigned as deputy to Westmoreland.

These new arrivals shared an outlook on conduct of the war, an outlook much different from Westmoreland’s. Convinced that the key to winning the war lay not in the remote jungles, but rather in the hamlets and villages of South Vietnam, they set about trying to reorient the American effort.

When Abrams first arrived to be the deputy commander, Palmer took him aside. ‘I just poured out my soul about my feelings about Vietnam, the almost impossible task we had, given the national policy, limited objectives, and so on,’ Palmer recalled. “I told him I really had basic disagreements with Westy on how it was organized and how we were doing it.” Abrams listened carefully, then replied, “You know, I’m here to help Westy and, although I privately agree with many things you are saying, I’ve got to be loyal to him. I’m going to help him.” (Abrams may also have had in mind that he was scheduled to take command himself in a very short time, even though subsequently that did not happen as planned.) “This loyalty to Westmoreland,” said Palmer, “was typical of Abrams, who was first and last a soldier.”

Komer, too, was extremely critical of the Westmoreland approach to conduct of the war. “I also happen to be one of those who favored a much more small-unit war,” he said later. “Americans should have operated much more in small units as a matter of course, and with much less use of artillery and air strikes.” Subsequently Komer watched approvingly as Abrams changed the war in that way. “We complained about H&I”—harassment and interdiction—”fire, but really credit on this goes to Abrams. He very discreetly started cutting down the ammo allocations to conserve ammunition, which automatically meant cutting down H&I fire.

Abrams spent much of his year as Westmoreland’s deputy traveling the country from one end to the other, visiting South Vietnamese forces at every level in an effort to improve their leadership, equipment, and combat effectiveness. Along the way he developed a particular interest in the Regional Forces (RF) and Popular Forces (PF), the territorials who formed the first line of defense in the hamlets and villages. It reached the point, said General Walter “Dutch” Kerwin, where Abrams came to be recognized “as the man who knew more about the RF and PF than anybody else in MACV.” Later, when some of the bloodiest battles of the war took place, these territorial forces proved formidable, repaying the interest Abrams had taken in them and the priority he gave them for equipment and training.

During 1967 General Westmoreland again asked for more troops, in fact 200,000 more, which would have brought the overall total of U.S. forces in Vietnam to more than 675,000. He didn’t get them. Washington’s tolerance for further troop increases had finally been exhausted. Only a token increase was authorized as Tet 1968 approached.

Want more war stories? Sign up for The Archive's newsletter, and get our recommended reads delivered straight to your inbox.

The Tet Offensive was in many ways the watershed event of the war. The fact that the Viet Cong and North Vietnamese Army could mount a coordinated assault on most of the major towns and military installations across South Vietnam gravely undermined the optimistic assessments Westmoreland had been retailing for many months. For the general public, the government’s credibility was so damaged that forever after people were skeptical about positive military news of the war. Within the government, Westmoreland’s credibility as the field commander further declined—dramatized, someone observed, by many who had habitually called him “Westy” now referring instead to “Westmoreland”—and even the Commander in Chief’s confidence seemed badly shaken. Later bitter commentators observed that Tet had proved the domino theory, even though only one domino—Lyndon Johnson—fell as the result of it.

A “general uprising” of the populace in support of the in-vaden had been predicted by North Vietnam but failed to materialize, and without this support the offensive was quickly defeated except in two key cities, Saigon and Hue, where the fighting continued for many days. Abrams was sent to the northern provinces to take command of the battle there, operating from an ad hoc headquarters established for that purpose and designated MACV Forward. After a month of hard fighting, the last enemy troops were ejected from Hue, essentially ending the Tet Offensive of 1968.

The costs to the enemy had been enormous, later estimated at 45,000 dead or disabled, 20 percent of his total forces in South Vietnam, with more than 33,000 of those killed in action. Of particular importance were the losses sustained by the Viet Cong in the South. Anticipating the predicted “general uprising” of the population in response to the offensive, many cadres who had until then been operating clandestinely surfaced, only to be killed on the spot or identified and tracked down later. William Bundy observed that in the Tet Offensive “the North Vietnamese fought to the last Viet Cong.” The Communists in the South never recovered from the effects of these losses, progressively losing influence in a movement that was in any event directed and dominated by party leaders in North Vietnam.

As pacification progressed and recruiting became more difficult in the South, the enemy was forced to replace his losses primarily with infiltrators from North Vietnam. Over time, the ranks of the formerly “Viet Cong” units became largely populated with North Vietnamese, further diluting the influence of the indigenous insurgents. When, after many years of struggle, North Vietnam prevailed, the Viet Cong found themselves relegated to positions of no importance, an outcome dramatized by their bringing up the rear of the victory parade through Saigon.

The Tet Offensive had positive results within South Vietnam, results not confined to the heavy losses inflicted on the enemy. “This was the first time that our South Vietnamese urban population had ever experienced the hazards of real war,” noted Lieutenant General Ngo Quang Truong. The firsthand encounter with the enemy’s destructiveness and—as in his massacre of thousands of innocent civilians in Hue—his cruelty to those he supposedly sought to “liberate” radically changed the outlook of South Vietnam’s populace. This change enabled the government to decree full mobilization, something it had previously not dared attempt, so that the draftable categories were greatly expanded (set at nineteen to thirty-eight years old, compared with twenty-one to twenty-eight previously, and then eighteen to thirty-eight), and the armed forces were expanded from 600,000, eventually reaching 1,100,000. One of the great, if unremarked, ironies of the war was that the enemy’s “General Offensive/General Uprising” provoked not the anticipated uprising of the population in support of the invaders, but just the opposite—general mobilization in support of the government. “The expansion took place primarily in territorial forces which were indigenous to the areas where they were assigned,” explained the legendary John Paul Vann. An enduring government presence in the countryside was thus established.

The General Mobilization Law of June 1968 included an important provision favoring those territorial forces, the Regional Forces and the Popular Forces. Men thirty-one to thirty-eight years old could volunteer to serve in the RF or PF rather than be inducted in the regular armed forces. The incentive of remaining close to home motivated many to do so, allowing the greatly expanded RF and PF authorizations to be met.

The plan has been that when Abrams went to Vietnam in May 1967 he would, within a few weeks, succeed to the top command in place of Westmoreland. As things played out, though, more than a year elapsed before Abrams formally took command. While the evidence is strong that an early succession was intended,34 Secretary of Defense McNamara inadvertently precipitated a change of outlook on Lyndon Johnson’s part. After a July 1967 visit to Saigon, he suggested in remarks to the press that, rather than asking for additional forces, General Westmoreland ought to make more effective use of the forces he already had. Westmoreland, who happened to be in the United States at the time, objected, after which LBJ called his commanding general in for consolation and reassurance, including public expressions of undiluted support. Johnson could scarcely then relieve him, lest he give credence to critics of Westmoreland, and of himself as the man who had chosen Westmoreland and continued to back him despite increasingly widespread criticism.

Westmoreland therefore remained in command until the Tet Offensive erupted. LBJ temporized yet a while longer, probably for the same reasons as before. Then, in late March, two months after Tet began, it was revealed that Westmoreland would become Army Chief of Staff in June. On 10 April, General Creighton Abrams was announced as the commander-designate in Vietnam. There lay ahead a better war.

Want more war stories? Sign up for The Archive's newsletter, and get our recommended reads delivered straight to your inbox.